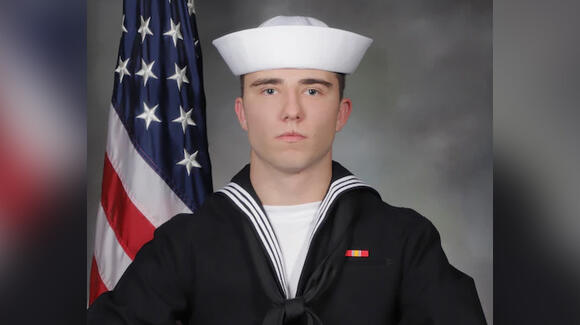 RALEIGH, N.C. (AP/WNCN) — The U.S. Navy says that a North Carolina native assigned to a guided missile destroyer was lost overboard and presumed dead in the Baltic Sea.

The Navy said that he had reported to the ship in April after training in Illinois.

WLOS-TV reports that Spearman was a 19-year-old from Etowah in western North Carolina’s Henderson County.

The family told the TV station that several generations of his family had served in the Navy.

“This bright, young man made an oversized, positive impact on Arleigh Burke. My entire crew’s thoughts and prayers are with Seaman Recruit Spearman’s family and friends. We offer our most sincere condolences for their loss,” Cmdr. Pete Flynn, commanding officer of USS Arleigh Burke said in a news release.

Two people died in North Carolina this weekend as a result of Hurricane Ian, according to officials.
CLAYTON, NC・21 HOURS AGO
CBS 17

Much like many others in North Carolina, NC Zoo rangers find themselves cleaning and picking up debris from the aftermath of Hurricane Ian.
ENVIRONMENT・1 HOUR AGO
CBS 17

‘Hurricane Ian is at our door’: Governor Cooper provides state of emergency update

The governor said emergency management officials have adapted and modified their plans for storm response as Ian’s track has shifted.
ENVIRONMENT・1 DAY AGO
CBS 17

There are fewer ‘hand-raisers’ in NC so far for new COVID-19 booster shots. Why?

The push for the new bivalent COVID-19 boosters is off to a relatively slow start in North Carolina.
PUBLIC HEALTH・2 DAYS AGO

Nearly two-thirds of North Carolina’s counties are in the CDC’s green zone with the lowest level of COVID-19 in their communities.
PUBLIC HEALTH・2 DAYS AGO
CBS 17

‘This is ridiculous’: Goldsboro home not repaired 6 years after Hurricane Matthew

With Hurricane Ian’s potential to impact North Carolina this week, survivors of recent hurricanes are watching closely as they question why it’s taking so long to repair and rebuild their homes.
GOLDSBORO, NC・3 DAYS AGO
CBS 17

VIDEO: Storm winds cause electric sparks to fly on the street in NC

North Carolina continues to deal with the impacts of Ian as the storm passed through the region throughout Friday evening and Saturday morning.
WALKERTOWN, NC・1 DAY AGO
CBS 17

Ian continues to weaken, moving away from central NC

Ian is now forecast to become a hurricane with 75 mph winds before coming ashore near Charleston, S.C. on Friday.
GEORGETOWN, SC・2 DAYS AGO

The first death associated with West Nile Virus in North Carolina so far year this year has been reported Friday, according to the North Carolina Department of Health and Human Services.
PUBLIC HEALTH・2 DAYS AGO
CBS 17

You'll be more likely to come across baby squirrels this fall, according to the North Carolina Wildlife Resources Commission.
ANIMALS・2 DAYS AGO
CBS 17

Tuesday construction began for a new symbolic symbol of freedom for all North Carolinas. Construction crew are in the process of installing its first state monument honoring African Americans.
RALEIGH, NC・5 DAYS AGO
CBS 17

Military leaders and lawmakers are meeting for the first North Carolina Defense Summit in Raleigh.
RALEIGH, NC・5 DAYS AGO

Gov. Cooper issues State of Emergency ahead of Hurricane Ian

Gov. Cooper has issued a State of Emergency for North Carolina on Wednesday ahead of Hurricane Ian's remnants moving through the state.
ENVIRONMENT・3 DAYS AGO
CBS 17

Following his declaration of a State of Emergency on Wednesday, Governor Roy Cooper and emergency management officials are providing updates to the state's efforts to prepare for impacts of Ian expected to start Friday.
RALEIGH, NC・3 DAYS AGO
CBS 17

The U.S. Department of Transportation is now giving the greenlight for all 50 states to start building a nationwide electric vehicle charging network.
RALEIGH, NC・4 DAYS AGO
CBS 17

North Carolina has a lot of work to do to meet the growing need for accessible charging stations for electric vehicles, and an announcement today indicates the accelerator is being pushed down toward meeting those goals.
TRAFFIC・4 DAYS AGO
CBS 17

Hurricane Ian is on a collision course with Florida, but we could see some impacts as far north as North Carolina.
FLORIDA STATE・5 DAYS AGO
CBS 17

These improvements are the latest sign that the BA.5 surge during the summer is continuing to fade.
PUBLIC HEALTH・4 DAYS AGO
CBS 17

Low stock stops bass fishing in this part of NC

The Division said the population is also declining because of overfishing.
HOBBIES・6 DAYS AGO