'Confident Where We Are': Will McClay Talks Cowboys Roster Changes 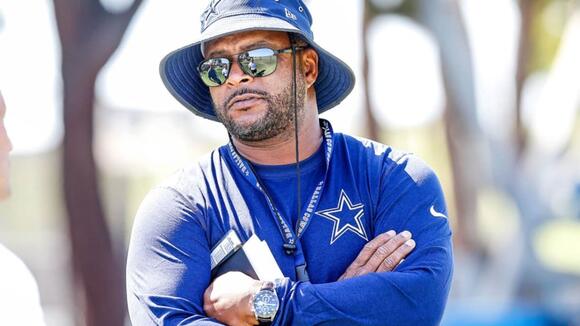 McClay is enthused by the arrival of several newcomers, even those who might be joining the program late.

As a former head coach and defensive coordinator in the Arena Football League, Will McClay is used to causing turnovers. This time around, the phenomenon wasn't as intentional.

The Dallas Cowboys personnel boss was forced to work with the departures of several notable names from a 12-win group that earned an NFC East title this offseason. Veterans La'el Collins, Amari Cooper, and Randy Gregory, key masters of the Cowboys' consistency in recent seasons, moved elsewhere for a variety of reasons.

McClay, having worked with the Cowboys since 2009, sees it as business as usual ... business he's well used to in the current role he's held over the last six years. He talked to KTCK to discuss the coming season and the challenges ahead.

"I think every year every roster is different. It’s the NFL. It’s attrition. You have to go through it," McClay said.

Despite the loss of over a decade of experience on the Dallas roster, McClay believes that the names gained this offseason have brought about a sense of balance to Dallas, which racked up strong numbers on offense but struggled to keep pace in several major defensive categories.

"In the NFL, you got to win on offense, defense, and special teams. That’s what you stress," McClay continued. "They have to come in and contribute at some level on the offensive or defensive side as well as special teams.The way that the guys have come in and the way that coaches are using them, you feel like you are able to see the talent. They’re not all going to be first-year starters when they come in, but it’s (about) what roles they feel as they’re developing."

"With the right coaching and right training, we’ll see those things quicker.”

Dallas kept a balanced draft in the spring, spending four of their first five picks on offensive contributors before using their final quartet on defenders. Blocker Tyler Smith was the first choice at 24th overall while the early offensive streak was interrupted only by EDGE man Sam Williams in the second round.

He refused to elaborate, however, on whether any one or specific draft prospect has the inside edge when it comes to potential success in the modern NFL.

"I think all of them, we have got to get something out of as many of them as we can," McClay said. "You don’t want to put any pressure on any names, but guys got to step up and play. You were drafted and you have an opportunity to be here."

McClay's interview was conducted days before the Cowboys received the bad news about receiver James Washington, who is set to miss a good portion of the season after suffering a foot injury at training camp in Oxnard. Washington was projected to be one of the top secondary options behind CeeDee Lamb prior to his departure. ... (and after the Anthony Barr signing.)

But McClay was indeed asked about one of the catchers expected to rise up in Washington's place, namely KaVontae Turpin, the leading receiver in the rebooted United States Football League for the New Jersey Generals. McClay noted that USFL games were a frequent topic of discussion among the Cowboys' decision-makers and it yielded Turpin, a TCU alum that also secured the league's MVP award.

"I think he’s a talented young player with his ability to return as well as play in the slot," McClay said of Turpin. "He gives us another option there to look at different ways you can do things and be creative with getting playmakers the ball in space. He’s got all those traits.”

Dallas will open its 2022 preseason slate on Aug. 13 against the Denver Broncos (8 p.m. CT, KTVT/NFL Network).

When the Cincinnati Bengals take on the Kansas City Chiefs in the AFC title game on Sunday night, they’ll be doing it without three of their starting offensive linemen as La’el Collins, Alex Cappa and Jonah Williams will all be sidelined from the game with injuries. The three...
CINCINNATI, OH・1 DAY AGO
Cowboys Country

Cowboys Coach Hire: Is McAdoo a Reason for Kellen Delay?

Parcells believes in the modern Dallas Cowboys but has a dire outlook for the team's rushing future.
DALLAS, TX・2 DAYS AGO
Cowboys Country

The Cowboys essentially have two routes to take regarding QB finances. Brace yourself, because March 2023 might be the time when "a new contract for Dak Prescott'' becomes a pretty common headline.
DALLAS, TX・1 DAY AGO
Cowboys Country

Should the Cowboys pay the price to trade for the cap-strapped Rams’ Jalen Ramsey?
DALLAS, TX・2 DAYS AGO
Cowboys Country

The Dallas Cowboys will be moving and shaking when it comes to Mike McCarthy and the coaching staff, as will the rest of the NFL. Follow all the Coaching Carousel action here!
DALLAS, TX・2 HOURS AGO
Cowboys Country

From Boomer Esiason: "Tom Brady is a free agent, there’s a possibility. … Could you imagine Jerry Jones and Tom Brady'' together on the Cowboys?
DALLAS, TX・1 DAY AGO
Cowboys Country

The Dallas Cowboys offensive line had a positive start to the season, but injuries to key players along the way saw Dak Prescott running for his life at times. Still, there are plenty of positives from the group.
DALLAS, TX・1 HOUR AGO
Cowboys Country

Cowboys star Micah Parsons offers an opinion on QB's salaries and accidentally creates the impression he was taking a poke at the contract of teammate Dak Prescott.
2 DAYS AGO
Cowboys Country

Cowboys Lying About Malik Willis vs. Dak in Draft?

How will we ever know if the Cowboys are telling us the truth about harboring no desire to draft an heir to Dak Prescott? Easy ...
DALLAS, TX・4 HOURS AGO
Cowboys Country

The Dallas Cowboys will be moving and shaking when it comes to Mike McCarthy and the coaching staff, as will the rest of the NFL. Follow all the Coaching Carousel action here!
MICHIGAN STATE・2 DAYS AGO
Larry Brown Sports

There was never really any doubt that Patrick Mahomes would play in Sunday’s AFC Championship Game against the Cincinnati Bengals, but the big question is how effective he will be. The Kansas City Chiefs are wondering that, too. Ian Rapoport of NFL Media said Sunday that the Chiefs were encouraged by how Mahomes looked in... The post Report: Chiefs have 1 big question about Patrick Mahomes appeared first on Larry Brown Sports.
KANSAS CITY, MO・32 MINUTES AGO
Cowboys Country

Best sportsbook promos: $3,000+ in signup bonuses on offer for 49ers vs. Eagles & Bengals vs. Chiefs

The legal online sports betting industry has continued to grow across the United States, but the sportsbook promotions haven’t slowed. More than $3,000 in signup bonuses are available for you to claim across four different sportsbooks - and they’ll all activate in time for the NFC and AFC ...
26 MINUTES AGO
Cowboys Country

Dallas Cowboys defensive coordinator Dan Quinn tells CowboysSI.com that he is returning to the team in 2023, with another season of improvement on the agenda.
DALLAS, TX・2 HOURS AGO
Cowboys Country

Pick Your Poison: Cowboys Rooting Against Both Rivals in NFC Championship Game?

Once dominant on championship Sunday, Dallas is again only a sad spectator.
DALLAS, TX・4 HOURS AGO
Cowboys Country

A new look back at the 2022 NFL Draft forces the Dallas Cowboys to make a costly (but maybe sensible) change.
DALLAS, TX・21 HOURS AGO
Cowboys Country

Whether the Cowboys choose to plug roster holes in free agency with veterans or in the draft with possible project players, one thing is certain: Dallas has to improve the roster, period.
DALLAS, TX・1 DAY AGO
Cowboys Country

The two Dallas Cowboys quarterbacks both saw game time this season, but how did they both perform? An inside look at Dak Prescott and Cooper Rush.
DALLAS, TX・20 HOURS AGO
Cowboys Country

"I don't want to play this game today,'' Cowboys coach Mike McCarthy said in answer to a CowboysSI.com question about the job security of his offensive coordinator. “Kellen Moore, just like the rest of the coaches, will be evaluated.”
2 DAYS AGO