Jeff Foxworthy on the state of comedy, Jay Leno's cars, and his history with KMOX 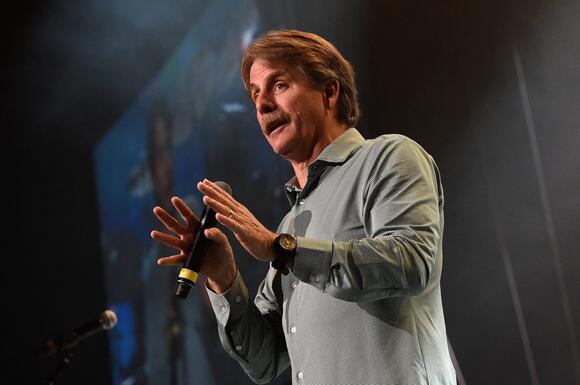 Comedian Jeff Foxworthy is making a stop at the Fabulous Fox this fall with Jay Leno. Foxworthy, a radio veteran and Georgia native, joined The Show on KMOX ahead of his St. Louis visit in November.

"I have such a sweet spot for KMOX," Foxworthy said. "In my early days, and we're going back to like, the 80s when nobody knew who I was, I used to come in there and I would pretend to be a truck driver."

While he would get on the air and always make people laugh, it later struck him that the bit wasn't helping his career at all -- he was using fake name, so nobody knew who he was.

Foxworthy talked about his friendship with Jay Leno -- and Leno's collection of sportscars.

"The man wipes his butt with 80 cars, he has like a billion cars," Foxworthy joked. "I've never seen so many cars in all my life."

Foxworthy talked with The Show about his career, the current state of comedy, and more. Listen to their conversation below, and find tickets for tickets to his upcoming show here .

Tim Norman testified in his own murder-for-hire trial, telling a St. Louis jury he had nothing to do with his nephew’s death. The reality TV star is accused of arranging the murder of Andre Montgomery to cash in on a $450,000 life insurance policy.
SAINT LOUIS, MO・11 DAYS AGO
The US Sun

JEOPARDY! fans were outraged that Martha Bath, a 1-day champ with an amazing secret backstory, lost for what many said was an unfair reason. Before the shock loss, she astounded host Ken Jennings with a story about the game show. Jeopardy!'s shiny new season premiered on September 12th and alum...
TV SHOWS・2 DAYS AGO
KMOX News Radio

The rapper was performing at the Enterprise Center when he fell into a hole on the stage and reportedly injured some of his ribs. He explained what happened in a video on Twitter.
SAINT LOUIS, MO・5 DAYS AGO

Total Information AM Weekend host Scott Jagow – not a St. Louis native – is hitting the streets to explore all the region has to offer. Each week, he’ll wind up somewhere new, learning something else about the city he now calls home.
SAINT LOUIS, MO・6 DAYS AGO