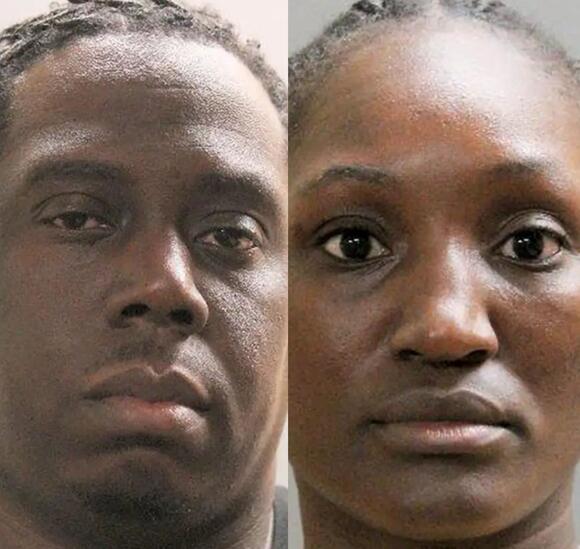 Investigators found out about the trafficking scheme after search warrants were executed in March 2021 as part of an investigation called "Operation Honeycomb" that led to the indictments of 40 people for allegedly distributing drugs in the Hempstead area, including nine charged as major traffickers.

Eventually, authorities learned that pounds of cocaine and fentanyl originating in Southern California were being sent through the United States Postal Service to addresses in New York.

Disc jockey Lance Holmes, 40, met up with Lewis at various points along her route to allegedly transfer the narcotics, and Lewis was allegedly paid $500 for every successful delivery.

The packages, all of equal weight, were shipped via priority mail, in medium flat rate postal boxes, and originated from shipping stores in California, the DA's office said. The people at the Hempstead addresses were not involved in this alleged trafficking scheme.

Several packages destined for Hempstead and surrounding areas were intercepted from the mail-stream and K9 units from the Nassau County Police Department and New York State Police conducted sniff tests with the dogs, who returned positive alerts for narcotics.

In a bold move, prosecutors allege Lewis, of Rockville Centre, allegedly contacted the postal office on June 7 to inquire about a parcel that was destined for a Manhattan address. The package containing two kilograms of cocaine was intercepted prior to his receiving it.

In total, 10 kilograms of cocaine, around 22 pounds, and one kilogram of fentanyl, around two pounds, were seized during the investigation.

"Dismantling the narcotics trade is difficult and dangerous work, and I thank our numerous partners for helping end the flood of illegal drugs into our county," Donnelly said in a statement.

Holmes pleaded not guilty Wednesday to acting as major drug trafficker, two counts of first-degree attempted criminal possession of a controlled substance, as well as second- and fourth-degree conspiracy. If convicted of the top charge he faces a potential maximum of 25 years to life in prison.

A source at SiriusXM told 1010WINS on Friday that Holmes, "who was a part-time independent contractor," "was suspended effective immediately."

Two men were arrested Wednesday after a Brooklyn pastor and his wife were robbed at gunpoint of more than $1 million in jewelry during a livestreamed church service in July.
BROOKLYN, NY・21 HOURS AGO
1010WINS

A Manhattan food court with multiple vendors was robbed overnight and police are searching for the suspects responsible.
NEW YORK CITY, NY・16 HOURS AGO
1010WINS

The driver was operating a bus at W. 162nd Street and Edgecombe Avenue in Washington Heights on the morning of Sept. 15 when the man gestured for him to stop around 9:30 a.m.
NEW YORK CITY, NY・3 HOURS AGO
1010WINS

The officer had pulled over the 40-year-old driver’s gray Ford van on Clinton Avenue, near E. 181st Street, in the East Tremont section shortly after 8:15 a.m.
BRONX, NY・22 HOURS AGO

'Do you want to get tased?': 2 women try to steal from SI JCPenney, threaten security

Police are searching for two women who tried to make off with about $1,300 worth of items from the JCPenney at the Staten Island Mall last week.
NEW YORK CITY, NY・20 HOURS AGO
1010WINS

Police released video Wednesday of a suspect seen shooting his gun while riding on a moped with another man in the Bronx on Sunday.
BRONX, NY・21 HOURS AGO
1010WINS

An off-duty NYPD officer facing hate crime charges in Brooklyn after allegedly knocking a man unconscious while spewing anti-Muslim slurs during a road rage altercation has been fired.
BROOKLYN, NY・21 HOURS AGO

NJ man gets 11 years in prison after caught transporting guns from Georgia: AG

A New Jersey man has been sentenced to 11 years in state prison for illegally transporting five guns and an assault rifle into New Jersey from Georgia, the state attorney general’s office said Tuesday.
GEORGIA STATE・1 DAY AGO
1010WINS

A 45-year-old New Jersey man was sentenced to 14 years in federal prison Friday for his role in trafficking large quantities of heroin into New Jersey, officials said.
WATCHUNG, NJ・2 DAYS AGO
1010WINS

The NYPD released surveillance video of a man who is wanted for assaulting a hairstylist during a robbery inside a Brooklyn beauty shop last week.
BROOKLYN, NY・1 HOUR AGO
1010WINS

A 23-year-old man was followed, sucker-punched and robbed inside a Brooklyn apartment building earlier this month, police said Wednesday.
BROOKLYN, NY・23 HOURS AGO

A 56-year-old Bronx man was sentenced to eight years in prison for slashing a man in the face in Queens while shouting homophobic and racist slurs, the Queens District Attorney’s Office announced Tuesday.
QUEENS, NY・1 DAY AGO
1010WINS

An Upper Manhattan smoke shop customer was menaced at gunpoint by a robbery trio that police say is behind two other recent stickups.
NEW YORK CITY, NY・1 DAY AGO
1010WINS

A Bronx man was sentenced to up to 22 years in prison for recklessly driving a stolen box truck in Queens and Brooklyn and fatally crashing it into a vehicle, Queens District Attorney Melinda Katz said Wednesday.
QUEENS, NY・18 HOURS AGO
1010WINS

VIDEO: Man slapped by suspect who made anti-gay remarks at Midtown coffee shop

The NYPD on Wednesday released surveillance footage of a gunpoint robbery inside a Queens store earlier this week, authorities said.
QUEENS, NY・1 DAY AGO
1010WINS

One person was killed and another was injured after a fire engulfed a Hempstead home early Monday.
HEMPSTEAD, NY・2 DAYS AGO
1010WINS

Police have arrested a man who beat his 37-year-old boyfriend to death in their Bronx apartment Saturday.
BRONX, NY・2 DAYS AGO
1010WINS

A 63-year-old woman was robbed while at a memorial service and then assaulted when she confronted the thief on Saturday evening, authorities said.
QUEENS, NY・19 HOURS AGO