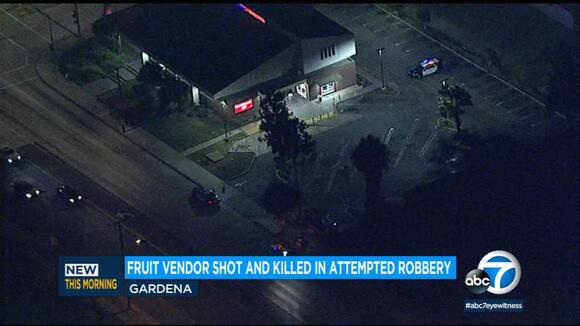 A local fruit vendor was fatally shot during a robbery attempt in Gardena, officials said. According to the L.A. County Sheriff's Department, the victim was killed during an attempted robbery. The vendor was described to be in his 30s. His identity was not immediately released. The incident occurred at approximately 6 p.m. Thursday near the intersection of Rosecrans Avenue and Main Street. The vendor was shot in the chest and died at a local hospital. A well-known street vendor advocate, Edin Enamorado, said he's been in contact with the vendor's family and his first name is Elias. Authorities are searching for two men in connection with the shooting. Investigators are also searching for the murder weapon. A Gofundme page was created to help the family. If you have relevant information about this case, you're encouraged to contact the L.A. County Sheriff's Department's Homicide Bureau at (323) 890-5500. If you prefer to provide information anonymously, you can call Crime Stoppers at (800) 222-TIPS (8477). Follow Eric on social media: Facebook.com/abc7eric Twitter.com/abc7eric Instagram.com/abc7eric

Condolences to the family,So for $75 you kill a man who is basically just trying to feed his family, Lord help Us!

Los Angeles Police says the man got into some sort of altercation with two other people, a man and a woman, when the man pulled out a gun and stabbed the victim multiple times.
LOS ANGELES, CA・14 HOURS AGO
ABC7

An emotional vigil was held for the 28-year-old mother who was fatally shot inside a car that crashed into a hydrant outside a fire station in South Los Angeles.
LOS ANGELES, CA・18 HOURS AGO
ABC7

CHP pinned a stolen SUV on a cul-de-sac in Monterey Park after a chase through Los Angeles County Friday evening.
MONTEREY PARK, CA・1 DAY AGO
ABC7

A man was hospitalized in serious condition after being shot multiple times at a youth football game in Ontario, authorities said.
ONTARIO, CA・14 HOURS AGO

15-year-old killed in Hesperia shootout was likely unarmed as she ran toward deputies, report says

The Fontana teenager killed this week alongside her father in a shootout with law enforcement in Hesperia was likely unarmed as she ran toward deputies, according to a new report.
HESPERIA, CA・1 DAY AGO
ABC7

Suspect allegedly shoots at police, then crashes at end of chase in South LA

A suspect wanted for shooting at police was arrested after a chase ended in a violent crash in South Los Angeles Thursday night.
LOS ANGELES, CA・2 DAYS AGO
ABC7

Police are searching for a homeless man accused of attacking and beating a 74-year-old security guard in Pomona.
POMONA, CA・2 DAYS AGO

A suspect was detained Thursday afternoon after a gunman opened fire on three Angeles National Forest contract workers in the mountain area above Azusa, authorities said.
2 DAYS AGO
ABC7

A man wanted in connection with the killing of rapper PnB Rock was apprehended in Las Vegas but police say his 17-year-old son was the actual gunman.
LAS VEGAS, NV・2 DAYS AGO
ABC7

A man dubbed the "Blue Cloth Bandit" for his alleged habit of using a cloth to cover a handgun during a string of more than five dozen robberies over a span of nearly two years was in custody.
LOS ANGELES, CA・3 DAYS AGO

Amber Alert issued for teen believed to be with father, who's accused of killing woman in Fontana

Police say 45-year-old Anthony John Graziano, who allegedly killed a woman in Fontana, is on the run with his 15-year-old daughter Savanna.
3 DAYS AGO
ABC7

A 17-year-old boy and his stepmother have been arrested in connection with the murder of rapper PnB Rock, who was shot at the Roscoe's Chicken & Waffles in South Los Angeles.
LOS ANGELES, CA・3 DAYS AGO
ABC7

The 101 Freeway in Encino shut down in both directions this weekend to accommodate the demolition of a pedestrian bridge, Caltrans announced.
LOS ANGELES, CA・12 HOURS AGO
ABC7

Mutilated birds found along Manhattan Beach may have been part of Santeria ritual, police say

Authorities found 10 different types of dead birds, many of which were decapitated, along the beach that may have been used for a Santeria ritual, they said.
MANHATTAN BEACH, CA・3 DAYS AGO
ABC7

A stretch of the 101 Freeway has reopened ahead of schedule following an overnight closure in both directions to accommodate the demolition of a pedestrian bridge.
LOS ANGELES, CA・47 MINUTES AGO
ABC7

Two years ago two young boys were struck and killed by a speeding car as they crossed a Westlake Village street.
WESTLAKE VILLAGE, CA・2 DAYS AGO
ABC7

The status of COVID-19 in Los Angeles County is looking good on many fronts, except for one which is troubling health officials.
LOS ANGELES COUNTY, CA・2 DAYS AGO