Bear sightings caught on camera in the Cuyama Valley 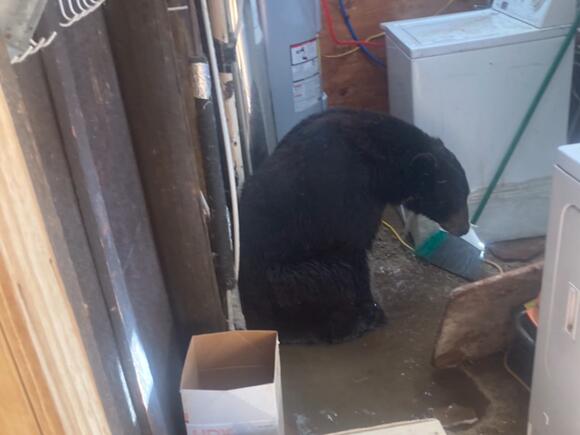 Bears are wandering further into the Cuyama Valley as drought conditions intensify.

A bear broke into a laundry room and snapped a water pipe Wednesday morning.

Residents say there have been multiple sightings in recent months.

A black bear was recently caught napping in a pistachio orchard owned by Megan Harrington’s father.

“So, my dad sends me videos every time he sees him, he’s been seeing him in the pistachio orchard for maybe the past month or so,” said Harrington.

People who live in Cuyama say that bear sightings are becoming more and more common.

“We also had a bear in town a couple of months ago too,” said Harrington. “He came down into the town site and he was in people’s backyards-- kids were getting on the bus and saw him and it was crazy.”

This week came another unusual sighting with a bear entering a home in Santa Barbara Canyon, just after 6:30 Wednesday morning.

“When crews arrived on scene, they saw residents hiding in their car in a safe spot which was very smart of them,” said Scott Safechuck, public information officer for the Santa Barbara County Fire Department. “As they approached the house, they saw a bear sitting on a broken water pipe and it was described as the bear was just relaxing and enjoying the cold water on its bottom.”

Crews quickly came up with a plan to get the large animal out.

“They were able to figure out a plan, go around the side of the house, open up a window and use the screen of that window to tap the bear on the head,” said Safechuck. “The bear scooted out the open door.”

Wildlife experts say that drought and heat are driving animals onto properties in search of water.

“These animals can normally go to a creek or reservoir to drink and they just can’t anymore so they’re getting it from our irrigation systems, our bird baths, our pools and things like that,” said Emily Taylor, professor of biological sciences at Cal Poly.

In this case, the bear was likely just trying to cool off.

“This bear, in particular, looked like it might have wanted to cool down. It had its but sat on the ground on the cool water and it was probably using that cool water to cool off,” added Taylor.

No aggressive behavior has been reported in recent sightings.

Residents hope it stays that way and say it’s a sight to enjoy.

“I think it’s pretty cool, everybody’s taking pictures and videos,” said Harrington. “We are the Cuyama Valley Bears, I wore my shirt for the occasion.”

Experts say you can leave water out for wildlife--just make sure it’s at least a quarter mile from your home.

The inaugural Surfing for Hope Longboard Classic kicked off Friday in Pismo Beach and will continue on Saturday.
PISMO BEACH, CA・1 DAY AGO
KSBY News

Parklets are likely to become a permanent part of Arroyo Grande. The city council approved a permanent parklet program at its meeting on Tuesday.
ARROYO GRANDE, CA・1 DAY AGO

Concerns about rainbow fentanyl are on the rise

Over the next few days, people in Santa Maria and Orcutt may see and hear more planes flying overhead.
SANTA MARIA, CA・1 DAY AGO
KSBY News

Hundreds of cyclists to use local highways this weekend

A Firefly rocket lifted off from Vandenberg Space Force Base early Saturday morning and reached orbit, according to Firefly.
LOMPOC, CA・1 DAY AGO

Local seniors can show off their best dance moves at a Senior Dance hosted by the Lompoc Senior’s Club on Sunday, Oct. 2nd.
LOMPOC, CA・1 DAY AGO
KSBY News

Lompoc City Library to be renovated after receiving grant

The Lompoc Public Library will see renovations in its heating, ventilation, air conditioning, and restrooms after receiving a Building Forward Grant from the California State Library.
LOMPOC, CA・3 HOURS AGO
KSBY News

The automotive classic returned to Trilogy at monarch dunes in Nipomo for the 5th year on Sunday, Sept. 25.
NIPOMO, CA・6 DAYS AGO
KSBY News

Temporary parklet program coming to an end in Pismo Beach

Restaurants, cafés and bars in Pismo Beach have until October 3rd to take down their outdoor dining areas.
PISMO BEACH, CA・8 DAYS AGO
KSBY News