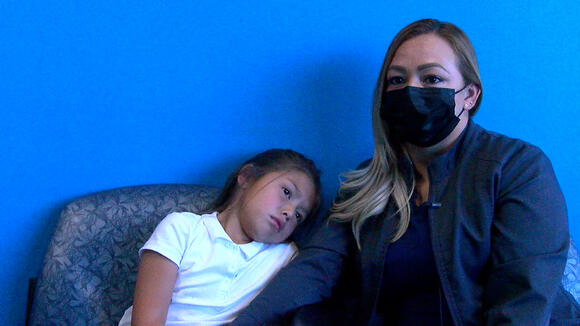 EL PASO, Texas – The parents of a 7-year-old girl are speaking out after they say their daughter was dropped off at the wrong bus stop, waiting for hours until her parents found her.

On Tuesday, the girl was going to take the bus after school for the first time, according to her parents. The girl is a second grader at Loma Verde Elementary School in the Socorro Independent School District.

Cecilia Gomez, the girl's mother, had learned in the morning that her bus number had changed due to technical problems and had instructed her daughter which bus she needed to board instead.

When the girl boarded the bus later that day, Gomez said the driver didn’t ask her daughter for a name and didn’t keep any record of her.

After the girl didn't arrive at the bus stop where she was waiting, Gomez knew something had happened. She headed to the school immediately.

Gomez said school officials didn’t know which bus she had gotten on. Instead, officials were checking security footage to see which bus the girl had taken.

“They were just kind of like, they didn’t know what to tell me because they didn’t have an answer for me. They kind of were talking on their own while I was waiting anxiously to know what bus. If it was a mixup, fine, but tell me where she is at or if she is coming back, but no answer at all that was scary. It was scary not to know where she was,” Gomez said.

The mother said more than two hours had passed before they located the girl.

Gomez said the father of the young girl found her waiting in a trailer park after he headed to the district's bus yard and asked bus drivers if they had seen the girl.

One bus driver said they had dropped off the girl at a trailer park nearby.

After searching the trailer park, the father would find her inside a leasing office.

Gomez said she still doesn’t know what happened, and the district hasn’t apologized or given her an explanation.

When ABC-7 spoke with Socorro ISD officials, they refused to comment on this specific case.

Andrea Cruz, the assistant superintendent of administrative services at SISD, said the school district is experiencing a bus driver shortage.

Additionally, Cruz said they are looking into the matter to make adjustments and ensure every child is safe.

The school district can careless, they are only worried about kids showing up for school so they can get paid. kids are only dollar signs.

this poor little girl got dropped off at the wrong location and is left out in this August heat without water or shade. unacceptable.

the bus driver should have every child's names and there drop off with him.its so 😢 poor little girl probably she afraid,but thank God 🙏 she's fine.

“He told me he was gonna kill me:” Dona Ana County Sheriff recordings within the last year detail turmoil between Bob, Kim Yacone

LAS CRUCES, New Mexico -- The Dona Ana County Sheriff's office has released lapel camera recordings to ABC-7 of two domestic disputes involving Bob and Kim Yacone between March and August of 2022. The tapes are from multiple calls that DASO responded to at the Yacone household, including a domestic disturbance and a suspicious person The post “He told me he was gonna kill me:” Dona Ana County Sheriff recordings within the last year detail turmoil between Bob, Kim Yacone appeared first on KVIA.
LAS CRUCES, NM・2 HOURS AGO
KVIA ABC-7

PICACHO HILLS, New Mexico - Robert Yacone is accused of shooting and murdering his wife, Kimberly Yacone. The shooting happened at their home in Picacho Hills Sunday. During the son's call to 911, you hear the stepson saying she is losing lots of blood and is dead. You hear him say she is bleeding from The post 911 call shows the shock a stepson felt when he found his step-mom shot dead appeared first on KVIA.
LAS CRUCES, NM・4 DAYS AGO
KVIA ABC-7

EL PASO, Texas– Happening Sunday a bronze statue of Mexican President Benito Juárez will be unveiled at Chamizal National Memorial in South-Central El Paso. The project is a way to celebrate the rich history of Paso Del Norte. To do this there are plans to create 12 sculptures of historical figures that had an impact The post Unveiling Ceremony of Benito Juarez Statue takes place Sunday appeared first on KVIA.
EL PASO, TX・1 DAY AGO
KVIA ABC-7

JUAREZ, Chihuahua -- The El Paso County Animal Welfare Department is developing a low-cost pet wellness clinic in Horizon city. The facility is set to be used to offer low-cost spaying and neutering, microchipping, flea and tick preventative and dewormer services to pets across the county. This clinic will be turned into the home of The post El Paso County set to create an educational pathway for Juarez veterinary students appeared first on KVIA.
EL PASO COUNTY, TX・5 DAYS AGO

LAS CRUCES, New Mexico -- A person has been taken into custody following an incident near Booker T. Washington Elementary School. Police responded this morning before 7 a.m. The school was on lockdown due to a barricaded person within 50 yards of the school playground. There were no injuries reported. This is a developing news The post Person taken into custody after incident near Booker T. Washington Elementary appeared first on KVIA.
LAS CRUCES, NM・4 DAYS AGO
KVIA ABC-7

EL PASO, Texas -- Three people were arrested in Juarez Wednesday for possession of about 12,000 fentanyl pills, two firearms, and methamphetamine. They intended to smuggle and sell the items in the U.S., that's according the Juarez Municipal Government. Officials say a 2008 Toyota Tundra truck with New Mexico license plates was pulled over in Batalla de Chamizal and The post 3 People arrested for trying to cross Fentanyl appeared first on KVIA.
4 DAYS AGO
KVIA ABC-7

LAS CRUCES, New Mexico --One person is dead after a shooting in Las Cruces. It happened Sunday night at around 8:00 p.m. at the 6500 block of Vista del Oro. Police say that one man from inside the home called 911. When crews arrived, one female was found dead at the scene. Officials say that The post Deadly shooting in Las Cruces appeared first on KVIA.
LAS CRUCES, NM・7 DAYS AGO

EL PASO, Texas - El Paso County Sheriff's deputies responded to a burglary in progress call on Sept. 18. It happened in the 3900 block of N. Zaragoza. Upon arrival, deputies found a 27-year-old man inside the property. An investigation revealed Brucker Michael James cut through the fence surrounding the business and made entry without The post Man arrested after deputies find him inside after cutting the fence around the building appeared first on KVIA.
EL PASO COUNTY, TX・6 DAYS AGO
KVIA ABC-7

LAS CRUCES, New Mexico --Hundreds of Las Crucens attended the services for Abe Romero, the Organ Mountain football player who died last week. Romero was the team captain and had been placed in a medically induced coma for three weeks after collapsing while on the field during a game against Deming in late August.  The community gathered The post Organ Mountain football captain, Abe Romero, remembered by loved ones appeared first on KVIA.
LAS CRUCES, NM・1 DAY AGO
KVIA ABC-7

EL PASO, Texas - A new European and Asian arrival has entered the animal kingdom right here at the El Paso Zoo! On Tuesday, a female Przewalski’s Horse, or filly, was born. She and her mother are doing well at the zoo, and you can see the new baby today! But the birth of this The post Endangered Przewalski’s horse, native to Russia, born at El Paso Zoo appeared first on KVIA.
EL PASO, TX・4 DAYS AGO
KVIA ABC-7

EL PASO, Texas - All week long, local space enthusiasts both young and old have been able to unite and share their love for science. On Friday, with a new partnership between Insights- the company that puts on the El Paso Space Festival, and the International Airport, a family-friendly event took place in the short-term The post 2022 El Paso Space Festival partnered up with EP Intl. for sustainability in space event appeared first on KVIA.
EL PASO, TX・1 DAY AGO
KVIA ABC-7

EL PASO, Texas -- The Diocese of El Paso is in dire need of volunteers and is accepting donations to help deal with the increase in migrants coming to the Borderland. An El Paso Catholic Diocese spokesman said they are accepting donations, including blankets, clothes, food, toiletries, cleaning supplies and money. They are especially in The post El Paso Catholic Diocese seeks volunteers, donations to help support migrants appeared first on KVIA.
EL PASO, TX・11 DAYS AGO
KVIA ABC-7

EL PASO, Texas -- ABC-7 got a closer look at the reopening of the 1st Armored Division museum at Fort Bliss. It was closed for two years due to COVID-19 and facility repairs. The Fort Bliss and Old Ironsides museum reopened its doors in July. "We educate the community not only about the army presence here The post 1st Armored Division and Fort Bliss museum reopened appeared first on KVIA.
FORT BLISS, TX・7 DAYS AGO
KVIA ABC-7

EL PASO, Texas -- El Paso County Commissioners are set to discuss the increase of migrants in El Paso County. An emergency item was added to Thursday's agenda in response to the surge of asylum seekers entering our region. U.S. Customs and Border Protection officials have released hundreds of migrants to the streets as a The post El Paso County Commissioners address migrant surge in El Paso streets; give update on county processing center appeared first on KVIA.
EL PASO COUNTY, TX・11 DAYS AGO
KVIA ABC-7

EL PASO, Texas -- Mexican Independence day lands on September the 16th but El Paso wants to get the party started early. Happening today, you can celebrate the famous "Grito" right in the heart of downtown El Paso at the San Jacinto plaza. There will be food vendors, music and much more for you and The post Celebrate Mexican Independence day here in the Sun City appeared first on KVIA.
EL PASO, TX・11 DAYS AGO