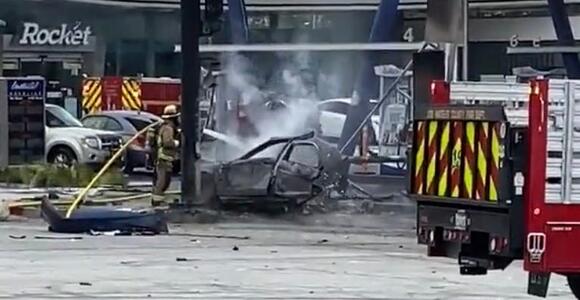 One witness told KNX News that a Mercedes going 100 miles per hour caused the collision.

Geovanni Sanchez of the Los Angeles County Fire Department told KTLA that officials are calling it a “multi-casualty incident." It's being reported as many six cars were involved in the collision.

One photo shared by Brian Douglas showed one the cars involved in the crash crumbled and charred, smoke rising as a firefighter doused it with water.

Slauson and La Brea avenues will be closed. Drivers are encouraged to use La Cienga.

An attempted home invasion was thwarted today in the Hollywood Hills when someone inside the targeted residence fired shots at the suspected robbers.
PUBLIC SAFETY・4 DAYS AGO
KNX 1070 News Radio

Murder charges were announced Monday for the woman accused of causing the deadly Windsor Hills collision on Thursday that killed six people - including an infant and pregnant woman -and injured several people.
LOS ANGELES, CA・6 DAYS AGO
KNX 1070 News Radio

Six people, including an infant and a pregnant woman, were killed and eight other people were injured in a fiery multi-vehicle crash caused by a speeding car that ran a red light in the unincorporated Windsor Hills area.
LOS ANGELES COUNTY, CA・9 DAYS AGO
KNX 1070 News Radio

A man was arrested on suspicion of murder after one of the children he was babysitting was found dead near railroad tracks in Northern California, deputies said.
UKIAH, CA・6 DAYS AGO

"Real Doctors Against Oz" campaign claims Dr. Oz is not a real doctor

A group of physicians claim that Dr. Mehmet Oz is not a “real doctor” and that electing him to the U.S. Senate would pose “a major threat to public health.”
PENNSYLVANIA STATE・3 DAYS AGO