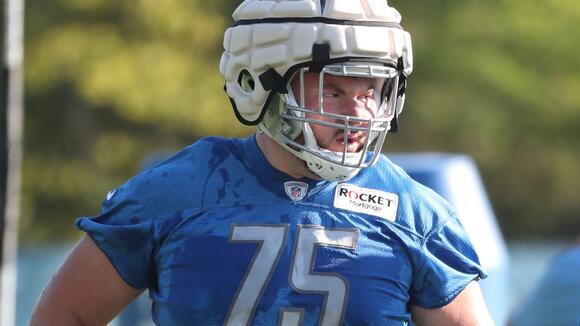 Kevin Jarvis stayed on the practice field for extra work Thursday, then trotted off with offensive quality control coach Steve Oliver, deep in conversation about what improvements he could implement for the next day.

A former Michigan State football offensive lineman who signed with the Detroit Lions as an undrafted free agent, Jarvis is fixated on daily improvement in his first NFL training camp. He'll gladly spend extra minutes — even after the longest practice the Lions have run this preseason — working on his technique and learning.

"I'm just trying to do anything I can to stay here," Jarvis said. "And that's what it's gonna take, is to put in some extra time, because obviously, I'm not where all the starters are at, so just trying to get there."

Jarvis developed his work ethic as a kid, when he took out the garbage and swept and mopped the floor at a Moose Lodge on Sunday mornings. He also watched how hard his mother worked; she was a police officer in Chicago for 21 years.

"Doing this isn't really tough compared to what they do a lot of the time," said Jarvis, who studied criminal justice at MSU and might pursue a career there after football.

Jarvis is locked in on football for now, although along the way, he'd love to crack the Wikipedia page of his other alma mater, Maine South High School. Former U.S. First Lady Hillary Clinton graduated from Maine South, as did a handful of former pro baseball players and Olympians.

However, only two alums have played in an NFL game, and none since 1988, the most notable being Dave Butz, a defensive lineman drafted No. 5 overall in 1973. Jarvis could become the first Maine South grad to play an NFL game on offense this fall.

"That's something kind of big because it doesn't really happen too often, I guess," Jarvis said. "So, just trying to make people proud."

The Lions' starting offensive line of Penei Sewell, Halapoulivaati Vaitai, Frank Ragnow, Jonah Jackson and Taylor Decker could be one of the league's best this season. That group didn't play a single snap together in 2021 due to injuries.

"You never know what's gonna happen," head coach Dan Campbell said Wednesday. "(Injuries) happened last year, so we gotta be ready to go and have the next guy up and find out who (those) sixth, seventh guys are behind them."

Evan Brown and Matt Nelson have solidified spots as the backup center and swing tackle, respectively. But there's still opportunity for Jarvis, who has received some first-team snaps during training camp.

Jarvis' versatility helps his case. At MSU, he made 39 career starts — 25 at right guard, three at left tackle and 11 at right tackle.

"Just being able to show that I can do a lot," Jarvis said of how he can carve out a reserve role. "I can play both tackles, both guards and center possibly too, so just kind of showing that and just being willing to do anything I'm asked of."

Vatai has taken notice of how those behind him on the depth chart, like Jarvis, are preparing.

"It’s really good, they’re treating themselves like they’re starters," Vatai said. "Which is good, because if one of us is down, we can trust them to fill in to help us win games. They understand the game speed, how the game flows and it’s really good for them.

But the goal is for the starting five to play together all season, and Vatai can easily point out the benefits that would provide.

Center Frank Ragnow, who missed 13 games last season with a toe injury, is superb at identifying defenses and putting the other linemen in the right positions. In turn, the line gives quarterback Jared Goff more time to make his reads.

The O-line's proficiency is being tested in practice by the Lions' defense. Vaitai has occasionally sparred with first-round draft pick Aidan Hutchinson, who has slid inside from defensive end on a few plays.

Ifeatu Melifonwu was working out at cornerback and safety during OTAs, and that early introduction to safety helped him with the mental side of learning the new position. Safety is likely his home this season given a crowded cast of cornerbacks.

"I feel like sometimes when you're middle of the field, you don't have an exact assignment, but at corner, you're always covering the guy in front of you. You've got to just be disciplined with your eyes and stuff and stay in your pedal. It's just a little different."

Melifonwu's position switch has been going well — he even snagged a red zone interception during Thursday's practice. He likes the added responsibility that comes with communicating more, making calls and working with linebackers.

"It's just a different perspective and a different way you've got to play it," he said. "I'm getting used to it, but I just like playing football."

At Super Bowl LVII, no one is having more fun than ex-Detroit Lions CB Darius Slay

It happened once, twice, a dozen times Monday. As a crowd of reporters gathered around Darius Slay at Super Bowl LVII media night pelting him with questions, one reporter vying for the Philadelphia Eagles cornerback’s attention shouted, Hey, Darius. “It’s Slay,” Slay corrected him. ...
DETROIT, MI・1 DAY AGO
The Detroit Free Press

At 83, Lansing man will go to his 57th Super Bowl with his friends

SCOTTSDALE, Ariz. — How much has the NFL’s Super Bowl changed since its debut in 1967?  For Greg Eaton — the Lansing businessman who has attended every game and is one of three surviving members of the storied Never Miss A Super Bowl Club — it’s most obvious by the bells and whistles that go with it.  ...
LANSING, MI・10 HOURS AGO
The Detroit Free Press

Wrasslin' is back in the Motor City. One of the WWE's biggest Premium Live Events is taking place at Ford Field this summer. On Aug. 5, WWE's SummerSlam event will take place at Ford Field, marking the first PLE to take place inside the home of the Detroit Lions for the first time since WrestleMania 23 in 2007. It also marks 30 years since the last SummerSlam event took place in the Detroit area, back in...
DETROIT, MI・1 DAY AGO
The Detroit Free Press

Michigan football is getting one of their former assistants back in Ann Arbor. Chris Partridge, a renowned and nationally recognized recruiter, has rejoined the Michigan staff for an undisclosed role, the program announced on Wednesday. “Chris has been a trusted agent, known friend and ally since we started working together in 2015,”...
ANN ARBOR, MI・3 HOURS AGO
The Detroit Free Press

Former Michigan basketball guard Demetrius Calip, who played a role on the 1989 national championship team, has died, the program confirmed on Monday. He was 53 years old. The former Flint Northern star played four seasons at U-M, starring as a senior when he averaged a team-leading 20.5 points per game. Calip scored 28 in his final college game, a loss to Colorado in the 1991 NIT. He played just seven games in the 1991-92 season for the Los Angeles Lakers.
ANN ARBOR, MI・1 DAY AGO
The Detroit Free Press

According to geotagged Twitter data, Michiganders are rooting for the Kansas City Chiefs over the Philadelphia Eagles this Sunday. The betting website, "BetOnline.ag," collected data from last Sunday's game to determine which states were more #ChiefsKingdom or #FlyEaglesFly on Twitter. The data came from over 217,000 tweets that were tracked.
KANSAS CITY, MO・1 DAY AGO
The Detroit Free Press

Transfers will determine which teams win the Power Five conferences, which teams advance to the College Football Playoff and which team wins the national championship. This isn't a wild prediction. The transfer portal has revolutionized the Bowl Subdivision for better and for worse, simultaneously giving student-athletes newfound freedom to switch...
ANN ARBOR, MI・4 HOURS AGO
The Detroit Free Press

EAST LANSING — In a must-win moment, Michigan State basketball fought for its survival and avoided a potential disaster. The Spartans got off to a scorching start Tuesday night against Maryland, watched a 15-point lead evaporate, then rallied back after losing the lead midway through the second half. But it took a couple big...
EAST LANSING, MI・18 HOURS AGO
The Detroit Free Press

Troy Weaver has earned the nickname, "Trader Troy," since his Detroit Pistons general manager tenure began in June 2020. Weaver is a man who moves quietly — he signed a secret contract extension last summer that only became public a few days before Christmas — and has quickly earned a reputation for his...
DETROIT, MI・2 DAYS AGO
The Detroit Free Press

USFL 2023 schedule released: Find out when Michigan Panthers will be at Ford Field

Out of the 10-weekend 2023 USFL regular season, Ford Field will be home to the spring football league for five separate weekends, including two doubleheaders. From mid-April to mid-June, the USFL will play games in Memphis, Birmingham, Canton, Ohio, and downtown Detroit. The regular season begins with games in Philadelphia...
DETROIT, MI・1 DAY AGO
The Detroit Free Press

Last week, an ice storm left the Detroit Pistons stranded in Dallas, forcing the NBA to postpone their Feb. 1 home game against the Washington Wizards. On Monday, we learned how the league will jam this game back into the schedule. The Pistons-Wizards will meet on March 7 at Little...
DETROIT, MI・2 DAYS AGO
The Detroit Free Press