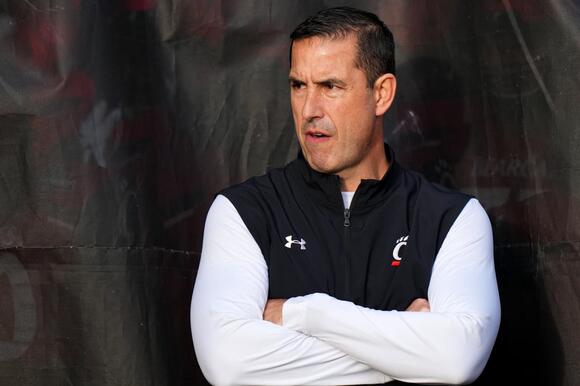 The UC head coach is confident about his team's position in the college football landscape.

CINCINNATI — The Bearcats football team wrapped up Day One of fall camp on Wednesday and head coach Luke Fickell went on SportsCenter and discussed the upcoming season.

Fickell had an interesting take on conference realignment as UC gets ready to join the Big 12 next July.

"I think it's so unique," Fickell said about all of the movement. "The great thing is, I don't think the kids get into it as much. They get into a lot of other things, whether it's the NIL stuff. But the whole idea of what's going in the realignment, the great thing is I don't think it affects the guys in our locker room.

Check out Fickell's full thoughts on the topic and much more below.

There is plenty of stuff to do around Nippert Stadium before today's game.
CINCINNATI, OH・14 HOURS AGO
All Bearcats

The full court press is on for some top basketball players in the 2023 class.
CINCINNATI, OH・9 HOURS AGO
All Bearcats

CINCINNATI — Kick-off against Indiana is quickly approaching, and we have an injury update for the Bearcats. According to The Athletic's Justin Williams, defensive lineman Dominique Perry is returning from injury this week. Perry missed the opening three games due to an undisclosed ailment.  ...
CINCINNATI, OH・9 HOURS AGO
All Bearcats

The aerial assault overwhelmed IU in the first half at Nippert Stadium.
BLOOMINGTON, IN・5 HOURS AGO

The wide receiver had glowing thoughts for the media surrounding New York's rookie cornerback.
CINCINNATI, OH・2 DAYS AGO
All Bearcats

Alex Frank and I got into plenty of topics on the mid-week episode of Locked On Bearcats.
CINCINNATI, OH・2 DAYS AGO
All Bearcats

The two sides played an exciting game at the Hoosier's house last season.
BLOOMINGTON, IN・2 DAYS AGO