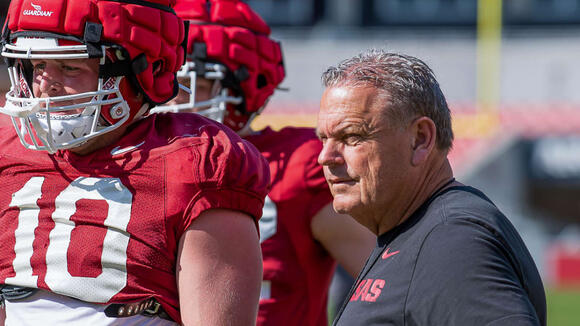 How KJ Jefferson uses it for motivation and a whole lot more at press conference.

FAYETTEVILLE, Ark. — It sure seems Arkansas coach Sam Pittman likes not having to be a front-runner.

It came again during his visit with the media Wednesday afternoon ahead of Friday's start to fall camp.

The question was about quarterback KJ Jefferson being left off many preseason league honors for teams.

"That’s Arkansas," Pittman said. That’s just what it is, which is fine."

He's not really surprised the junior quarterback might be using that as a little extra incentive in a season where hopes are high with the fans, but he was left off the preseason all-SEC team at media days a couple of weeks ago.

"Everybody has their own way of getting motivated," Pittman said. "He uses that stuff a little bit. You’ll have to ask him, but I would assume he uses some of that in some of his motivation and his preparation."

Pittman did try to say they don't go looking for the negative stuff.

"We don’t always need somebody to talk bad about us to motivate us," Pittman said. "A lot of times when that happens, there is some type of ‘well I’ll show you’ type of thing.

"KJ’s got a little bit of that in him along with he wants to be good no matter what people say.

Then he tried to explain it from another angle because coaches don't particularly like dealing with hypothetical situations.

"I guess I’d look on it the other way if they talked about how great he was all the time," Pittman said. "I don’t think he’d be less of a player."

Make no mistake, though. Pittman hasn't had to coach the Hogs when a lot was expected. It's usually low expectations that has historically produced the best results.

"We kind of thrive on that kind of stuff," he said about the low expectations. "That’s kind of who we are, and we like it that way."

Players will report for fall camp Thursday and practices will start Friday afternoon.

HOGS' NICK SMITH PICKS UP PLAYER OF THE YEAR HONOR

WHO WILL HOGS OPEN WITH IN MAUI AND WHEN?

LOOKING BACK AT LIFE OF ARKANSAS RADIO LEGEND PAUL EELLS

After Sideline Pouting Late in Loss to Bama, Is Malik Hornsby Gone?

Hogs Sam Pittman says later Cade Fortin No. 2 decision already "made for a while."
FAYETTEVILLE, AR・16 HOURS AGO
All Hogs

Will the Lane Train leave for the Station in Auburn, things worse for Vols, Hogs with Bama, Aggies hate this coach more than Saban, and much more
NFL・1 DAY AGO
All Hogs

Loser Saban Believed to Be Creature of Myth

While one has never been sighted in Arkansas, Sam Pittman hopeful he can document its existence this weekend
SPORTS・1 DAY AGO

What Alabama Reporters Have Written About Hogs This Week

Road Won't Get Easier Next Couple of Games for Unranked Hogs

Pittman Will Need to Figure Out What's Next Quickly

Adjusted goals necessary if coaching staff is to right ship after Alabama game
FAYETTEVILLE, AR・13 HOURS AGO
All Hogs

Nothing to be gained by trying to figure out what went on over six plays in the fourth quarter because ignorance is bliss
FAYETTEVILLE, AR・1 DAY AGO