This Guy Hired William Hung To Let His Co-Workers Know He Was Quitting, And This Is The Only Way People Should Quit Jobs From Now On 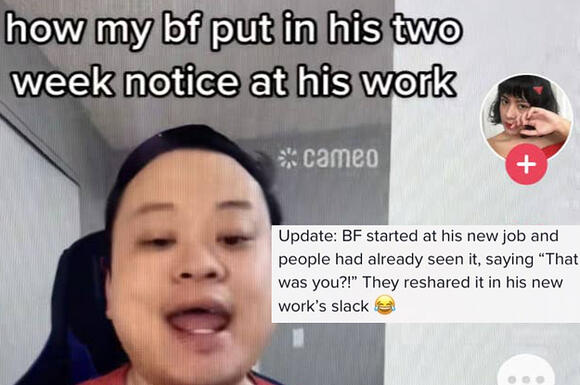 Quitting a job can be a bit of a tricky (and nerve-racking) thing. No matter how happy you are to be getting the heck outta there, you still want to leave your coworkers and higher-ups with a good impression. After all, you never know if you might end up working with them again, and it can't hurt to have a few good references.

Though the conventional advice is to play it safe when you're on your way out, recently a 33-year-old California man named Chris Gonzalez made a splash when he let his coworkers know he was quitting via a Cameo video from William Hung , whose American Idol audition performance of "She Bangs" basically took over the whole internet back in 2004.

Chris's girlfriend Joellen posted a video to TikTok , showing that Chris had shared the clip in his company's Slack, using @here to notify literally everyone who was online so they could see his message.

In the video , William says, "Hi, everyone, this is William Hung. Christopher is going to put in the notice to leave the current job for a new job in two weeks. He found a new job, but he'll miss all of you. You're all amazing, so don't give up creating the life you want." And then he treats us all to an inspirational original song .

In the comments, people are absolutely loving this idea, and the video has been viewed over 900,000 times on TikTok.

Joellen told BuzzFeed, "We were both working from home, and I was so excited to witness the reaction, knowing he dropped the '@here' (notifying everyone on Slack), and I decided to film the reactions and replies in real time."

And Chris's old coworkers absolutely loved this gesture. "Chris instantly started receiving direct Slack messages from his different coworkers congratulating him and saying it was an 'epic' way to go."

Not only that, but people at his new job have also seen the video. "A new coworker had speculated that the video he had previously seen on TikTok was the new 'Chris' at their office, and Chris confirmed," Joellen said. "When his new boss found out, she proudly shared her new team member's video in their work Slack, and people loved it. It was almost like a rite of passage."

And she revealed that the original song was a totally unexpected delight. "Chris never instructed or prompted William to sing — his original masterpiece was conceived all on his own. Chris absolutely loves his new job and is excited William Hung got to be a part of that moment."

As for William, he's been super busy since his American Idol audition catapulted him to fame. He has put out three albums, started a career as a motivational speaker, and has even given a TED Talk about turning failure into success.

While, in some more old-fashioned companies, a quitting video like this would fall into "Don't try this at home" territory, it's clear that Chris knew (and amused) his audience. And his coworkers will probably not forget about this for a long, long time.

Millennial Bosses, What's Something Your Older Managers Did To You That You've Sworn Never To Repeat?

I Found Someone Else's Hair In My Boyfriend's Underwear While Doing Laundry — WTF Should I Do?

"Neither of us have red hair."
LIFESTYLE・1 DAY AGO
BuzzFeed

"We Were Both So Embarrassed": 17 Hilarious Stories Of People Going To The Emergency Room For Very Unexpected Reasons

"Explaining my situation to the plethora of intake nurses of doctors was mortifying, and by the time the doctor saw me I was convinced I was actually dying of embarrassment."
ACCIDENTS・9 HOURS AGO
BuzzFeed

People Are Sharing Creepy Stories Of Things That Happened To Them, And They'll Send A Chill Up Your Spine

A few stories to get you in the Spooky Season mood.
WALMART・11 HOURS AGO

"It's Not Made To Be Good — It's Made To Be Cheap And Consistent": People Are Sharing Specific Things About "American Life" They Want Others To Know About

"I went to college with a guy from Germany, and this confused him quite a bit when he first got here."
SHOPPING・1 DAY AGO
BuzzFeed

This Woman Re-Creates Recipes People Have Left On Their Gravestones, And It’s Helping Others Find Comfort In Death

"I'm personally very afraid of my own mortality. I think the gravestone recipes kind of lend itself to talking about really hard topics in an easier way."
RECIPES・16 HOURS AGO
BuzzFeed

"I Don’t Need It To Be 'Elevated,' Thank You Very Much": People Are Sharing Foods That Have Become A Little Too Trendy (And Are All The Worse For It)

"Restaurants go so overboard with the extras now that it's almost impossible to find the normal version."
FOOD & DRINKS・2 DAYS AGO
BuzzFeed

People Are Sharing The Foods They Think Are Expensive And Overrated, And Some Very Popular Things Made The List

"It’s just too much umami to eat by itself, IMO. I’ve only had it a couple times and it’s just...SO aggressive."
FOOD & DRINKS・1 DAY AGO
BuzzFeed

If You Work As A Private Event Planner, Tell Me The Most Expensive Requests You've Gotten

Let's hear about the weird things rich people spend their money on.
ECONOMY・1 DAY AGO
BuzzFeed

Tell Us Why You Suspected Your Cheating Partner Was Having An Affair, And What Your Relationship Together Looks Like Now

The heart, at first, does not see what it does not want to.
RELATIONSHIP ADVICE・2 DAYS AGO
BuzzFeed

"This was something we took very seriously. We refused to sweep things under the rug. That is not who we are and is not what we stand for."
BEHIND VIRAL VIDEOS・2 DAYS AGO

The "I don't want a dog" to "I'm the dog's favorite person" pipeline is real.
THEATER & DANCE・2 DAYS AGO
BuzzFeed

"Great British Bake Off" Did A "Mexican Week" Episode, And Fans Are Frustrated With How It Was Handled

18 Tweets That Rightfully Went Viral This Week Because They're Hysterical

"What if they faked the queen’s death just so they could have the most shocking Masked Singer reveal ever?"
BEHIND VIRAL VIDEOS・2 DAYS AGO
BuzzFeed

Show Us The "Gayest" Picture From Your Childhood, Like One That Screams "Mom, The Signs Were Everywhere!!"

Dig through those photo albums and go through your Instagram grid because I want to see the cream of the crop.
SOCIETY・10 MINUTES AGO

Make a choice. You must!
FLORIDA STATE・2 DAYS AGO
BuzzFeed

"I was very, very uncomfortable and no one knew. I said nothing. And I paid the price for that."
CELEBRITIES・1 DAY AGO