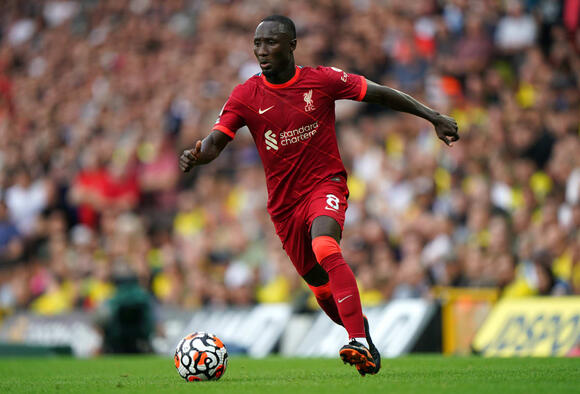 As per Fabrizio Romano, Liverpool could be set to award Guinean midfielder, Naby Keita with a new contract this summer. Naby Keita’s current contract is due to end at the conclusion of the 2022-23 season.

Midfielder Naby Keita has opened contract discussions with Liverpool as he enters into the last year of his current deal.

As per Fabrizio Romano , Liverpool could be set to award Guinean midfielder Naby Keita with a new contract this summer. Naby Keita’s current contract is due to end at the conclusion of the 2022-23 season.

Naby Keita joined Liverpool from German club RB Leipzig in 2018 for a fee of £54million, and has since made 117 appearances, scoring seven goals and racking up 11 assists in a Liverpool shirt.

Should he sign a new contract, he would become the fifth player at Liverpool to extend their contract this summer, joining James Milner, Mohamed Salah, Joe Gomez and Diogo Jota.

Naby Keita has struggled with injuries throughout his Liverpool career, with the midfielder totalling 16 spells of absence due to an injury or illness of some sort, according to TransferMarkt .

When he has played, however, he has shown why Klopp was keen and willing to pay big money for him. A silky player that has the ability to get the crowd onto their feet with impressive technical ability and withholding a goalscoring faculty, you can blame poor luck that he hasn’t been able to cement his place in Jurgen Klopp’s starting eleven due to his injuries.

With the Guinean captain currently earning £120,000 per week at Anfield, supporters were unsure whether the club would be willing to continue paying this sort of money for a player that can be a gamble as to whether he’s fit or not heading into each weekend.

Regardless, at 27-years-old, Naby Keita is entering what should be the prime of his career and being able to retain a player of his quality would be welcomed news for the club, staff, players, and supporters.

Liverpool were linked with Fiorentina's Sofyan Amrabat during and after the 2022 World Cup.
1 HOUR AGO
LFCTransferRoom

The French international was injured during the 2-1 defeat in the FA Cup against Brighton on Sunday.
47 MINUTES AGO
LFCTransferRoom

Watch Harvey Elliot's goal to give Liverpool the lead in the FA Cup against Brighton.
1 DAY AGO
LFCTransferRoom

Liverpool were knocked out of the FA Cup after losing to Brighton & Hove Albion on Sunday afternoon.
1 DAY AGO
LFCTransferRoom

Watch: Jurgen Klopp Confirms No Further Transfer Business This Window For Liverpool After Defeat At Brighton

Liverpool lost 2-1 to Brighton in the FA Cup fourth round on Sunday and Klopp has confirmed that nothing further will happen before the transfer window closes.
1 DAY AGO
LFCTransferRoom

Liverpool are still doing business in the lead to the transfer window closing on Tuesday.
16 HOURS AGO
LFCTransferRoom

All the key details as Liverpool face Brighton in an FA Cup fourth round clash on Sunday.
2 DAYS AGO
LFCTransferRoom

Key player expected to be sidelined for up to two months.
17 HOURS AGO
LFCTransferRoom

‘We Need to Look at Ourselves’ - Harvey Elliot on Liverpool's Season

Liverpool's campaign has went from bad to worse for Jurgen Klopp's side, out of both domestic cups and a top four challenge on their hands, youngster Harvey Elliot has given his verdict
14 HOURS AGO
LFCTransferRoom

Our predicted XI as Liverpool take on Brighton in the FA Cup fourth round on Sunday.
2 DAYS AGO
LFCTransferRoom

All the key details as Liverpool travel to the south coast to face Brighton in the FA Cup fourth round on Sunday.
2 DAYS AGO
LFCTransferRoom

"You're Going To See The Real Liverpool": Cody Gakpo Speaks Ahead Of FA Cup Clash

Liverpool’s new Dutch forward has spoken ahead of his side’s FA Cup fourth round match against Brighton & Hove Albion on Sunday.
2 DAYS AGO