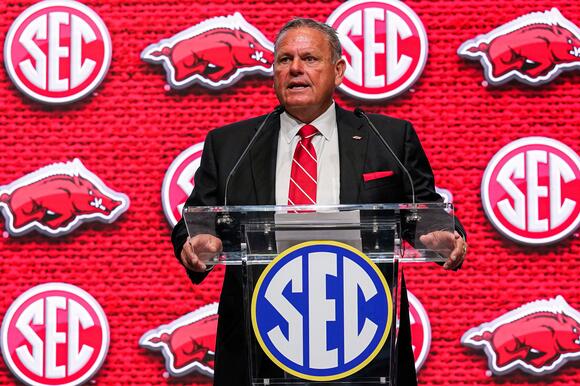 FAYETTEVILLE — Arkansas football players report for preseason practice on Thursday, and among them will be four new transfers from within the SEC. Coach Sam Pittman and the Razorbacks have used the transfer portal to address needs at wide receiver and along the defensive line.

In the days when players had to sit out for a season after moving between programs, transferring within a conference was rare. Now, programs like Arkansas are capitalizing on the opportunity to seek talent from rivals.

Pittman sees this as a natural progression of how the portal has come to work.

"Originally, I thought it was for kids that were over-recruited," Pittman said Wednesday. "In other words, they come to Arkansas, (but) they can't play here. It allowed them to be able to move without punishment somewhere else."

Now, Pittman said, players are moving for a variety of reasons: Dissatisfaction with playing time, opportunities for NIL money, and more.

"I think you have to transfer within the conference if you’re going to have the transfer rule," Pittman said. "Most of the time, the players that we’re looking for are in this league."

Arkansas did something of a player swap with LSU, losing defensive backs Joe Foucha and Greg Brooks Jr. to the Tigers but gaining defensive back Dwight McGlothern and defensive lineman Landon Jackson from Baton Rouge.

"We felt like some of our issues were rushing the passer as a defensive end and a man-to-man cover corner situation," Pittman said at SEC Media Days. "We felt like we did well with those two guys in the portal."

The Razorbacks also got defensive back Latavious Brini from Georgia and linebacker Drew Sanders from Alabama. Brini joins a secondary full of experienced talent, including star safety Jalen Catalon. Sanders is expected to join fifth-year senior Bumper Pool in the middle of the Arkansas defense and provide speed at linebacker.

Now that those intraconference transfers are on campus and Arkansas is set to begin preseason practice, Pittman made it clear he's not focused on any team but his.

Christina Long covers the Arkansas Razorbacks. You can email her at clong@swtimes.com or follow her on Twitter @christinalong00.