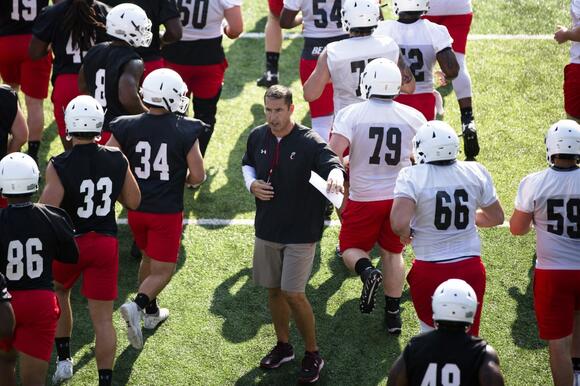 The Bearcats are back in action on the practice field.

CINCINNATI — UC head coach Luke Fickell spoke after the Bearcats' first practice of fall camp and confirmed the starting quarterback will get announced closer to kickoff in Arkansas.

Ben Bryant and Evan Prater will get a sense from the staff where they stand after the first few weeks of camp, but the media should buckle up for a wait.

"We'd like to have some things solidified in the first week-and-a-half," Fickell said to reporters after practice. "We'll probably never tell too much, but it's important to the team, to the progress that we can figure some things out."

He also quickly stamped out the idea of a QB platoon and the thought that it'll be easier on his time with the media if he gives the decision away earlier than the opening week of September.

"I'd like to give you some easy questions," Fickell joked . "I don't want to make your job all that difficult for you."

The back-and-forth continues in a classic yin and yang position battle. Experience going up against pedigree. Gunslinger battling a dual-threat. We'll get to watch it all play out at Camp Higher Ground in the coming weeks.

WSU Defense Will Focus on Jaydn Ott, So How Will Cal Adjust?

Bears must be creative in getting their prized freshman the ball, and QB Jack Plummer must provide a passing threat
PULLMAN, WA・27 MINUTES AGO
All Bearcats

The UC associate head coach is a key member of Wes Miller’s staff.
COLLEGE SPORTS・23 HOURS AGO
All Bearcats

The guard combo is part of a deep 2022-23 Bearcats roster.
COLLEGE SPORTS・22 HOURS AGO
All Bearcats

Assessing the key transfers on the Bearcats roster through the first four games.
COLLEGE SPORTS・9 HOURS AGO

Watch: Wes Miller on the Offseason Program, Year 2 at UC, and More

The Bearcats head coach met with the media as the season approaches in six weeks.
COLLEGE SPORTS・1 DAY AGO
All Bearcats

Alex Frank and I batted around plenty of topics on Thursdays Locked on Bearcats.
CINCINNATI, OH・4 HOURS AGO
All Bearcats

The team started up practice in the last few days.
BASKETBALL・1 DAY AGO
All Bearcats

The senior linebacker is balling out in red and black.
CINCINNATI, OH・1 DAY AGO

The senior had a stellar outing against Indiana.
COLLEGE SPORTS・2 DAYS AGO
All Bearcats

The Bearcats move to the Big 12 is quickly approaching as coaches recruit for a step-up in talent.
CINCINNATI, OH・1 DAY AGO
All Bearcats

Game Preview: Cincinnati Faces Tulsa on the Road for First Time Since 2016

The Bearcats may need to wake up the rushing attack to leave Oklahoma with a win.
CINCINNATI, OH・6 HOURS AGO
All Bearcats

The Bearcats haven't traveled to face the Golden Hurricane since 2016.
TULSA, OK・20 HOURS AGO