Learn How To Achieve Your Own Personal 'Everest' With Colin O'Brady 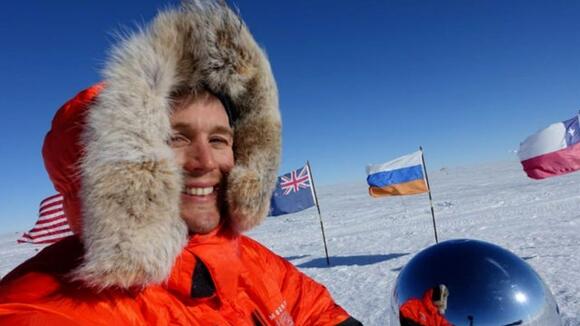 10-Time World Record holder, Colin O'Brady, stopped by 'Wake Up With Cheddar' to talk all about his new book 'The 12 Hour Walk' and how we can all push beyond our own limiting beliefs and achieve the impossible. Watch!

The Future of At-Home, On-Demand Fitness Space in Post-Pandemic World

Although many businesses find themselves thriving as Covid restrictions come to a close, stocks such as Peloton, once hailed as a "pandemic winner," are feeling the brunt. David Trainer, CEO of New Constructs, joined Cheddar News to discuss why Peloton might need to be bought or go bankrupt.
WORKOUTS・9 DAYS AGO
Cheddar News

Swedish startup Jetson, the flying electric vehicle producer, has raised $10 million in its latest funding round. Peter Ternström, co-founder and president of Jetson, joined Cheddar News to discuss making the skies available to the public with its personal transport drone.
BUSINESS・4 DAYS AGO
Cheddar News

Co-Founder of AOL Steve Case on New Book About Startups

Steve Case, co-founder of AOL and CEO of investment firm Revolution, joined Cheddar News to discuss his new book “The Rise of the Rest” and his perspective on startup firms across the country. "I think it's an optimistic view (of) the future of the American innovation economy if we can continue to level the playing field and back entrepreneurs everywhere," he said.
BOOKS & LITERATURE・6 DAYS AGO
Cheddar News

For the first time, adults under the age of 65 are recommended to be screened for anxiety. Cheddar News breaks down how anxiety has become such a cross-generational epidemic. Gene Beresin, MD, MA, executive director of the Clay Center for Young Healthy Minds at Massachusetts General Hospital and professor of psychiatry at Harvard Medical School and Dr. Lori Pbert, a member of the U.S. Preventative Services Task Force joined Cheddar News to discuss.
MENTAL HEALTH・3 DAYS AGO
Cheddar News

President Biden’s goal for half of all new vehicle sales in the U.S. to be electric vehicles by 2030 will mean updating charging stations to ensure the technology keeps up with demand. EVPassport CEO Hooman Shahidi joined Cheddar News to discuss.
CARS・12 MINUTES AGO
Cheddar News

The Week's Top Stories is a guided tour through the biggest market stories of the week, from winning stocks to brutal dips to the facts and forecasts generating buzz on Wall Street.
MARKETS・1 HOUR AGO
Cheddar News

Tracy Chou, founder & CEO of Block Party, joined Cheddar News to discuss how the company is joining up with Twitter to use its tools to combat cyberbullying.
INTERNET・56 MINUTES AGO

Nev Schulman, host and executive producer of ‘Catfish: The TV Show’ on MTV, discusses working with Zelle to help people avoid online scams, one of the telltale signs of an internet scammer, and why he doesn’t see romance catfishing coming to an end anytime soon.
TV & VIDEOS・4 DAYS AGO
Cheddar News

'Yeet' and Other Slang Words Added to Merriam-Webster Dictionary

The term "yeet," a noun defined as an expression of surprise approval or a verb meaning to throw something with force without regard for the thing, has been added to the Merrian-Webster dictionary along with a slew of other slang words. Other additions include “cringe”, “janky”, “sus”, “baller”, “lewk”, and “pwn”.
25 DAYS AGO
Cheddar News

Two boys from Maine who didn’t have enough money for country star Luke Combs' concert got to work stacking firewood and made enough to attend the show. The boys made a sign for the concert explaining their work and that it was one of the boy's birthday. What Combs did next after reading the sign made this fan’s 12th birthday the best ever.
MAINE STATE・27 DAYS AGO

Alex Pettyfer on Working with Guy Pearce in 'The Infernal Machine'

Actor Alex Pettyfer joined Cheddar News to discuss “The Infernal Machine,” a psychological thriller, in which he stars alongside Guy Pearce. “You do all this preparation and you feel you're like indulging in some sort of kind of craft that you feel very pretentious about, and then you sit down in front of Guy Pearce and it all completely evaporates because he's the most down to earth normal guy," he said.
CELEBRITIES・8 DAYS AGO
Cheddar News

In Iceland, people are throwing baby puffins from cliffs but there is a reason. The little ones can't take flight on their own, being that their eggs are hatched at the top of cliffs. Cheddar News breaks down the annual ritual of puffling patrol of Iceland that since has gone viral.
ANIMALS・8 DAYS AGO
Cheddar News

Bringing the latest from the business world for September 29, 2022.
ECONOMY・8 DAYS AGO
Cheddar News

X-ray CT technology developer, Lumafield, recently raised $35 million in a Series B round led by Spark Capital. Lumafield says it has developed the the world's first accessible x-ray CT scanner for engineers. The startup says the scanners and its cloud-based software can help companies solve tough engineering challenges at every stage of the product development process. Scott Johnston, co-founder and head of engineering at Lumafield, joins Cheddar News' Closing Bell to discuss.
BUSINESS・25 DAYS AGO
Cheddar News

All three major indexes posted the worst percentage drop since June 2020. Chad Oviatt, director of investment management at Huntington National Bank, joined Cheddar News to discuss the stock market plunge on the heels of the inflation data. “This is one of those market environments where the range of potential outcomes for next year is so broad that your best defense is just staying balanced,” he said.
STOCKS・24 DAYS AGO
Cheddar News

Here's what's trending from across the internet today! You've heard of jellyfish haircuts, but today its pineapple hairstyles and Halle Bailey in a sneak peak for the live action remake of 'The Little Mermaid'.
BEAUTY & FASHION・24 DAYS AGO
Cheddar News

Thousands of railroad workers could strike before the end of this week, causing a potentially massive disruption to the U.S. supply chain. Last week, two of the country's largest rail unions failed to agree on a new contract with rail carriers, after asking for more quality of life provisions covering attendance policies, as well as vacation and sick days. Negotiations between railroads and unions were expected to continue today. Unions have until a minute after midnight on Friday to reach tentative deals, or workers will strike. Suketu Gandhi, partner at Kearney, joins Cheddar News' Closing Bell to discuss.
TRAFFIC・24 DAYS AGO