Can Josh Heupel do for Tennessee Vols offense what Gen. Neyland did for defense? | Adams 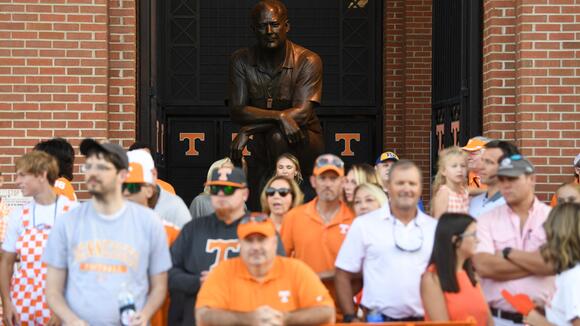 Offense seemingly was what Tennessee had in mind during most of its recent coaching searches.

Former coach Jeremy Pruitt was the exception, a defensive coordinator on national championship teams at Alabama and Florida State who had never been a head coach.

And he won’t likely be one again after posting a losing record in three seasons at Tennessee from 2018 through 2020. His inability to build a competent offense figured prominently in his downfall. But his teams didn’t exactly play shutdown defense, either.

The Vols finally found the offensive coach they were seeking when athletics director Danny White hired Josh Heupel from UCF in 2021. He succeeded where so many of Tennessee's previous coaches failed in their first season. He succeeded with offense.

Aside from Pruitt, Heupel followed a long line of offensive-minded coaches.

ADAMS:How could Phillip Fulmer not have noticed Tennessee Vols were cheating? Here's how

ADAMS:You might call Casey Pruitt a cheater. I call her a coach's perfect wife

Hall of fame coach Phillip Fulmer (1992-2008) was an offensive line coach and offensive coordinator before he was named to replace Johnny Majors. Fulmer was replaced by Lane Kiffin, who was renowned for his offensive expertise.

After Kiffin left for Southern Cal in 2010, he was followed by Derek Dooley, who also had an offensive background. So did Butch Jones, who was hired in 2013 after Dooley posted three consecutive losing seasons.

Despite Tennessee’s infatuation with offense, its greatest success has been achieved through defense. General Robert Neyland established himself as one of college football’s greatest coaches by going 173-31-12 in a career that was twice interrupted by military service.

He coached in four decades – from the 1920s into the 1950s – with success in every one. In two different seasons, opponents scored fewer than 17 points in 10 games. Of course, defenses were ahead of the offense in those days.

The Vols have had their share of good offensive coaches since Neyland.

Doug Dickey (1964-69) had the unenviable task of transitioning the Vols from the single wing they had run for decades to a more modern offense. In his second season, he led the Vols to an 8-1-2 record. In 1969, Tennessee went 9-2 and scored 328 points – the most by any UT team in 19 years.

Those 328 points underscored the offensive improvement under Dickey. That more than quadrupled the 80 points UT scored in 1964.

The Vols scored 484 points in 1993, Fulmer’s first full season. Much of the credit for that offense went to coordinator David Cutcliffe.

With Cutcliffe calling the offensive shots from 1995 through 1998, UT never scored fewer than 428 points.

As effective as Cutcliffe was, you couldn’t ignore the talent level in evaluating the offense. The Vols had future first-round NFL draft picks Heath Shuler and Peyton Manning at quarterback in the 1990s. They also had big-time running backs like Charlie Garner, Jamal Lewis and Travis Henry. From 1991 through 2000, they had 10 running backs drafted.

Heupel didn’t have that caliber of talent last season. He also had to introduce the Vols to a new offense, best known for its high-speed tempo. Despite minimal talent and a challenging transition, Tennessee averaged a school-record 39.3 points.

So what if that’s just one season. It could be a sign of things to come under Heupel, who will return eight starters from his first Tennessee offense.

No one would argue that Neyland was UT’s greatest defensive coach.

But if Heupel’s second season matches his first, he could be on his way to becoming Tennessee’s greatest offensive coach.

John Adams is a senior columnist. He may be reached at 865-342-6284 or john.adams@knoxnews.com. Follow him at: twitter.com/johnadamskns.