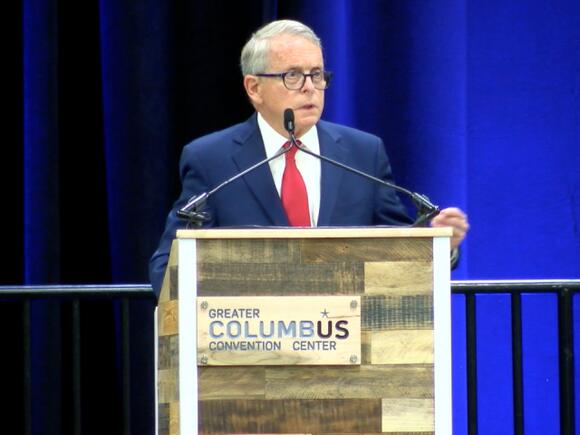 Gov. Mike DeWine announced millions in state funding for school safety, while also addressing a controversial bill that would allow educators to carry guns in schools.

A total of 1,183 K-12 schools across Ohio can apply for money to pay for security upgrades.

Schools will be able to apply for up to $50,000 to cover security items like cameras, automatic door locks and visitor badging systems. The application should be coming out within the next two weeks.

The thousands come from the nearly $47 million from the Ohio K-12 School Safety Grant Program. This program started in 2021 with $5 million from the 133rd General Assembly but has since increased this year by an additional $100 million with support from the American Rescue Plan Act.

"Helping schools pay for important security improvements is just one component of our comprehensive school safety approach that also supports the mental wellbeing of our kids and the work of local law enforcement to prevent crime."

But all eyes were focused on House Bill 99.

"This has gotten a lot of attention and let me just say that, in my opinion, there's an awful lot of other things that are important in regard to school safety besides what this bill provides," DeWine said. "And what the bill talks about, or at least what's got the most attention in this bill, of course, is the option that schools have toarm teachers."

Sub H.B. 99 would give a school board the option to allow any adult in a school to carry a firearm with an ambiguous amount of training. The decision to do this has led to dozens of national and international headlines, especially due to its proximity to the Uvalde mass shooting.

Although the governor is asking everyone to complete 24 hours of training, he says he doesn't know how much of that training will be holding a live firearm versus instruction. The curriculum is being drafted. At this point, a number of details have not been decided on.

DeWine himself said he would rather not have had it come to this.

"My preference would be for a police officer, a school safety officer," the governor said in a press conference after signing the bill, regarding his thoughts on guns in schools while he was attorney general. "That was my personal opinion that I expressed at that time and I still follow that."

Despite the money being funneled into this program, the majority of Northeast Ohio schools say this proposal isn't for them

In a statement to News 5, Solon City School District said, in part: “Our school campus and buildings are gun-free zones…We do not foresee a change in that policy.”

All different types of schools across the state are choosing not to, including in cities, suburbs and more rural areas. Some haven't decided yet.

"At this time, the district and the Board of Education are simply monitoring developments in relation to House Bill 99 and seeing what the implications are for the school district," Superintendent of Chardon Schools, Michael Hanlon said. "We've made no decision relative to that at this point."

From News 5 records, only a few schools across the state have decided or are leaning towards arming staff, including Newcomerstown Exempted Village Schools in Tuscarawas County.

She will be in charge of developing and providing training for school staff members whose districts opt to allow certain employees to be armed on school grounds.

At least four of the 24 hours have to be training of "scenario-based" or simulated training exercises, but it is unclear if that needs to be with a live weapon. Although it is not specified how much time is needed, there is a requirement to complete "tactical live firearms training."

When pulling DeWine aside after his announcement at the summit, his team answered that it would "definitely" be more than two minutes.

The two minutes comment comes from News 5 stating that, technically, since the bill doesn't state the length of time someone has to practice with a live firearm, it could be anywhere from two minutes to four hours.

"The 24-hours, there will be a heavy influence on how that individual handles the gun,"an official said. "And there are people who are not going to pass that."

Not passing a test isn't completely rare in Ohio.

In 2021, 38 schools out of the 5,600 did not complete their annual emergency management test, News 5 Investigators found.

EMTs are designed to test a school’s “response” procedures as outlined in the Emergency Operations Plan.

In a statement, a state spokesman wrote, "It's our understanding that the delay was likely due to the pandemic. The OSSC works with schools to try to get compliance even if they are delayed to ensure the schools are prepared for emergencies."

The state has not released the names or locations of the schools that failed to complete the testing, citing an exemption that allows agencies to withhold information that's deemed "security records."

H.B. 99 has an annual requalification training, but it can't be more than eight hours. That being said, the bill does not prohibit a school district from requiring additional training — it just can't be mandated by the state.

Another question to DeWine was about Sen. Frank Hoagland's gun training business. Back in June, News 5 discovered the Republican from Mingo Junction, who wrote the bill, could financially benefit from it.

The senator owns a business called S.T.A.R.T., which represents Special Tactics and Rescue Training. It is a firearm training and threat management business that specializes in school safety training.

When asked if Hoagland's business could benefit, DeWine and his team weren't sure. The local school districts would make those decisions at the local level, the state would just be approving them, they said.

When News 5 stated that this was a question about ethics, the governor and his team nodded and another state official chuckled.

The Ohio Supreme Court sprung into the national spotlight during the now-going-on-one-year redistricting battle. But the court is much more than just that.
OHIO STATE・3 HOURS AGO
News 5 Cleveland WEWS

One local organization has a plan to stop the violence in Northeast Ohio. But they tell News 5 it will take a collective effort to spark real change.
CLEVELAND, OH・1 DAY AGO
News 5 Cleveland WEWS

Disabled veterans in Ohio would get tax break under proposed bill

A proposed bill in the Ohio House would exempt disabled veterans and their surviving spouses from needing to pay property taxes.
OHIO STATE・3 DAYS AGO

Lakewood is one of 60 schools across the country offering a new AP African American Studies class, district officials said currently they are on the only district in Ohio offering it.
LAKEWOOD, OH・3 DAYS AGO
News 5 Cleveland WEWS

Members of Ohio Task Force 1 traveled to southwest Florida to respond and assist efforts after Hurricane Ian tore through the state earlier this week, according to a news release from FEMA.
OHIO STATE・4 DAYS AGO

She Builds is empowering underserved women with important life skills

A collaboration between Rebuilding Together and community members, She Builds gives volunteers the ability to bring their experiences to each project to renovate community spaces and homes.
CLEVELAND, OH・1 DAY AGO
News 5 Cleveland WEWS

How to get a free book monthly

In Geauga County, their community is struggling to gain access to high-speed internet. But, there is hope for those living in these rural areas.
GEAUGA COUNTY, OH・3 DAYS AGO

An appellate judge ordered Wednesday that the government must unfreeze the millions of dollars in bank accounts of Sam Randazzo.
OHIO STATE・4 DAYS AGO
News 5 Cleveland WEWS

A Frost Advisory will be in effect for multiple Northeast Ohio counties starting early Tuesday morning due to low temperatures in the mid-30s.
HOLMES COUNTY, OH・5 HOURS AGO
News 5 Cleveland WEWS

Frost advisory issued for almost all of Northeast Ohio

A frost advisory has been issued from 3 a.m. to 9 a.m. Monday for multiple counties in Northeast Ohio, according to the National Weather Service.
SUMMIT COUNTY, OH・1 DAY AGO

One of the big questions that has surfaced is why J.R. Majewski was told he could not reenlist in the Air Force after his initial four years were up.
OHIO STATE・5 DAYS AGO