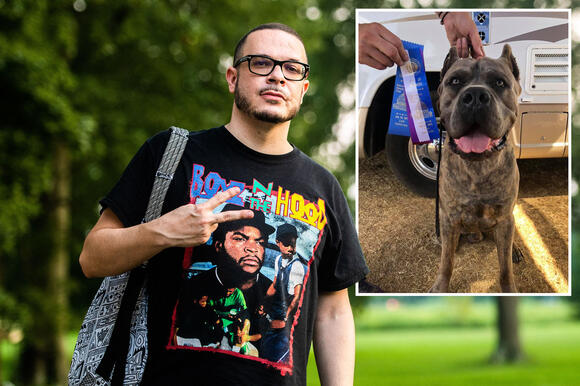 Controversial activist Shaun King tried Tuesday to justify his reported $40,000 purchase of a hulking guard dog as protection from “white supremacists” — but failed to explain why his progressive political action committee picked up the tab.

In a rambling Instagram post , King also railed against strict gun-control laws in New York and New Jersey, insisting they kept him from arming himself to protect his wife and kids from death threats purportedly made by “police, military snipers and white supremacist groups.”

“I have to say some things that I’ve worked hard to keep private for the safety and security of my family,” he began his statement.

“But I need you to know this so that you understand why our family not only needs a guard dog at home, but 24/7 security wherever we go.”

“Before you talk about how I should defend myself with guns, New York City won’t even allow me to have a gun. New Jersey doesn’t have stand your ground laws and hardly allows you to even own guns,” he wrote.

King’s comments came after the Washington Free Beacon reported Monday that his Grassroots Law PAC — which seeks to “end oppressive policing, incarceration and injustice” — apparently made a pair of payments totaling $40,650 to Potrero Performance Dogs for a mastiff named “Marz.”

The California-based company specializes in breeding Cane Corsos, a type of mastiff that the American Kennel Club describes as “intimidating creatures” which stand nearly 28 inches at the shoulder and often weigh more than 100 pounds each.

But King apparently returned the powerful pooch because “he’s got a little too much energy to be a family dog,” Potrero reportedly posted on Instagram.

In his statement Tuesday, King insisted he spends “more time each day now thinking about how to keep my family safe than I do doing the actually [sic] work I’m called to do.”

“So know this, when you see reports about the money it costs to keep me and my family safe, it’s nowhere near enough. Not at all. Not even close.⁣”

Monday’s report marked the latest in a series of allegations about the way King, who made a name for himself through the Black Lives Matter movement, has spent money generated through various fundraising efforts.

His critics include the mother of 12-year-old police shooting victim Tamar Rice, who accused him of soliciting donations by using her son’s name without permission.

Rice also called King — who appears to have recently moved out of a lavish, lakefront home in New Jersey — “a selfish self-centered person” and warned that “God will deal with you.”

In 2019, a “team of experts” claimed to have reviewed more than $34.5 million that King raised since the start of the Black Lives Matter Movement and said it found “absolutely no evidence that Shaun has ever inappropriately accessed any funds.”

Kenosha shooter Kyle Rittenhouse launched an online fundraiser to fight a civil lawsuit, but the GiveSendGo page isn't getting much support. The post Kyle Rittenhouse’s Online Fundraiser Is Floundering With Few Donations appeared first on NewsOne.
CHARITIES・3 DAYS AGO