RavenCountry is a FanNation channel covering the Baltimore Ravens 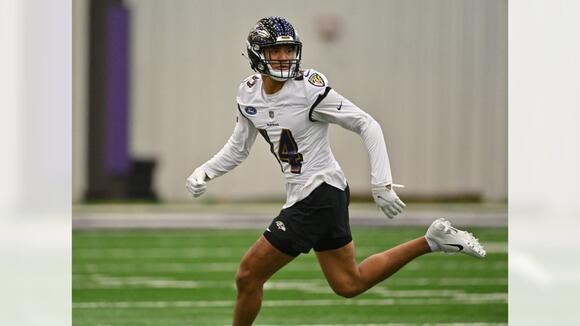 Ravens rookie Kyle Hamilton took criticism over the weekend after getting beaten by free agent. However, the safety bounced back with an impressive practice.

Hamilton shook off the criticism, but John Harbaugh didn't like the response on social media.

The Ravens still have complete faith in the rookie first-round pick.

“Someone gave the opinion that he’s a limited guy who’s got to play in the box because they saw him try to cover a guy who ran like a 10.4-[second] 100 meters,” Harbaugh said. “We’re not going to match him up against a 10.4 100-meter guy, but he played man [coverage] today pretty good, as you saw.”

Following the stadium practice, Hamilton shined when the team wore pads for the first time.

He had a couple of physical matchups with tight end Isaiah Likely. Hamilton also jumped a route and broke up a pass from Lamar Jackson to Mark Andrews.

The Ravens like Hamilton's versatility and will utilize those skills.

New defensive coordinator Mike Macdonald is going to move Hamilton around, putting him in the box, matching him up with opposing tight ends, and playing center field.

"We don’t have to feed him to the fire, per se," Macdonald said. "But the thing with Kyle is I don’t think he left off from where he was in the spring. Sometimes that happens with rookies; they take a little dip and need to get caught back up. I keep saying the word trajectory, but he just keeps learning, keeps communicating.

"He’s a very sharp, [a] very smart player, obviously plays fast. He can cover a ton of ground. So, like you said, we have great players back there, too. So, he has to earn his way onto the field.”

The Ravens faltered in the second half against the Buffalo Bills in a 23-20 loss in Week 4. Here's the Report Card.
BALTIMORE, MD・1 HOUR AGO
RavenCountry

'Emotions Run High' for Ravens in Deflating Loss to Bills

Ravens cornerback Marcus Peters had to be restrained on the sideline in the final minutes of the loss to the Buffalo Bills following another controversial 4th-and-goal decision. Tight end Mark Andrews was visibly agitated when he met with the media after the game.
BALTIMORE, MD・3 HOURS AGO
RavenCountry

It's raining in Baltimore for the Ravens and Bills Week 4 matchup ... Baltimore makes some moves for depth ... MVP candidates square off ... again.
BALTIMORE, MD・1 DAY AGO
RavenCountry

Ravens Notebook: Ronnie Stanley Gets Day Off, Questionable to Play Vs. Bills

Ravens left tackle Ronnie Stanley did not practice Friday and was listed as questionable for the Week 4 game against the Buffalo Bills.
BALTIMORE, MD・2 DAYS AGO

RavenCountry is a FanNation channel covering the Baltimore Ravens