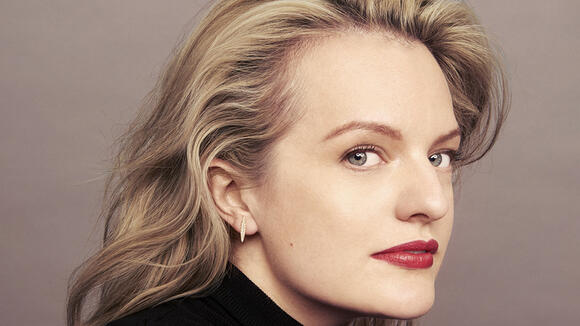 FX has ordered a limited series exclusively for Hulu from Steven Knight with Elisabeth Moss set to star, Variety has learned.

Titled “The Veil,” the show is described as a thriller that explores the surprising and fraught relationship between two women who play a deadly game of truth and lies on the road from Istanbul to Paris and London. One woman has a secret, the other a mission to reveal it before thousands of lives are lost.

“We’re excited to continue our partnership with Steven Knight on ‘The Veil’ and thrilled to have Elisabeth Moss sign on for the lead role,” said Nick Grad, president of original programming at FX. “Steven’s scripts are riveting and no doubt will showcase Elisabeth’s exceptional talent.”

“I’m absolutely thrilled to be telling this story, which is truly international and very contemporary,” said Knight. “We have gathered together some of the most talented people in the business. Working with Denise Di Novi is always a pleasure and I’ve wanted to work with Elisabeth Moss for a long time. Of course, FX and I are old friends. I think this will be a landmark television event.”

This will mark Knight’s fourth project with FX to date. He previously worked with the network on “Taboo” starring Tom Hardy and “A Christmas Carol” starring Guy Pearce. He also has an adaptation of “Great Expectations” on the way at FX with Olivia Colman attached to play Miss Havisham. Knight is also known for creating the popular series “Peaky Blinders” as well as the Apple series “See.” It was recently announced that he is working on a series about Enzo Ferrari for Apple.

Knight is repped by CAA and United Agents.

Moss currently stars in the hit Hulu series “The Handmaid’s Tale,” which will debut its fifth season in September. Moss won the Emmy Award for best actress in a drama series for her work on the show in 2017 and a Golden Globe in 2018. She is also known for her role as Peggy Olson in the AMC series “Mad Men,” which earned her six Emmy nominations. Her recent credits include the Apple series “Shining Girls” and the Universal feature “The Invisible Man.”

She is repped by WME, Ocean Avenue, Ribisi Entertainment, Independent Talent Group in the UK, and Hansen Jacobson. Tassler and Di Novi are repped by Ziffren Brittenham.

More from Variety Best of Variety

Birds will fly, fish will swim and Emily will be in Paris. Darren Star’s Emmy-nominated escapist romantic comedy “Emily in Paris” will launch its third season on Netflix on Dec. 21. The streamer announced the date and revealed a teaser for the upcoming season on Saturday morning during its Tudum virtual fan event. The new footage shows Emily (Lily Collins) as she finds herself at a crossroads in every aspect of her life, deciding the pathway she will choose regarding her work and love life. Emily will have to figure out exactly where her loyalties lie and what those decisions mean for...
TV SERIES・1 DAY AGO
Variety

A new trailer for the second season of futuristic fantasy actioner Alice in Borderland was the highlight of a slate of Japanese film, series and cartoons unveiled by Netflix on Sunday as part of its Tudum fan experience. Japanese content is doing well for the streamer, both within the country which is Netflix’s most valuable in the Asia-Pacific region, and increasingly overseas. Though the country is awaiting its “Squid Game” breakout show, the company has signaled that it is investing more in the Japanese-language category. The Sunday presentation included a group interview segment in which Yamazaki Kento and Tsuchiya Tao, who play...
COMICS・1 DAY AGO

"The Calling," a new show from David E. Kelley based on Dror Mishani's detective book series, is coming to Peacock.
TV SERIES・18 MINUTES AGO
Variety

Alan Rickman’s Journals Reveal Why the ‘Harry Potter’ Actor Decided to Continue Playing Snape: ‘See It Through. It’s Your Story.’

Excerpts from Alan Rickman’s diaries published by The Guardian offer a glimpse into the late actor’s decade-long journey through the “Harry Potter” franchise, with insight into why he decided to continue playing the role of Severus Snape across all eight films. Prior to production beginning on the series’ fifth entry “Harry Potter and the Order of the Phoenix,” Rickman was forced to confront health issues. The actor was diagnosed with an aggressive form of prostate cancer in 2005 and began to receive treatment. Doctors later decided to remove his entire prostate, with surgery occurring at the Vanderbilt University Medical Center...
CELEBRITIES・22 HOURS AGO
Variety

Former President Bill Clinton believes that “democracy is fragile right now,” speaking candidly on Saturday at A+E Networks and the History Channel’s History Talks about the issues “tearing us apart.” “What’s more important? Our common humanity or differences?” he mused on stage. “And what works better to build the kind of future we all want? Does cooperation work better or is everything a zero-sum game?” He answered the rhetorical question by saying, “Life is not a zero-sum game. Football is a zero-sum game — I’ve already watched one game today. I hope it’s not true, but it may be true that saving...
POTUS・1 DAY AGO
Variety

When Cuban-Spanish actor Ana de Armas was asked to play Marilyn Monroe in Andrew Dominik’s Netflix feature “Blonde,” she spent months preparing and studying for the role. “It was very important to discover the real woman and bring all of those elements together,” she said Saturday at the San Sebastian Film Festival.
MOVIES・2 DAYS AGO

Illumination, the studio behind the “Despicable Me” franchise, has tapped Mike Moon to form a new label, Moonlight. The goal is to broaden the range of films that Illumination makes beyond the kid-friendly fare that’s been its stock in trade. Moon most recently served as the head of adult animation at Netflix, a post he stepped down from in July to “pursue other opportunities.” His exit came as the streamer, battered by a swooning stock price, was laying off animators and dialing back its ambitions in the space. In addition to his new role as president of Moonlight, the company...
MOVIES・2 DAYS AGO
Variety

Finnish helmer Tiina Lymi has found the cast for her upcoming period drama “Stormskerry Maja,” set in the 19th century. “Thin Blue Line” star Amanda Jansson will play the headstrong lead, with Linus Troedsson cast as Maja’s husband Janne. Jonna Järnefelt, Tobias Zilliacus, Amanda Kilpeläinen Arvidsson will also star, joined by Tony Doyle and Desmond Eastwood, who appeared in “Normal People.” The film will be shot in Swedish and English. Based on a series of novels written by Anni Blomqvist, “Stormskerry Maja” tells the story of Maja and her family as they move to a barren and remote island. Their everyday life...
MOVIES・2 DAYS AGO
Variety

When the NFL announced at midnight ET that Apple Music is the new sponsor of the Super Bowl Halftime Show, the Swift-iverse went into overdrive speculating that Taylor Swift will be the performer: The announcement was made at midnight, Taylor releases her new music at midnight (er, like 99% of all major artists in the streaming age) and her new album is called “Midnights.” With no disrespect to the Swifties, there are actually many more-tangible reasons why Swift seems a likely front-runner for the Super Bowl Halftime Show — which, with an estimated 103 million viewers this year, is the single...
NFL・2 DAYS AGO
Variety

Bruna Papandrea’s production company and Fifth Season, formerly known as Endeavor Content, have acquired the rights to “The Wakes,” Dianne Yarwood’s upcoming debut novel, Variety has learned exclusively. “The Wakes,” which will be published in 2023, is described as heartfelt, funny and uplifting story about two failing marriages, two strangers falling in love, two friends embarking on a catering business — and the funerals that connect them all. This is a book about living. After all, the thing about death is that it makes life important. Hachette will release “The Wakes” in Australia, while Orion Publishing imprint Phoenix Books will publish in...
TV SERIES・2 DAYS AGO

Julia Roberts broke the glass ceiling for A-list female movie stars when she commanded $20 million for 2000’s “Erin Brockovich.” Until then, no woman actor had been getting as much pay as male counterparts such as Tom Cruise or Tom Hanks, who ruled the ’90s box office alongside Roberts.
CELEBRITIES・1 DAY AGO
Variety

Rihanna has slyly affirmed that she will be performing at the Super Bowl LVII Halftime Show in Feb. 2023. Roc Nation also officially confirmed the singer’s participation through a statement released on Sunday. The singer shared a picture of an NFL-branded football on her Instagram. The post came amid reports that the singer was “in talks” to headline the next Halftime Show. The game, which typically draws one of the biggest single TV audiences of the year, is scheduled to be played at the State Farm Stadium in Glendale, Ariz. on Feb. 12. “Rihanna is a generational talent, a woman of humble...
GLENDALE, AZ・20 HOURS AGO
Variety

Another chapter in the “Cloverfield” universe is coming. “Wounds” director Babak Anvari has been tapped to helm the newest installment of the hit horror series. J.J. Abrams is producing from Bad Robot, along with Hannah Minghella and Jon Cohen. Bryan Burk, Matt Reeves and Drew Goddard will executive produce. Joe Barton, who penned the 2017 cult horror hit “The Ritual,” is set to write the script. This next installment is currently in development at Paramount Pictures and will be the fourth chapter in the experimental sci-fi series. The first film, 2008’s “Cloverfield,” was a found footage alien invasion movie that became a...
MOVIES・3 DAYS AGO
Variety

From ‘Walking Dead’ to Walk of Fame: Norman Reedus on Why He’s Not Ready to Say Goodbye to Daryl Dixon

Norman Reedus never dreamt of being a star — and he definitely never thought it’d be possible to have his name on a star the Hollywood Walk of Fame. The “Walking Dead” actor, who has been part of the massive AMC franchise for 12 years and will continue after the show ends with his own spinoff, has come a long way since being discovered the day he was fired from a motorcycle shop after getting into an argument with his boss. His attitude may have gotten him fired — but it also opened another door wide open. “A friend of mine said, ‘Hey,...
CELEBRITIES・2 DAYS AGO
Variety

Serena Williams Talks to Bradley Cooper About Retiring From Tennis: ‘I Just Needed to Stop’

Bradley Cooper flexed a new skill on Saturday as the actor-turned-director interviewed tennis legends Serena and Venus Williams for the A+E Networks and the History Channel’s History Talks in Washington D.C. At the top of the conversation, he addressed Serena’s recent announcement that she was retiring from tennis. She played her final match at the U.S. Open earlier this month in New York City. “I just needed to stop,” Serena recalled of her decision. “I always said I wanted to stop when I’m playing really good tennis and winning and beating good players. For me, it’s really about things I want to...
WASHINGTON, DC・1 DAY AGO
Variety

Internet personality Rickey Thompson has signed with WME for representation. The agency will represent Thompson in all areas, working to further develop Thompson’s businesses across brand partnerships, film, television and digital media. Thompson has amassed nearly 11 millions followers across Instagram, TikTok, YouTube and Twitter, as well as hosts his Spotify-exclusive podcast “We Said What We Said.” Known for his comedic monologues on social media, the multi-hyphenate rose to prominence on Vine, boasting 2.5 million followers before the app shut down in 2016. Thompson was featured on Variety’s Power of Young Hollywood impact list in 2020, a group that was...
CELEBRITIES・2 DAYS AGO
Variety