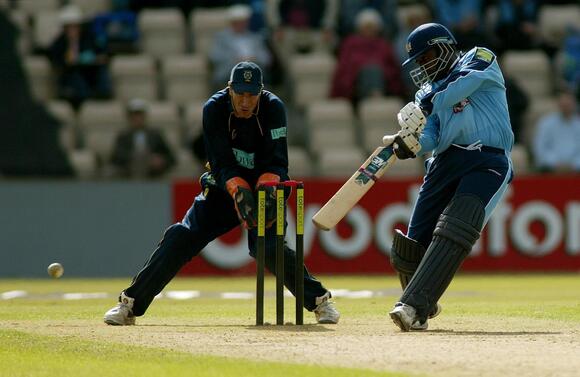 Welsh Fire finished bottom of the inaugural competition with only two wins but Kirsten, who won this year’s Indian Premier League with Gujarat Titans as batting coach, has reacted by changing the playing personnel and bringing in a serial winner.

Alleyne enjoyed a trophy-laden spell with Gloucestershire and helped them win nine one-day titles across seven seasons between 1999 and 2006.

This included victory in three successive Lord’s finals and he would love to be back at the Home of Cricket competing to win The Hundred on September 3.

He told the PA news agency: “It does put you in good stead being around winning groups, so that is important.

“Gary has his own pedigree too. He just won the IPL recently and he will be buzzing and ready to go.”

Welsh Fire open up this year’s Hundred on Wednesday with a clash at the Ageas Bowl against champions Southern Brave and are the representative of first-class clubs Glamorgan, Somerset and Gloucestershire.

Alleyne’s achievements are written into Gloucestershire’s folklore with the former England international joining the county in 1986 and becoming a mainstay as an all-rounder, wicketkeeper and finally captain before taking over as head coach in 2004.

He departed after three seasons of coaching having been an integral part of one of English cricket’s most successful one-day teams with two Benson & Hedges Super Cup triumphs complimented by four C&G Trophy – formerly known as the NatWest Trophy – successes and a solitary Sunday League victory during a 2000 campaign where they won the white-ball treble.

“Once it is happening you don’t maybe appreciate it as much but looking back retrospectively, it was a fantastic run and it hasn’t been matched properly since,” the 54-year-old reflected.

“In some ways the secret is there is no secret! It is just accepting and demanding every inch from the full squad and not kicking back or relying on certain people to win you a game.

“The best teams can accommodate everyone and make them feel special, even if their moment was only five or 10 minutes, or three balls, whatever it may take. I think that is how you get a really consistent level of performance from the whole group.”

Given Alleyne’s decorated playing career and strong start to life as a coach, winning the C&G Trophy in 2004 and leading Gloucestershire to their only Twenty20 final in 2007, a sense of bewilderment remains that he then spent more than a decade absent from the county game.

He is honest enough to concede it was partly down to his own decision to spend more time with his young family but did find plenty of doors shut despite a lengthy spell as head coach of the MCC.

The best teams can accommodate everyone and make them feel special, even if their moment was only five or 10 minutes, or three balls, whatever it may take

It was Gloucestershire and former team-mate Ian Harvey who gave him a route back in last year as one of their assistant coaches in a part-time capacity and he has toured the West Indies and Netherlands since with England’s white-ball teams.

Alleyne added: “It is really exciting for me to get back in.

“It wasn’t cricket’s fault entirely. Yes, I went to the MCC (in 2009) to improve and understand my general coaching philosophy really. I thought I would be there for three, maybe four years and then I would be ready to get back into first-class cricket. It was at that time I couldn’t find any opportunities.

“I then took my eye off the first-class ball a little bit but once my kids got to an age where I was happy with where they were at, I started to reengage and so far some options have been coming up.

“I have had some nice opportunities with England, with Gloucestershire and now with Welsh Fire. I feel as though the next four or five years will be quite exciting.”

After a prolonged absence, Alleyne wants to seize his moment and play a part in helping inspire a new generation of black coaches.

In an alternative world, Alleyne is the England white-ball head coach and Kirsten is in charge of the national Test set-up after both went for interviews this summer, but instead they are aiming to mastermind a Welsh Fire turnaround.

Going from bottom to Hundred winners in 12 months could help Alleyne fulfil a long-term ambition.

“I would love to see more black coaches out there,” he insisted. “I hope if anything, this will give everyone the encouragement to get fully qualified, put themselves out there and at least give them a chance of a role.

“I believe I have the skills and that is how I have always operated. I look at myself first and say can I do this job and impact the England team? When I can tell myself yes, of course I will put myself forward into a position to tackle it.

“I wouldn’t do anything for tokenism, I am not wired that way but at the moment I really feel like I can impact English cricket and I would love to do that with the national side.”

Harlequins’ miserable league run continued with their fourth straight Premiership defeat after a red card for captain Stephan Lewies ruined any chance of them ending that sequence against London Irish.Lewies was sent off for a dangerous challenge to the head of opposition No 8 Chandler Cunningham-South, and Irish took full advantage with a bonus-point victory to leave them just one point behind Quins in the Premiership table.Michael Dykes scored a hat-trick of tries, Cunningham-South, Tom Pearson and James Stokes the others with Paddy Jackson converting all six in a 42-24 victory.Quins’ response was a penalty try award and tries from...
11 HOURS AGO
The Independent

Chris Dobey claimed his first major PDC title by winning the Masters in Milton Keynes and hopes it will help him gatecrash the cast-list for the Premier League.The 32-year-old from Bedlington beat former world champion Rob Cross 11-7 in Sunday’s final, having also knocked out world number one Michael Smith in the semi-final.It represents the biggest title of Dobey’s career by far and he will now be hoping he has done enough to earn a place in the Premier League, which starts next Thursday.DOBEY HAS DONE IT! 🏆Chris Dobey is the 2023 Cazoo Masters champion!Hollywood makes history in Milton Keynes,...
5 HOURS AGO
The Independent

Nathan Jones is confident Southampton can go toe to toe with Newcastle in Tuesday’s Carabao Cup semi-final second leg despite the sides being worlds apart in the Premier League table.Basement dwellers Saints lost the opening leg 1-0 and were reduced to 10 men when Duje Caleta-Car was sent off in the 86th minute at St Mary’s last week.Jones knows Southampton face a formidable task in trying to score against Eddie Howe’s third-placed Magpies – who have conceded only 11 goals in 20 top-flight matches – but wondered if the south-coast club’s underdog status in the cup contest could work in...
6 HOURS AGO
The Independent

National League leaders Wrexham were denied another FA Cup giant-killing as 10-man Championship high-flyers Sheffield United snatched a stoppage-time equaliser in an absorbing 3-3 draw.The famous old Racecourse ground has witnessed its fair share of shocks – with a picture of Mickey Thomas’ famous free-kick goal against Arsenal in the FA Cup in 1992 hanging on the wall of the Turf Hotel adjoining the stadium – and this was almost one for a new era at the club.Watched by one half of their Hollywood ownership duo in Ryan Reynolds, Paul Mullin’s 27th goal of the season four minutes from time...
9 HOURS AGO
The Independent

Wrexham manager Phil Parkinson was “choked” they had not been able to hold off Championship high-fliers Sheffield United after his side were denied a famous victory by an added-time equaliser.Paul Mullin’s 27th goal of the season four minutes from time had put the National League leaders within sight of the FA Cup fifth round only for John Egan to make it 3-3 deep into seven minutes of additional time.Blades striker Oli McBurnie scored after just 64 seconds but goals from James Jones and Tom O’Connor early in the second half put the Welsh club on course for a second successive...
7 HOURS AGO
The Independent

Brighton boss Roberto De Zerbi insists the club must keep wantaway midfielder Moises Caicedo if they are to maintain their bid for a place in Europe.The sixth-placed Seagulls have two possible routes to the continent after they knocked out holders Liverpool to reach the fifth round of the FA Cup.De Zerbi has already seen attacker Leandro Trossard leave for Arsenal and Brighton have blocked the Gunners’ attempt to prise Caicedo away.The Ecuador midfielder missed the 2-1 win over Liverpool after publicly stating his desire to leave, but De Zerbi and Brighton are digging their heels in.“It’s already difficult for me...
11 HOURS AGO
The Independent

Rob Cross and Chris Dobey will contest the final of the Masters in Milton Keynes.Cross is eyeing a first major title since 2021 as he took out Peter Wright in a dramatic semi-final.The 2018 world champion, who ousted Michael van Gerwen in the quarter-final, won the deciding leg to seal an 11-10 victory.CROSS IS IN THE FINAL! ⚡️Rob Cross survives three match darts to take the deciding leg and set up a showdown with Chris Dobey in the final!Who will lift the trophy? 🏆Up next | THE FINAL 👉 Chris Dobey v Rob Cross📺 https://t.co/HqTxQleosO | SFs pic.twitter.com/zj9uILVP4X— PDC Darts...
6 HOURS AGO
The Independent

Liverpool became the latest high-profile club to exit the FA Cup as the defending champions conceded a goal in the second minute of stoppage time to lose 2-1 at Brighton in the fourth round on Sunday.Japan winger Kaoru Mitoma produced a brilliant piece of skill for the winner by feigning a shot to deceive two defenders and then driving a close-range finish into the roof of the net. It earned Brighton a come-from-behind win, which backed up a 3-0 thrashing of Liverpool in the Premier League two weeks ago.Liverpool came close to winning a quadruple of major trophies last season,...
12 HOURS AGO