THE BEE has served Inner Southeast Portland since 1906. 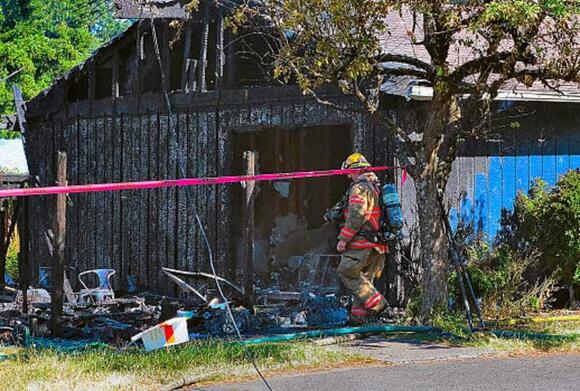 This was one of several residential fires in July; in this one, the occupant of the unit where it started lost everything

A fire that broke out in a small apartment complex in the Foster-Powell neighborhood on July 18 at about 4 p.m. sent Portland Fire & Rescue (PF&R) crews to 7716 S.E. Mitchell Street.

Woodstock Fire Station 25's Engine Company was the first to arrive at the narrow, hard-to-reach four-plex. As they arrived, the crew reported that an apartment was fully engulfed, with flames showing from doors and windows.

As the other nine PF&R units pulled in one after another, an emergency priority call went out to notifying all firefighters that the electric power line to the building had burned off the northwest corner, and was live, energized and sparking in the street.

"Firefighters found that the apartment on fire was threatening a connected structure," PF&R Public Information Officer Lt. Damon Simmons told THE BEE. "There was a search to ensure no one was trapped inside, while others worked to extinguish the fire."

The distraught resident of the apartment in which the fire started, standing outside the fire line, cried out, "My home has burned, it's all gone." She was among those receiving emergency housing assistance from the Red Cross.

"No humans were injured, and one dog escaped; but sadly, firefighters found a deceased cat in the fire," Simmons reported. "The fire was quickly extinguished, but the apartment of origin was a total loss," Simmons said. The cause of the fire is still under investigation.

It was not your ordinary rear-ender. The responsible vehicle caught fire -- and its driver ran awayIt was not your typical fender-bender, on Wednesday morning, September 7, eastbound on S.E. Tacoma Street at 13th Avenue — because, as a result, one of the cars caught fire. Central Precinct officers and Westmoreland Fire Station 20 responded at 9:46 that morning. "This was a two-vehicle, non-injury crash," later reported Portland Police spokesperson Sergeant Kevin Allen. "The preliminary investigation indicates that the driver of a Honda Civic rear-ended an Infiniti SUV. The Honda caught fire, but was extinguished by firefighters. "The Honda's driver...
PORTLAND, OR・2 DAYS AGO
The Bee

Dozens paint the 'Arleta Triangle' as its makeover continues

With the bypass sfreet blocked at 72nd and Woodstock, closing one side of the Arleta Triangle, painting has been doneAfter being an Inner Southeast Portland nexus of street shootings for quite some time, residents of the Mt. Scott-Arleta neighborhood say they're relieved that the gunfire incidents have considerably declined this year. One of the neighborhood volunteers' projects has been to close off the "Arleta Triangle", a complex intersection at S.E. Woodstock Boulevard and 72nd Avenue, which they have successfully accomplished. Their next step was to transfer the closed area there into a colorful street plaza, which took place...
PORTLAND, OR・2 DAYS AGO
The Bee

The annual cleanup found many volunteers pulling bags and bags of junk up out of Johnson Creek. VIDEO includedAfter being hindered by the COVID-19 pandemic for two years, the Johnson Creek Watershed Council (JCWC) Annual Creek Clean-up event was again a splashing success on Saturday morning, August 20, as you'll see in the video, below. "Splashing" — partly because only for a brief period in late summer are volunteers permitted to wade into the creek to remove the debris. After a brief meeting, a large contingent of volunteers made their way into Johnson Creek City Park to begin their...
MILWAUKIE, OR・2 DAYS AGO
The Bee

A photographic essay by BEE correspondent Rita Leonard finds her focusing on wildlife: Artistic, and abstractWild animals of all sorts inhabit the Brooklyn neighborhood — some in person, some in paintings, some in statues, and some in legend. Proximity to the Oaks Bottom Wildlife Refuge allows deer, coyotes, raccoons, opossums, skunks, and other wildlife easy access to the neighborhood. Anyone who has left out a dish of dry cat food on their porch has likely been visited by a possum or two, or a family of raccoons — which often spend their daylight hours asleep under neighborhood porches. A D...
PORTLAND, OR・2 DAYS AGO

Museum near OMSI gets a new historic steam engine

The museum already shelters and cares for three historic train engines owned by Portland; they'll be joined by one moreThe Oregon Rail Heritage Foundation's museum — the public rail museum just east of the Oregon Museum of Science and Industry — has acquired a 102-year-old steam engine owned by the Oregon Historical Society. ORHF hopes to use it for future train rides between its museum near OMSI and Oaks Amusement Park in Sellwood. The museum's President, Roy Hemmingway, announced at the beginning of September that the locomotive — named the "Mount Emily Shay" — will be transferred to the foundation's...
PORTLAND, OR・2 DAYS AGO
The Bee

Taxi driver's shooter arrested in Mt. Scott-Arleta; out on bail

A taxi driver came under fire and was wounded; he drove himself to the hospital. His attacker was arrested, but...The story received great media attention: A taxi driver for Radio Cab was shot while driving from N.E. Glisan Street at Interstate 205 at about 9 a.m. on Thursday, September 1st — and then he drove himself to a hospital. He even had the presence of mind to get the license number of the vehicle used by the shooter. That license number made the hunt for the attacker easy for East Precinct officers, and an arrest was soon made. But what...
PORTLAND, OR・2 DAYS AGO
The Bee

Thousands of 'Hood to Coast Relay' runners pass through Southeast

America's longest relay race starts and Mt. Hood and goes right through Southeast Portland en route to the coastThe 40th annual "Providence Hood to Coast Relay", known informally as the "Mother of All Relay Races", brought thousands of runners through Inner Southeast Portland all afternoon and late into the evening on Friday, August 26, on their 199-mile journey on foot to Seaside. Drawing participants from over 40 countries and all 50 states, a thousand teams of runners, with eight to twelve members each, took turns running — with their remaining teammates riding in vans or SUVs from one "transfer point"...
PORTLAND, OR・2 DAYS AGO
The Bee

A weekly summer feature of the Sellwood Community House in 2021 was skipped this year -- except for one dayThe weekly Sellwood Community House summer "Thursday Market" was canceled this year — due to the lingering COVID-19 pandemic, as well as to remodeling projects ongoing in the organization's building at S.E. 15th and Tacoma Street. But there was one exception this summer. On that day, the Community House hosted the lone Thursday Market of the year — presented as a "kickoff to Summerville", and in support of the Southeast Portland Ukranian community. It took place in front of their building,...
PORTLAND, OR・2 DAYS AGO

LETTERS to the Editor

The Letters to the Editor are where BEE readers each month report community news and their own opinionsAnother dangerous fire in Woodstock Editor, So this happened at 6 a.m. on Saturday, 9/10/22. Homeless campers right by my house set a mattress on fire. Luckily, my neighbor was up and was able to call the fire department before it spread to our house, or to other structures. This time. Cathy Miller Woodstock Celebrating the "older person" on October first Editor, For those of us lucky enough to have reached our sixth decade or beyond, the feeling of being...
PORTLAND, OR・2 DAYS AGO
The Bee

Police agencies join together to solve an attempted murder on 82nd Avenue, just south of Powell BoulevardOn September 8th, just after 9:30 p.m., East Precinct officers responded to a shooting in the 3300 block of S.E. 82nd Avenue of Roses, a bit south of Powell Boulevard. When officers arrived, they found an adult man suffering from multiple gunshot wounds. He was transported to an area hospital and did survive his injuries. Investigators were able to identify a juvenile, and 24 year-old Charlie Hernandez, as suspects in the attempted murder, and an arrest warrant was issued for the juvenile and Hernandez....
PORTLAND, OR・2 DAYS AGO
The Bee

Periodically the Multnomah County Master Gardeners open their Inner Southeast garden to the public (VIDEO)Volunteers from the Multnomah County Master Gardener (MCMG) Demonstration Garden looked ecstatic as they welcomed the public back to their first "Open Garden" in more than two years on Saturday, August 20. (We have a video, below.) During the four-hour midday event, some 125 visitors trekked to the Brentwood-Darlington neighborhood to roam the well-groomed garden. One of the dignitaries attending that day, OSU Community Horticulturist Weston Miller — who manages the Master Gardener organization — told visitors about the program. A D V E...
MULTNOMAH COUNTY, OR・2 DAYS AGO
The Bee

Armed robbery report on 82nd Avenue ends in 'stand down'

For a time there was quite a gathering of police at an 82nd Avenue motel -- but the outcome was inconclusiveAs drive-time traffic was starting to wind down, on Wednesday afternoon, September 7, a "Robbery — with Weapon" dispatch at 5:43 p.m., directed East Precinct officers and specialty unit members to the Del Rancho Motel at 7622 S.E. 82nd Avenue of Roses, in the Brentwood-Darlington neighborhood. Soon the northbound lanes of the thoroughfare were blocked, as 13 PPB units — including a K9 cruiser — assembled in the motel's driveway. Several officers had rifles; others appeared to be preparing...
PORTLAND, OR・5 DAYS AGO

Those in Portland with an Arab heritage have resumed sharing their music, food, and culture at Oaks Park. With VIDEO!The combination of its being the Sunday of Labor Day weekend, that the weather was lovely, and its location being nonprofit and historic Oaks Amusement Park, made for perfect conditions for the 11th annual "Arab Mahrajan" on September 4th. (We'll share a video, if you missed it.) "A 'Mahrajan' is a celebration — and what we're doing here is celebrating the culture and the diversity of Arab Americans here in our community," smiled Arab American Cultural Center of Oregon (AACCO) President...
PORTLAND, OR・2 DAYS AGO
The Bee

The 50th annual race presented by OHSU Health brings road closures, public transit detours and bridge impacts.With the Portland Marathon returning for its 50th year Sunday, Oct. 2, drivers and public transit riders should expect road closures and delays along the marathon's route through the city. The race begins at 7 a.m. and ends at 1:45 p.m., but traffic impacts may occur before and after that timeframe for setup and takedown operations. With thousands of race participants and spectators, parking downtown will be hard to find. Also, some bridges across the Willamette will see partial closures before the race begins...
PORTLAND, OR・3 DAYS AGO
The Bee

As PP&R starts to revive its summer programs, Woodstock scores a Pixar movie that never showed in theaters!Portland Parks' "Summer Free for All" events in city parks this year began starting up again after the pandemic break — but initially, only in small quantities. As pointed out in a previous BEE article, Sellwood's July Monday concerts in Sellwood Park returned — but only as one concert, this year, and it was in late August. Relatively few Movies in the Park have appeared around Southeast Portland this year, but notably one that did was in Woodstock Park over Labor Day weekend....
PORTLAND, OR・2 DAYS AGO
The Bee

Here are the notable nonprofit Events and Activities scheduled for Inner Southeast Portland in OctoberOCTOBER 2 Sellwood-Moreland Neighborhood PDX Marathon "After Party": Moreland Presbyterian Church will be holding a community neighborhood barbecue after the marathon — in their parking lot, on S.E. 19th Avenue just south of Bybee Boulevard, from 11:30 a.m. to 2:30 p.m. There will be live music, hot dogs, SnoCones, and a bake sale put on by the Youth Group. Stop by and say hello to your neighbors! OCTOBER 5 Learn more about the Portland Charter ballot proposal tonight: The featured speaker at this evening's SMILE General...
PORTLAND, OR・3 DAYS AGO

THE BEE has served Inner Southeast Portland since 1906.