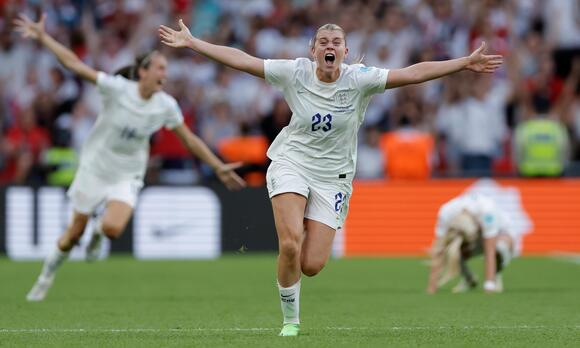 What a journey it has been. There have been many bumps along the way to this historic victory that has created a group of European Championship-winning England legends. The journey does not stop because England have won. Now we have everyone’s attention we need to keep it going.

I was overwhelmed by emotions after the final whistle. I did not anticipate that – it was unprecedented for me – but it shows how much it means to those who have been a part of England’s women’s football down the years.

I woke at 6am on the day of the match because I was so excited. I was anxious but hyped. I was working at Wembley, which helped keep me distracted because I was always talking to people. When you are a player you can influence things but watching on from the stands, when you are so invested and want them to do well, is horrible.

When Germany’s best player gets injured in the warmup and there is a first-minute goalmouth scramble but Mary Earps claims it, you think: “This is our time.” I never thought we were going to lose; I just did not want it to go to penalties because it’s 50-50 then. We were all so deflated when the equaliser went in but once we weathered the storm I felt really confident. I said before the game that England would win 2-1 in extra time. I probably should have said that louder.

I got there at 1pm and it was packed; Olympic Way was full of people, the atmosphere was so joyous. I got into the ground really early and I was quite high up, so I got to hear people’s reaction when they walked in. Quite a lot of this audience had not been to Wembley or a women’s game before. I sat back and listened to everyone coming in and saying: “Wow!” This tournament has had the wow factor; it has gripped the nation. It was a nice environment, safe and inclusive – everything that you want for a major event.

It is brilliant that we had a victory parade on Monday because that is not a given. It gives women’s sport visibility and legacy. Those players deserve that celebratory moment and it is great for them to see that. It is fantastic that people have come out but it is right they do. England have just won a European Championship and the team are legends and will continue to have that status for the rest of their lives. The Lionesses were absolutely astounding, the best team in the competition. They have gone from strength to strength. It is their time.

My good friend Jill Scott enjoyed herself, from the moment she came on to entertain the lip readers to being on stage in Trafalgar Square and beyond. We had a video call while she was at the victory party and everyone was, unsurprisingly, having a good time. She recognises big moments, knows when to celebrate and knows how to make everyone around her feel special and have a great time. She is a fantastic role model. I am so proud of them but most of all for Jill: she has bronze and silver but now she has gold, and no one deserves it more.

There was no shortage of sunglasses among the squad the morning after the night before. The adrenaline for the players means they do not usually go to bed until 4am after a game, so after winning a European Championship an all-nighter and getting some food on the way to the victory parade is the bare minimum. It is how it should be done by those who have made history.

Football needs to build on the momentum and capitalise on the opportunity. It starts over again. This tournament has provided packed stadiums and record-breaking television audiences but there is plenty of work to be done. It should be every girl’s right to play. Only 63% of schools offer girls the opportunity to play football in PE. We have to aim high from grassroots to international football; we need consistent attendances in the Women’s Super League and England games to keep the momentum going. The final was the hottest ticket around. It would have been easier for me to get a ticket to the final of the men’s European Championship last summer than Wembley on Sunday – that is the potential of the women’s game.

It will be exciting to see how the team go from here under Sarina Wiegman, especially with a World Cup less than 12 months away. She has done an incredible job in a relatively short space of time since taking over. Nothing negative has come out of the camp about her. You only usually hear the bad stuff but she has the respect of everyone. It seems as if the players adore her.

It is a credit to her that all the players knew what they were doing. There was never any stress or anxiety; they constantly played with calmness and belief. The attitude of a team reflects the leadership, and this England side are the mirror of their manager. Everyone has the ability to give instructions, to try to have a gameplan but the best coaches simplify it and make it look easy. She has done that. all the squad knew their roles and responsibilities, and it has all come together. That is what good leadership does.

I want to say a massive congratulations to this England squad and staff. They have inspired the nation and future generations. They deserve everything they receive. It has been a joy to witness.

Brighton’s Continental Cup campaign got of to the worst possible start with the WSL side slipping to a 3-2 defeat at Championship Birmingham in Group C. Libby Smith opened the scoring for the home side before Jade Pennock doubled the advantage eight minutes after half-time. Lee Geum-min pulled one back on the hour but Lucy Quinn was quick to restore the two-goal cushion and Danielle Carter’s 89th-minute penalty was too little, too late.
WORLD・5 HOURS AGO
The Guardian

“Once is happenstance,” wrote James Bond’s creator. “Twice is coincidence. Three times, it’s enemy action.” As European politicians and security agencies ponder the three explosions that caused leaks in the two Nord Stream gas pipelines under the Baltic Sea on Monday, they may find this adage of Ian Fleming’s helpful in resolving their doubts about who was responsible.
POLITICS・1 DAY AGO

The Florida governor passes the hat for disaster relief.
FLORIDA STATE・1 DAY AGO
The Guardian

‘The bleakest of worlds’: how Molly Russell fell into a vortex of despair on social media

In an extraordinarily candid and profane interview with Rolling Stone, Michael Fanone – the former Washington police officer who was seriously hurt at the US Capitol during the January 6 attack – called the Republican House leader, potentially the next speaker, a “fucking weasel bitch”. Fanone...
PUBLIC SAFETY・6 HOURS AGO

The new prime minister began September promising a ‘new era’ for Britain. One economic crisis later, she has delivered
U.K.・2 DAYS AGO
The Guardian

Eight-and-a-half years after Vladimir Putin announced the annexation of Crimea, he gathered the elites of Russia in the Kremlin’s St George Hall for another land-grab ceremony: this time laying claim to four more Ukrainian regions. The annexation formalities were preceded by an angry, rambling speech that dwelled only briefly...
POLITICS・2 DAYS AGO
The Guardian

Employees have grown to love the flexibility of remote working, and firms keen to keep their staff can do little about it, surveys find
ECONOMY・1 DAY AGO
The Guardian

You be the judge: should my husband stop removing the sink strainer?

Using the sink strainer is simple and could prevent a big plumbing hassle. I live with my husband, Simeon, in a house that has a sink strainer, which I think is quite useful. It helps with collecting any sort of food debris and, for me, it’s just an obvious thing to use. I’ve always had one in my home. But Simeon doesn’t feel that way.
LAW・2 DAYS AGO

God’s Creatures is a film on why rapists are protected. Its makers are asking why distributors won’t pick it up

Paul Mescal and Emily Watson on why they made a film about an Irish fishing village, and what it has to say about sex and control in America
PUBLIC SAFETY・2 DAYS AGO
The Guardian

Coolio, who has died suddenly aged 59, was an accessible star of the US west coast hip-hop scene whose 1995 single Gangsta’s Paradise became one of the most successful rap songs of all time, topping charts around the world. Although he had emerged in the late 1980s from the...
HIP HOP・2 DAYS AGO
The Guardian

Vladimir Putin’s 21 September mobilization order, which aims to deploy 300,000 reservists to Ukraine, and possibly as many as 1.2 million, is an act of desperation aimed at saving a faltering war that he now owns. But his military call-up is also a huge gamble. For 22 years Putin has solidified his rule through an implicit pact with the Russian people: don’t make political waves and you will live comfortably. His mobilization order has broken that pact, and many Russians are taking to the streets or running to the border to flee the country.
POLITICS・2 DAYS AGO
The Guardian

Denied the fairytale ending in 2016, Jackson has finally bowed out in a manner befitting her status in Australian basketball
THEATER & DANCE・1 DAY AGO
The Guardian

The US and its allies would destroy Russia’s troops and equipment in Ukraine – as well as sink its Black Sea fleet – if Russian president Vladimir Putin uses nuclear weapons in the country, former CIA director and retired four-star army general David Petraeus warned on Sunday.
MILITARY・8 HOURS AGO
The Guardian

In a press conference, Ron DeSantis said food, water and other supplies are being distributed to those who did not evacuate
FLORIDA STATE・2 DAYS AGO
The Guardian

Football Australia has started the process for disciplinary action against Sydney United 58 after some of the club’s supporters displayed Nazi symbols and salutes during the Australia Cup final. It came as United, formerly known as Sydney Croatia, issued a statement late on Sunday night condemning supporters who booed...
RUGBY・1 HOUR AGO
The Guardian

An unaffiliated doctor involved in the decision to clear the Miami Dolphins quarterback Tua Tagovailoa after he was evaluated for a concussion during a recent game against Buffalo has been fired, according to an ESPN report on Saturday. ESPN, who cited a National Football League source, said the neurotrauma consultant...
NFL・1 DAY AGO