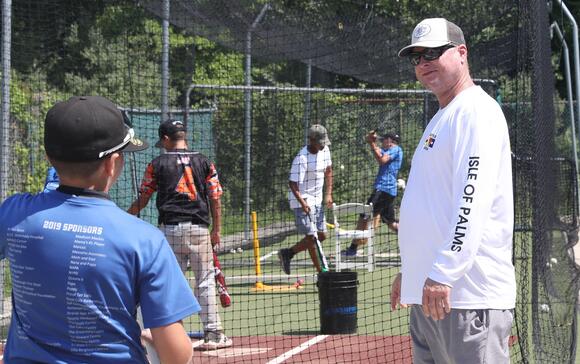 Even the best of teams sometimes need a little boost - and that's exactly what the 1998 Yankees got that September from Shane Spencer, who became "the Home Run Dispenser" with 10 dingers in 67 at-bats for the eventual World Series champions.

Spencer was part of Old-Timers Day this year, and he caught up with our Danielle McCartan to talk Subway Series (which he saw both sides of, having played for the Mets in 2004), what he's doing now, and more - take a listen!

Braves GM: 'When Carlos Correa ends up a Minnesota Twin, I am pumped!'

Braves general manager Alex Anthopoulos had a hilarious response when talking about the reaction to Carlos Correa signing with the Twins instead of the Mets.
MINNEAPOLIS, MN・1 DAY AGO
WFAN Sports Radio

BT rips Hall of Fame after Scott Rolen's induction: 'It's a joke'

Brandon Tierney can’t believe Scott Rolen is in the Baseball Hall of Fame, while the likes of Pete Rose, Don Mattingly, and Thurman Munson are not.
2 DAYS AGO
WFAN Sports Radio

Gio sounds off on Hall of Fame debates: 'Biggest waste of time'

Gio is clearly sick of hearing fans and writers argue about current or potential Hall of Famers, and can’t understand why people care so much.
2 DAYS AGO
OnlyHomers

Tragic news has struck the world of professional wrestling with the word that one of wrestling's biggest stars has lost his life at the age of 38. Celebrity entertainment outlet TMZ, which is known for breaking the news of many deaths of famous people around the world, broke the news of the death of legendary wrestler Jay Briscoe, who has tragically died in a car crash at the age of 38.
13 HOURS AGO
WFAN Sports Radio

James Dolan says he is going to stop liquor sales at a future Rangers game at MSG to make a point about the State Liquor Authority threatening their license.
NEW YORK CITY, NY・1 DAY AGO
WFAN Sports Radio

Kyrie Irving’s agent told Bleacher Report that the All-Star wants to stay in Brooklyn and sign a long-term contract extension with the Nets.
BROOKLYN, NY・1 DAY AGO
WFAN Sports Radio

BT is all in on Jets getting Aaron Rodgers: 'Been handed a gift'

Brandon Tierney says the Jets have been “handed a gift” with Aaron Rodgers, and now that Nathaniel Hackett is on board, the Jets have to go all in and get Rodgers.
NEW YORK STATE・1 DAY AGO