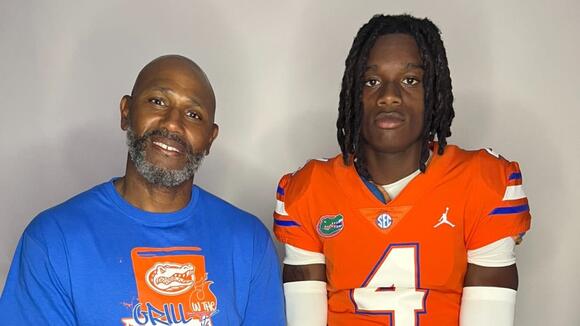 Bradenton (Fla.) IMG Academy 2024 cornerback Desmond Ricks has a simple priority when it comes to selecting his future college.

"My development is the No. 1 thing that I'm looking for from a school," Ricks told AllGators following his visit to Florida this past weekend.

Which, Ricks explained, is why he chose to visit the Gators over every other school that came calling during July's one-week window of in-person recruiting.

Ricks is intrigued by what UF cornerbacks coach Corey Raymond has to offer when it comes to developing defensive backs. He made that much clear prior to his visit while previewing the trip earlier in July, and shared a similar sentiment when his time in Gainesville for the weekend was over.

"Coach Raymond is the reason I'm here," Ricks said. "Everybody else is having their cookout today, but I decided to come here to see coach Raymond because he's the best doing it ... with him being known for developing players."

The trip marked Ricks' second to Florida this year, but his first since January, and in that stretch, new head coach Billy Napier has made more drastic changes to how the program operates which Ricks was able to observe over the weekend.

He also enjoyed touring the Gators' nearly complete Heavener Football Training Center, which had much construction remaining when Ricks was last on campus.

"It meant a lot to me and my family, seeing him at the door. [He's] a real down-to-Earth guy," Ricks said of Napier. "You can see that there's a change in Gainesville."

Ricks, viewed as the No. 1 corner and No. 2 overall prospect in the class of 2024 by the On3 Sports consensus, intends to take unofficial visits to LSU, Miami and Alabama games this upcoming season, and potentially one to a Florida game as well.

Stay tuned to AllGators for continuous coverage of Florida Gators football, basketball and recruiting. Follow along on social media at @ SI_AllGators on Twitter and Florida Gators on Sports Illustrated on Facebook.

The Florida Gators are building steam in the 2024 recruiting class with the addition of in-state linebacker Adarius Hayes.
GAINESVILLE, FL・4 HOURS AGO
AllGators

After missing one contest due to a head injury, Gators forward Alex Fudge returns to the hardwood against Kansas State.
GAINESVILLE, FL・3 HOURS AGO
AllGators

Florida Gators at Kansas State: Preview, Info, Where to Watch and More

Everything you need to know before Florida takes on No. 5 Kansas State in the SEC/Big 12 Challenge.
GAINESVILLE, FL・8 HOURS AGO
AllGators

Looking Back On, and Forward To, Florida's RB Room

All Gators is projecting roles and fits for each of Florida's 2023 offseason transfers. Next up: Running back Cameron Carroll.
GAINESVILLE, FL・1 DAY AGO
AllGators

Which prospects are visiting the University of Florida for the second rendition of Junior Day on Saturday?
GAINESVILLE, FL・10 HOURS AGO
AllGators

Myreon Jones' career-night propels the Gators to a 81-60 victory over South Carolina.
GAINESVILLE, FL・2 DAYS AGO