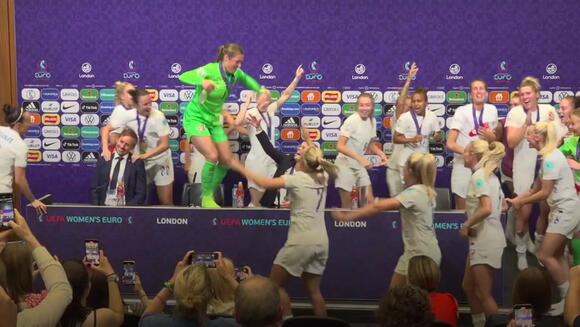 In a historic final, the Lionesses won the final against Germany 2-1 in front of a record 87,000-strong European Championship crowd at Wembley Stadium, including Prince William , who handed them the trophy.

Sharing a picture of the dream team on Instagram, and addressing the Lionesses , Adele wrote: “You did it!! It’s come home!!Congratulations @lionesses what a game changer!! So proud”.

“Let’s f****** go girls!” Shania Twain posted on Twitter, noting, “You know these women will have had to fight for respect from the first moment they picked up the ball.”

Actor and comedian Miranda Hart tweeted that she was “crying”, calling the Lionesses’ victory “so important”.

She added: “Too emotional to articulate more. I am glad there are seven-year-olds watching this who wanted to be a goalkeeper like I did! But didn’t think it was ‘appropriate’ or ‘allowed’ to voice it. Thank you Lionesses. #Lionesses”

“A Wembley final win, in extra time, against Germany. Beating US in a WC Final might be bigger in sporting terms, yes. But culturally, nothing could be bigger than this. Congrats, #Lionesses !” Hunt continued.

Members of the royal family have also congratulated the women’s team , with the Duke of Cambridge writing that the “whole nation couldn’t be prouder” of the Lionesses as the UK witnessed “history in the making”.

George Clooney has hilariously agreed with pal Brad Pitt, after he called the filmmaker one of the most “handsome men” in the world. The 61-year-old actor addressed and supported the Fight Club star’s compliment on Wednesday, when he and his wife Amal Clooney made an appearance on CBS This Morning. Pitt first called Clooney “handsome” last week, in a video segment for US Vogue.“Well he’s right about that, let’s face it. He’s right,” Clooney said, after his wife chimed in to agree and said that her husband is “not modest”.The Ocean’s Eleven star continued to make fun of the...
CELEBRITIES・1 DAY AGO
The Independent

Queen Margrethe II of Denmark has announced her intention to strip four of her grandchildren of their royal titles, a decision that left some members of the Danish royal family shocked and “saddened”. The monarch’s decision was announced in a statement shared by the royal palace on Wednesday,...
EUROPE・1 DAY AGO
The Independent

A famous Indian YouTuber died in a road accident on Monday.Abhiyuday Mishra, who also ran a YouTube channel named Skylord, was killed in the central Indian state of Madhya Pradesh after a truck rammed into his motorbike.Known for creating gaming videos on his YouTube channel, he used to upload clips of his gameplay of Garena Free Fire, a multiplayer battle mobile game, similar to PubG. He has over 424,000 followers on Instagram and 1.64 million subscribers on YouTube.Mishra was on a bike trip with a group that was promoting tourism, reportedly sponsored by the Madhya Pradesh government. The tour began...
ACCIDENTS・2 DAYS AGO
The Independent

The King will host his first state visit as monarch from the President and First Lady of South Africa.President Cyril Ramaphosa, accompanied by Tshepo Motsepe, have accepted the invitation to attend Buckingham Palace in November.It is understood the visit was in the early stages of being planned before the Queen’s death in September.The King has visited South Africa on a number of occasions since his first tour of the country, which included Pretoria, Johannesburg, Durban and Cape Town, in 1997.His last trip was in 2011, when along with the Queen Consort, then the Duchess of Cornwall, he carried out engagements...
POLITICS・2 HOURS AGO

A smiling family portrait of the King, his son who is the first in line to the throne and their wives has been released by Buckingham Palace. The image of King Charles III and his Queen Consort, standing alongside the Prince and Princess of Wales, was taken at Buckingham Palace on September 18, just 10 days after Queen Elizabeth II’s death.
ENTERTAINMENT・1 DAY AGO
The Independent

Hundreds of trees that made up a centrepiece of the Platinum Jubilee celebrations are to be planted across Britain in honour of the late Queen.The 350 saplings made up the Tree of Trees, a 69ft sculpture installed outside Buckingham Palace in June to mark the monarch’s seven decades on the throne.Having been cared for over the summer by a Cambridgeshire tree nursery, they will be sent across the country to be planted by an “inspiring” community organisation.As part of the Queen’s Green Canopy (QGC), an initiative set up for the jubilee, every county in the UK will receive at least...
U.K.・2 HOURS AGO
The Independent

Two rare photographs of The Beatles playing at the Cavern Club in Liverpool have been discovered.The images were captured in July 1961, over a year before the band released their debut single Love Me Do.They show John Lennon and Sir Paul McCartney at the microphone, with George Harrison on guitar and a partially obscured Pete Best, the group’s original drummer.Beatles historian and author Mark Lewisohn said: “Set inside Liverpool’s cramped and dank Cavern Club, these previously unseen photos capture The Beatles playing for a lunchtime or evening audience in July 1961.“Just back from Hamburg – slogging 500 stage hours in...
MUSIC・2 HOURS AGO

When a reporter asked Rihanna what she was looking for in a man, she gave this iconic reply: "I'm not looking for a man. Let's start there."
CELEBRITIES・6 MINUTES AGO
The Independent

The father of schoolgirl Molly Russell made a direct appeal to Meta to stop publishing a “demented trail of life-sucking content” after a coroner ruled the “negative effects of online content” had contributed to her death.Ian Russell said he hoped the the coroner’s conclusions would be an “important step in bringing about much-needed change”.He said his message to Instagram – and Facebook – boss Mark Zuckerberg was simpy “to listen... and then do something about it.”Molly, from Harrow in northwest London, ended her life in November 2017, prompting her family to campaign for better internet safety.Coroner Andrew Walker said the...
MENTAL HEALTH・2 DAYS AGO
The Guardian

Football Australia has started the process for disciplinary action against Sydney United 58 after some of the club’s supporters displayed Nazi symbols and salutes during the Australia Cup final. It came as United, formerly known as Sydney Croatia, issued a statement late on Sunday night condemning supporters who booed...
RUGBY・24 MINUTES AGO
Showbiz Cheat Sheet

Babyface has been married twice: once to a woman he's build a media empire with. His second wife is a dancer and actress who had a popular role on 'Moesha.'
CELEBRITIES・17 MINUTES AGO

Aaron Ramsdale believes Arsenal’s poor end to last season has lit a fire under the players for the current campaign – revealing they now have an “Eff it” approach if something goes wrong.A 3-1 win over north London rivals Tottenham on Saturday ensured Arsenal remained at the top of the Premier League as goals from Thomas Partey, Gabriel Jesus and Granit Xhaka proved too much for 10-man Spurs.Harry Kane had levelled from the penalty spot – his 14th goal in 18 north London derbies – but when Emerson Royal was sent off for a nasty challenge on Gabriel Martinelli, the...
PREMIER LEAGUE・4 HOURS AGO
The Independent

A climate activist has poured what she claimed was “human faeces” on a memorial for the late war veteran Sir Captain Tom Moore in protest against the use of private jets.A video of the protest was posted online by a campaign group calling itself End Private Jets, which is calling for a ban on private planes to reduce the amount of harmful carbon being emitted into the earth’s atmosphere.“Every time a private jet takes off, it pours a bucket of s*** and blood on everything Captain Tom stood for,” Maddie Budd, a 21-year-old former medical student, said after pouring a...
PROTESTS・7 HOURS AGO
The Independent

Slipknot’s Shawn Crahan: ‘I know what real evil is… My past problems are minuscule now compared with the path my wife and I are on’

“That’s always a loaded question,” replies Shawn Crahan. As clown, percussionist and creative engine of Slipknot, Crahan is familiar with loaded questions. With their 1999 debut, the heavy metal band unexpectedly punctured the mainstream. Their skull-splitting sound and spine-chilling masks attracted fans en masse, intense scrutiny in tow. “My hardcore fans are gonna hate me for what I say.”
MUSIC・1 DAY AGO
The Independent

Moeen Ali believes England’s series win over Pakistan proved how “dangerous” they will be at this month’s Twenty20 World Cup, but stopped short of putting his side among the tournament favourites.Moeen has deputised for regular skipper Jos Buttler throughout a historic seven-match trip to Karachi and Lahore and finished up with a trophy in his hands.The tourists breezed to a 67-run success to claim a 4-3 victory, posting 209 for three then choking off the reply at 142 for eight.Over the course of the visit, Harry Brook has emerged as a potential superstar in the making, the returning Alex Hales...
SPORTS・5 HOURS AGO
The Independent

Buckland: Brexit ‘freedom’ will bring a freeport to Wales for the first time

The Government is using its Brexit “freedom” to “bring a freeport to Wales for the very first time”, Welsh Secretary Sir Robert Buckland has said.He told Conservative Party members at Birmingham’s International Convention Centre (ICC) that “being a proud unionist doesn’t make anyone less Welsh and being proudly Welsh doesn’t make anyone less of a unionist. The two go hand in hand”.He added: “We are all part of one United Kingdom with shared values and we are stronger together.”Sir Robert turned his fire on Labour and Plaid Cymru, which he described as a “party more focused on stoking division and ripping...
INDUSTRY・7 HOURS AGO
The Independent

Strictly 2022 results: Kaye Adams is the first contestant to be eliminated

The first celebrity has been eliminated from Strictly Come Dancing.An eventful live show on Saturday (1 October) saw all 15 stars hit the dance floor with their professional partners for the second time.Molly Rainford and Carlos Gu emerged at the top spot with a total of 65 points – a combination of their scores from this week and last.Meanwhile, Tony Adams and Katya Jones found themselves at the bottom with only 37 points.The judges’ scores were added with the results of the viewer’s votes to decide the lowest scoring two couples facing the dance off.Sunday night’s (2 October) results...
TV SHOWS・6 HOURS AGO
The Independent

Erling Haaland and Phil Foden took centre-stage as the Manchester derby proved the highlight of the latest round of Premier League fixtures.The Norway international and England’s Foden both plundered hat-tricks as City romped to a 6-3 victory over United, while the bragging rights in north London ended up in Arsenal territory.Here, the PA news agency takes a look at what we learned from the weekend’s games.Destruction derbyErik ten Hag knew when he arrived at Manchester United that there was a sizeable gap between the club he inherited and noisy neighbours Manchester City as he attempted to turn them back into...
PREMIER LEAGUE・8 HOURS AGO
The Independent

A total of 18 Guinness World Record titles were broken by those taking part in the London Marathon on Sunday, including the fastest marathon for a male dressed in pyjamas and a female in a toga.Thousands descended on the capital’s streets for the annual race which saw many don fancy dress, either as a personal challenge or in aid of a charity.As official Guinness World Records adjudicator Will Munford stood on the finish line to verify each one, it was David Jones who secured the fastest time of all the records as he ran the marathon in two hours, 45...
WORLD・7 HOURS AGO