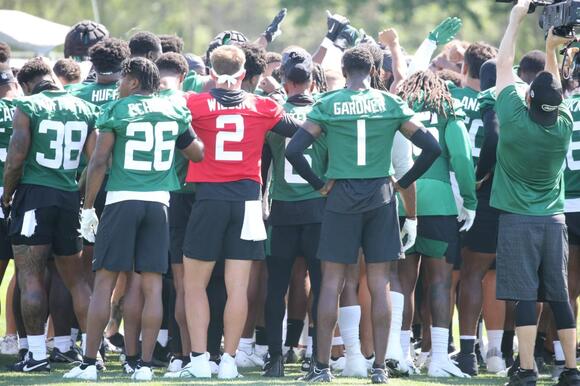 When the Jets let fans into the facilities for the first time in the new season, the anticipation was palpable. On the heels of a Kwon Alexander signing to bolster the linebacking corps, it became apparent — if it wasn’t already — that the Jets are ready to be relevant again. The influx of new faces with the inevitable year of growth from the younger guys on the roster is providing strong evidence to the notion that New York’s 11-year playoff drought might just be in jeopardy.

Of course, the product on the field has to match the energy on the sidelines and in the locker room. But the first few days of training camp was a good initial step in the right direction. When the pads come on and the hits ensue, Robert Saleh and his staff will get a better look at what their team is capable of.

Despite all the roster changes, the Jets will only go as far as Zach Wilson takes them. The question coming into camp was whether or not the additional pieces and experience can rectify some of the accuracy and decision-making woes that troubled him during his rookie season. The results have been somewhat of a mixed bag.

Wednesday was the start of 11-on-11 drills, and it was likely Wilson’s best day of the four. He finished 7-for-11 including a drop from Tyler Conklin. He hit Conklin on the very next play in the flat. He then found CJ Uzomah twice, once up the seam for a big gain before hitting Garrett Wilson in stride on an out route.

Immediately, it’s clear that Wilson will benefit from the additions of Garrett Wilson, Uzomah, Conklin and Breece Hall. Throw in a healthy Elijah Moore and Corey Davis and this is a legitimately formidable receiving corps.

Thursday and Friday saw Wilson battling the pressure from the defensive line. With Mekhi Becton still working his way back into playing shape and George Fant coming off an injury himself, the edge rushers found themselves in the backfield early and often, forcing the young quarterback to scramble and improvise. With full pads and in game situations, some of Wilson’s completions would have been sacks or throw-aways, but he still looked comfortable moving outside the pocket to avoid the rush. A pretty deep ball to Moore would likely have been negated by a Bryce Huff sack, but seeing the two connect deep down the field was a promising sight.

The pressure forced a couple interceptions on Friday, but save for those two passes, Wilson was 10-for-11 with three touchdowns. After tossing a dart to Davis in the corner of the end zone, he closed practice with back-to-back touchdown passes to Garrett Wilson and Davis.

Saturday was the toughest day for Wilson, as the offensive line afforded him little time to throw on occasions. Still, Wilson was baited by DJ Reed, who jumped in front of a pass at the goal line and ran it back for a pick-six. He bounced back with two consecutive touchdown passes to close the first week of camp, a stark improvement from his first practice that saw him go 0-for-2 from the five-yard-line thanks to another pick from Reed.

The accuracy and decision-making issues aren’t totally gone for Wilson, and that’s to be expected. A Josh Allen-type leap is exceedingly rare, but Wilson put together some of the wow throws with the type of zip that show why he’s the face of the franchise. He’s capitalizing on opportunities where his receivers get separation, situations that were few and far between a year ago. He’s reading the pressure in his face and scrambling for positive gains. He’s developing a legitimate rapport with the new faces, especially Uzomah and Garrett Wilson.

If the offensive line can continue to progress, as Becton and Fant should as they work their way back to normalcy, the output should be a positive one. It’s also worth noting that secondary figures to be a strength of this Jets team, not a weakness. So when Wilson throws a pick in practice, it’s not against rookie undrafted free agents. It’s against a legitimate CB1 in Reed, who has been one of the best players on the field thus far. Sauce Gardner hasn’t had any highlight plays yet, but his coverage prowess is very apparent, using his 6-foot-3 frame to blanket the Jets receivers. Jordan Whitehead had a pick Saturday as well.

New York’s defense figures to be much improved, and the secondary is challenging Wilson on a daily basis. The talent chasm from practice to Sundays isn’t as wide as it was a year ago. That’s a good thing for a young quarterback looking to grow in his second year.

The pads come on this week, and while Wilson won’t be taking hits, the rest of the game around him will more closely mimic what opening night in Baltimore will look like. If he can channel the better parts of what he’s shown thus far and just cut out a couple of errant passes, that game will look extremely winnable.

Follow Max Schneider on Twitter ( @ Max_Schneider15 ). Be sure to bookmark Jets Country and check back daily for news, analysis and more.

Tom Brady's 'Inexcusable' Blunder Is The Talk Of The NFL

The Tampa Bay Buccaneers quarterback made a massive mistake in the closing seconds against Green Bay.
TAMPA, FL・1 DAY AGO
thecomeback.com

The NFL world was hit with stunning news on Monday afternoon when news broke that Cleveland Browns star defensive end Myles Garrett had been involved in a single-car crash that sent both him and his female passenger to the hospital after the car flipped multiple times. Garrett was reportedly on...
CLEVELAND, OH・1 DAY AGO
92.9 FM Sports Radio

Official 92.9 FM ESPN PLAY BY PLAY. All Upcoming games on 929 ESPN and 92.9 HD2. Tune in to listen and download our app today! Radio.com the official WMFS app!
SPORTS・1 HOUR AGO