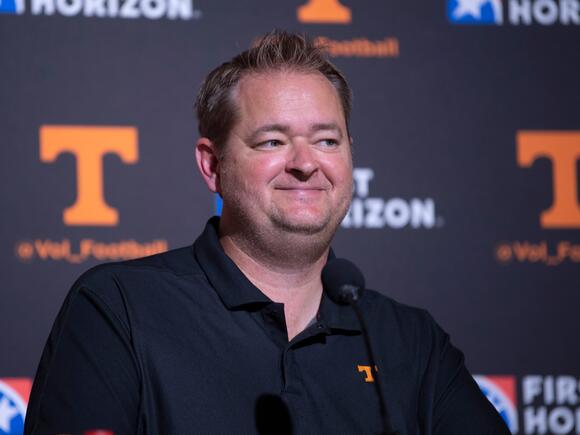 Josh Heupel’s first season at Tennessee went well, and projections say his second could be even better.

It’s a fair assumption. The Vols start preseason practice Monday with 14 of 22 starters returning — including the bulk of their record-breaking offense — from a 7-6 team that hit its stride in the second half of last season.

Progress in year two also has been the norm for UT and SEC coaches.

Among the eight SEC coaches with at least two seasons at their current school, seven had a better record in their second season than their first. Only Texas A&M’s Jimbo Fisher took a step back, dropping from 9-4 in 2018 to 8-5 in 2019.

Those eight SEC coaches averaged 3.4 more wins in their second season than their first. For Heupel, that would mean at least 10 victories this season, which seems like a high bar to reach. No UT team has posted 10 wins since the 2007 SEC East champion under Phillip Fulmer.

Nevertheless, college football fans are conditioned to expect progress from their coaches. Heupel is no exception, and he knows that.

“Instead of using the word ‘belief,'” Heupel said, “‘Expect’ is something that we’ve talked about. There’s a big difference between teams that believe and teams that expect. We’ve got to continue to work in a way that we expect to win every Saturday.”

But the Vols' jump might not be as sizable as other teams for one key reason: They were better in year one than most.

Neither Jones nor Pruitt won six games for bowl eligibility in his first season. But Heupel’s 7-6 team probably played closer to nine wins than six because it suffered close losses to Pittsburgh, Ole Miss and Purdue.

“We shot ourselves in the foot in some games,” safety Trevon Flowers said. “So last year was kind of a base, but now guys can see the potential we have and how good we can be.”

Being that competitive in your first season is an outlier in the SEC.

Arkansas’ Sam Pittman improved by six wins with a 3-7 record in his first season and a 9-4 mark in his second. Lane Kiffin improved by five wins at Ole Miss, jumping from 5-5 in a COVID-shortened season to 10-3 last season.

They made progress, but none of those had as many wins as Heupel in their first season. Heupel's only contemporaries in first-year success were Nick Saban, Kirby Smart and Shane Beamer.

Beamer was 7-6 at South Carolina last season. He and Heupel shared the Steve Spurrier Award, which goes to the best first-year coach in college football. That’s important context when considering how much better the Vols could be this season.

Why Tennessee should be better this season

UT was picked second in the SEC East in the USA TODAY Sports Network preseason poll . The Vols haven’t finished that high since 2015, but there are reasons for optimism.

Quarterback Hendon Hooker and wide receiver Cedric Tillman, both preseason All-SEC selections, and four starters on the offensive line are back for the highest-scoring team in UT history, averaging 39.3 points per game.

Flowers, defensive end Byron Young and linebacker Jeremy Banks give the Vols a preseason All-SEC pick in all three levels of the defense. But there are big questions in the secondary, which must rebuild after ranking last in pass defense in the SEC.

UT’s schedule is comparable to last season. The Vols will play three inferior non-conference opponents, beginning with the Sept. 1 opener against Ball State. They will face Pittsburgh for a second straight year. The Ole Miss game as a cross-divisional foe is replaced by a trip to LSU this season.

“We are expecting to win, and that’s everybody’s mindset,” said running back Jabari Small, who led UT with 796 yards rushing and nine TDs. “We’ve got to put in the work (in preseason practice) and that work will build confidence.

"Put that together and you should win a lot of games.”

This article originally appeared on Knoxville News Sentinel: How Josh Heupel could break the mold if Tennessee football wins big in his second season