I don’t know why Eric Paschall is listed at 6’6″ — he measured 6’6″ at the NBA combine without shoes.

2) It isn’t brilliant GMing to give out a SRP for Paschall, for him to have a good season at or above expectations, and then not give him the QO. – 3:25 PM

Can confirm @Darren Wolfson’s tweet that it will be a two-way contract for Eric Paschall with the Timberwolves. – 2:49 PM

A source says the Eric Paschall deal is a two-way contract. – 2:48 PM

The first thing I think of when you say Eric Paschall is that he’s best friends with Donovan Mitchell. But I think we can rule that relevance out for obvious reasons.

Second thing I think about is what he does with his feet when he shoots. The heel kick into floating feet J… pic.twitter.com/z6ZZQHtYOy – 2:43 PM 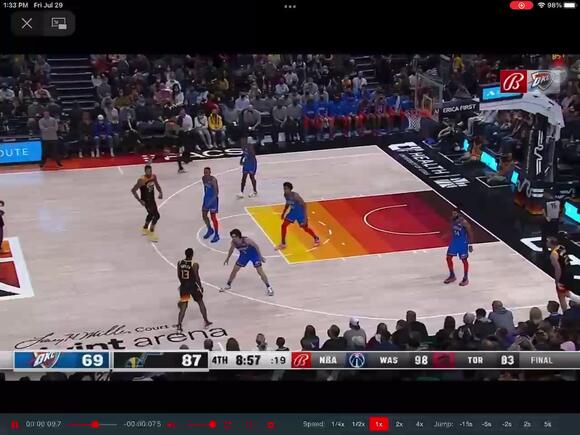 The Minnesota Timberwolves added some good shooters in the roster. Last season’s percentages prove their ability to shot.

Despite the interest of Panathinaikos, Eric Paschall will continue his career in the NBA

Panathinaikos made their bid for Eric Paschall, but the former Utah Jazz forward turned the Greens’ offer down.

Jon Krawczynski: It is a 2-way deal for Eric Paschall with the Wolves, per source. -via Twitter @JonKrawczynski / July 29, 2022

The Greek basketball world was shaken when SDNA.gr announced yesterday about Panathinaikos OPAP Athens being interested to sing NBA forward Eric Paschall. However, Greek website sport24 and its journalist Alexandros Trigas report that the player has found an offer from an NBA team and will stay in the top basketball league next season. SDNA.gr later confirmed the information. -via BasketNews / July 24, 2022

CAMDEN, N.J. — The Philadelphia 76ers went out and got busy in the offseason, bringing in PJ Tucker fairly quickly in free agency. The addition brings toughness and an ability to contribute at both ends, but it also means Tobias Harris has to change positions again. Harris, a natural...
PHILADELPHIA, PA・2 DAYS AGO
USA TODAY Sports Media Group

Shaq responds to Nets' Ben Simmons calling him a hater

Montrezl Harrell, other additions react to joining Sixers in the offseason

CAMDEN, N.J.–The Philadelphia 76ers knew what they had to address in the offseason as their additions were all focused on toughness and adding two-way players to the roster. There have been too many times when the Sixers came up short in both of those departments. President Daryl Morey and...
PHILADELPHIA, PA・2 DAYS AGO
USA TODAY Sports Media Group

The three stars the Lakers could pursue in 2023 free agency

There is a growing feeling that this year’s edition of the Los Angeles Lakers will be significantly better than last year’s disastrous iteration was. If anything, they will be far more competitive this year, with a renewed emphasis on defense, fast-break basketball and attention to detail. But no...
LOS ANGELES, CA・9 HOURS AGO

After an offseason victory lap following the Golden State Warriors win in the 2022 NBA Finals, the defending champions are officially back on the court. On Sep. 24, members of the team reported to San Francisco for the first official practice of training camp and media day. The Warriors will get practice underway in the Bay Area before a trip to Tokyo to start the preseason overseas against the Washington Wizards.
SAN FRANCISCO, CA・1 DAY AGO
USA TODAY Sports Media Group

CAMDEN, N.J.–The Philadelphia 76ers were able to accomplish their goals in the offseason as they went out and brought in guys that fixed their issues which were toughness and two-way players. After being eliminated in Round 2 of the playoffs for the fourth time in five seasons, it was...
PHILADELPHIA, PA・2 DAYS AGO
USA TODAY Sports Media Group

CHARLESTON, S.C.–As the Philadelphia 76ers come together for training camp at The Citadel in Charleston, SC, the focus is on James Harden. The Beard begins his first full season with the Sixers after the big deadline deal and there is tons of anticipation surrounding the coming season. In 21...
CHARLESTON, SC・1 DAY AGO
USA TODAY Sports Media Group

New Orleans Pelicans rookie Dyson Daniels this week revealed that shooting was a major emphasis during his offseason workouts in preparation for his rookie year. Daniels, who was born in Australia, averaged 11.3 points, 6.2 rebounds, 4.7 assists and 1.9 steals last season with the NBA G League Ignite. He emerged as perhaps the top prospect on the team and is considered one of the best perimeter defenders in this rookie class.
NEW ORLEANS, LA・10 HOURS AGO

Markieff Morris to play important role for Nets this season

Even though the attention for media day was mostly focused on the drama between Kevin Durant and the Brooklyn Nets organization, we did hear some on how to franchise would utilize certain players, namely Markieff Morris. Morris believes that he brings a level of toughness and physicality to the team,...
BROOKLYN, NY・12 HOURS AGO
USA TODAY Sports Media Group

CHARLESTON, S.C.–Philadelphia 76ers guard Tyrese Maxey has been on the rise since he entered the league. Ever since his debut, the young man out of Kentucky has made big steps forward as he continues to develop and morph into a star in this league. As he heads into his...
NBA・12 HOURS AGO
USA TODAY Sports Media Group

Damian Lillard praises Shaedon Sharpe: 'The talent is off the charts'

Portland Trail Blazers rookie Shaedon Sharpe basically hasn’t played basketball in a competitive setting in nearly a year, but the seventh pick is impressing those around him in the NBA. Sharpe was the top high school recruit in 2022 before reclassifying to enroll at Kentucky early. He ultimately never...
PORTLAND, OR・12 HOURS AGO
USA TODAY Sports Media Group

The National Basketball Association is cranking up their 2022-2023 season with media day underway. The NBA has undergone a new wave where more players change teams every off-season, like musical chairs, to compete for a ring. One of those players with new threads is former Tar Heel Danny Green, who will be playing for the Memphis Grizzlies this season. Green was traded from the 76ers to Memphis for the No.23 overall pick and DeAnthony Melton. Green experience will be significant for the Grizzlies with his championship experience, winning rings with the San Antonio Spurs, Toronto Raptors, and L.A. Lakers. Green was all smiles...
MEMPHIS, TN・7 HOURS AGO
USA TODAY Sports Media Group

CHARLESTON, S.C.–The Philadelphia 76ers are working on playing with different lineup combinations as they move forward with a new roster. They made plenty of additions in the offseason that are expected to help them take the next step in the Eastern Conference. One of the additions they made was...
PHILADELPHIA, PA・10 HOURS AGO
USA TODAY Sports Media Group

After taking a 3-1 lead in the 2000 Western Conference Finals over the Portland Trail Blazers, it looked like the Los Angeles Lakers were a lock to reach the NBA Finals for the first time in nine years. Instead, they dropped the next two games, setting up a nerve-racking Game...
LOS ANGELES, CA・8 HOURS AGO
USA TODAY Sports Media Group

Anthony Davis has been the subject of lots of criticism from Los Angeles Lakers fans over the last couple of years, and one of the bones of contention for him has been his 3-point shooting. When the Lakers won the NBA championship during the 2019-20 season, Davis shot very well...
LOS ANGELES, CA・9 HOURS AGO

CHARLESTON, S.C.–As the Philadelphia 76ers prepare for the 2022-23 season, all eyes will be on the star duo of James Harden and Joel Embiid. The big fella is looking to build off an incredible 2021-22 season while Harden is looking to have a successful full season in Philadelphia. As...
PHILADELPHIA, PA・11 HOURS AGO
USA TODAY Sports Media Group

Where is Ohio State in ESPN's Power Rankings after Week 4

As Ohio State continues its journey along its 2022 season, we like to check in with some of the national media to see what the perception of what’s going on in Columbus looks like. One of those places we check every week is ESPN and its weekly power rankings of all the teams in the FBS.
COLUMBUS, OH・12 HOURS AGO