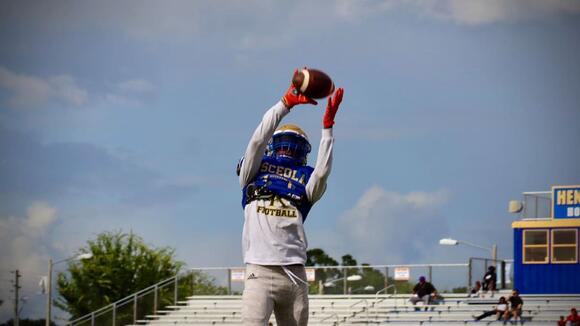 The expected continuation of an unrivaled development history.

One of the most prolific coaches in college football continues to make splashes on the recruiting trail, even with the change of scenery from Baton Rouge to Gainesville this offseason.

Cornerbacks coach Corey Raymond made a monumental move in the midst of the coaching turnover at both Florida and LSU this offseason. Leaving the program he had become a mainstay with for the past decade — namely due to his construction and longevity of a production factory at his position for the Tigers, landing top recruits before molding their skillsets to become first round NFL talents — Raymond immediately brought a sliver of legitimacy to the new staff as it assumed control at the University of Florida.

Raymond has lived up to that billing in the ensuing months, drawing considerable interest from nearly every defensive back he contacts and stacking his room with high-level talent already.

The talent in the 2023 culminated with the Gators landing highly touted defensive back Ja’Keem Jackson on Thursday. He shared his intrigue to learn under Raymond’s tutelage with the hope to become one of the names on the cornerback coach’s illustrious list of NFL stars.

Possessing desirable length, speed and ball skills, the former wide receiver turned cornerback ago quickly rose up recruitment boards as a prospect this spring. He played in just three games as a cornerback, but has flashed the traits that slate him for potential stardom at the next level.

He feels he fits perfectly in the press-heavy Florida system to grow to meet those expectations.

How will Raymond elevate him to that status? By drawing wisdom from his many successes of the past.

Having the answers to nearly any question that could be thrown at him due to the laundry list of athletes to learn under his wing to excel in their collegiate and professional careers, Raymond is willing to draw parallels to his former athletes.

Obviously, everyone isn’t the same, and comparisons of play style don’t always equate to production, but the luxury of being able to share player similarities with a young talent before revealing that you coached that player adds to the aforementioned legitimacy in his recruitment pitch.

Jackson's comparison is to an All-Pro NFL cornerback and former LSU star under Raymond.

“Yeah, he compared me to Tre'Davious White , but I'm a little taller,” Jackson said. “He said I play just like him."

Raymond looks to continue his impressive track record of development with the gifted, but still raw, cover corner. Jackson looks for the same.

“He's just going to perfect my craft, get my techniques down pat, my press-man, off man, tackling, shedding blocks. He's just a good developmental coach."

Jackson is planning to sign to the Gators in December and is in the process of become eligible for an early enrollment. If he does get on campus sooner rather than later, Raymond can begin the process of sculpting a relatively moldable skillset for the talented player who is still relatively new to the position.

Turning into anything like White as a player, mixing the play style comparison with similar production, gives Florida’s secondary a great chance to re-establish the dominance it experienced in the mid-2010s and prior.

That is, and will always be, the goal with Raymond in charge of the cornerback play.

Stay tuned to AllGators for continuous coverage of Florida Gators football, basketball and recruiting. Follow along on social media at @ SI_AllGators on Twitter and Florida Gators on Sports Illustrated on Facebook.

It’s the sound of hearts breaking across Philadelphia and the state of Pennsylvania… and let’s be honest, everywhere else in the country, too. Eagles quarterback Jalen Hurts made a very rare public appearance with his girlfriend Bryonna “Bry” Burrows after the NFC Championship game this past Sunday, which is a surprise to many fans, as he is extremely private about his life outside of football.
PHILADELPHIA, PA・22 HOURS AGO
The Comeback

After making the conference championship game for a second time in as many seasons, Cincinnati Bengals suffered a tough loss to the Kansas City Chiefs following a costly penalty in the final seconds of the game that set up a game-winning field goal for the Chiefs. It wasn’t the outcome the team had hoped for, Read more... The post Joe Burrow reacts to loss with bold message appeared first on The Comeback: Today’s Top Sports Stories & Reactions.
CINCINNATI, OH・2 DAYS AGO
Athlon Sports

The Pittsburgh Steelers and Philadelphia Eagles have been in the NFL since its inception. The two teams even briefly combined forces during World War II and called themselves the Steagles. The players and coaches didn’t like it then and the two fan bases don’t like each other now. Fans from the same state rarely get along and the vitriol was on display after the Eagles made their second Super Bowl in five seasons.
PHILADELPHIA, PA・2 DAYS AGO
AllGators

Your one-stop shop for all things Florida Gators recruiting in the class of 2024.
GAINESVILLE, FL・1 DAY AGO
AllGators