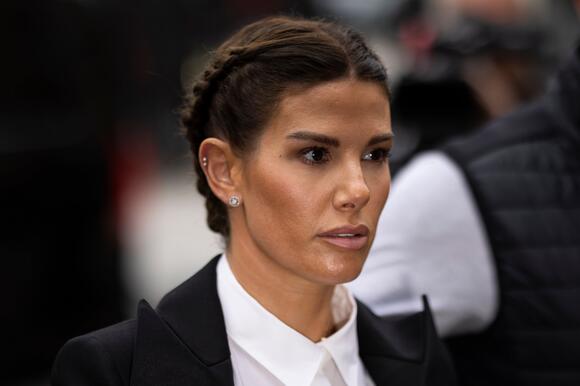 On Friday, it was revealed that Rebekah Vardy had lost the highly publicised “ Wagatha Christie “ libel trial against Coleen Rooney , which began due to a viral social media post.

In October 2019, Rooney, 36, wrote in an Instagram post that after a months-long “sting operation” she had found that Vardy, 40, had been leaking “false stories” about her personal life to the media.

Vardy, who is married to Leicester striker Jamie Vardy , denied the allegation and sued Rooney for libel.

However, the High Court in London has now ruled that Rooney’s post was “substantially true” and that it is likely Vardy’s agent, Caroline Watt, passed information to press with Vardy’s assistance.

Now that the verdict has been announced, many people have been reacting to the news on Twitter, including celebrities, such as Gary Lineker .

“Thought it might go to penalties,” the former England player tweeted with regards to the verdict.

“Vardy scores rare own goal,” he added in a subsequent tweet.

Many others have commented about the verdict on social media, often poking light at the trial.

“Think I’ll take Jamie Vardy out of my fantasy football team, have a feeling his mind will be elsewhere for a while #wagathachristie,” tweeted one person.

Another added: “ Rebekah Vardy sis… was it worth it? She could’ve firmed just being seen as a gossip now the whole world knows she was digging through people’s bags at award shows.”

One person teased that Love Island star Ekin-Su should play Vardy in her “breakout UK role”.

Another made different suggestions, tweeting: “Someone at ITV Drama is shouting ‘Activate Jodie Comer and Sheridan Smith!’ #WagathaChristie.”

One person referenced the nuances of Rooney’s “sting operation” in a playful tweet, writing: “The judge should have only told Rebekah Vardy, and no-one else, the verdict last night and sat back to see what happened. #wagathachristie.”

A second user tweeted: “Thoughts and prayers for the phone lost at sea.”

The Princess of Wales was confronted by a protester who told her that “Ireland belongs to the Irish” during a walkabout of Northern Ireland. The incident occurred on Thursday while Kate Middleton and her husband Prince William were greeting members of the crowd during a visit to north Belfast, with a video shared on social media showing the Irish woman confronting the royal.
SOCIETY・2 HOURS AGO
The Independent

Megan Rapinoe reacts to abuse scandal that has rocked US football: ‘It’s been difficult’

Megan Rapinoe has described the abuse scandal that has rocked football in the United States as “horrifying”.A report published on Monday from an independent investigation found that verbal and emotional abuse and sexual misconduct “had become systemic” in the National Women’s Soccer League (NWSL).“It’s been difficult for the players,” the USWNT star said.“Some of those players play for those clubs, have been coached by those coaches, likely have been abused in one form or another by those coaches and in some of those environments.”Click here to sign up for our newsletters. Read More Indonesia: Police officers investigated after at least 125 killed in stampede at football matchF1 Japanese Grand Prix: A lap of the Suzuka International Racing CourseFather who helped son Derek Redmond cross finish line at 1992 Olympics dies aged 81
SOCCER・2 HOURS AGO
The Independent

Substitutes Marcus Rashford and Anthony Martial sparked a comeback win in Cyprus as Manchester United survived a scare against Neil Lennon’s Omonia Nicosia in the Europa League.Erik ten Hag’s Red Devils made the 2,100-mile trip for Thursday’s Group E encounter reeling from Sunday’s chastening 6-3 derby defeat at rivals Manchester City.The United boss thanked Pep Guardiola’s side for the “reality check” ahead of the trip to Cyprus, where Omonia threatened an even greater shock after Karim Ansarifard struck a dream opener for the hosts.But ex-Celtic boss Lennon could not celebrate a famous win as Rashford’s brace and a strike from...
PREMIER LEAGUE・1 HOUR AGO
The Independent

Manchester United are hoping to get back to winning ways after a bruising 6-3 defeat to Manchester City on Sunday. They travel to Cyprus to face off against Omonia in their third Europa League fixture and could do with a win to secure their place in Group E. An opening home defeat to Real Sociedad has left Erik ten Hag’s side with no room for error and Omonia should be perfect opponents to build confidence back into the team.The Cypriot side, now managed by former Celtic, Botlon and Hibernian coach Neil Lennon, are yet to get off the mark...
UEFA・1 HOUR AGO

Arsenal will host Bodo/Glimt in the Europa League on Thursday night and in the build-up there has been talk on how one Gunners star almost signed for Liverpool.Reds boss Jurgen Klopp has detailed how he tried to bag Martin Odegaard, who signed for Arsenal at the start of last season after a loan spell.“I really like him [Odegaard]. It’s easy these days,” Klopp told TV2. “It was a bit more difficult at the start of his career when he was at Real Madrid. Then it looked like it might not go his way. I was really disappointed by that,...
PREMIER LEAGUE・1 HOUR AGO
The Independent

Mikel Arteta has spoken on the importance of squad rotation ahead of his side’s Europa League clash against Bodo/Glimt on Thursday.Arteta’s side have sparkling form this season. They are top of the Premier League, one point clear of Manchester City, and haven’t lost a Europa League match either. But the boss is aware of the hectic schedule that faces his players and so won’t hestitate to rotate the squad.“You have to go game by game and then form, performances and how players are physically and mentally will dictate how we use them,” he said. Arsenal vs Bodo/Glimt LIVE“For sure we’re...
UEFA・1 HOUR AGO