‘They get by with a lot of help from their friends’ 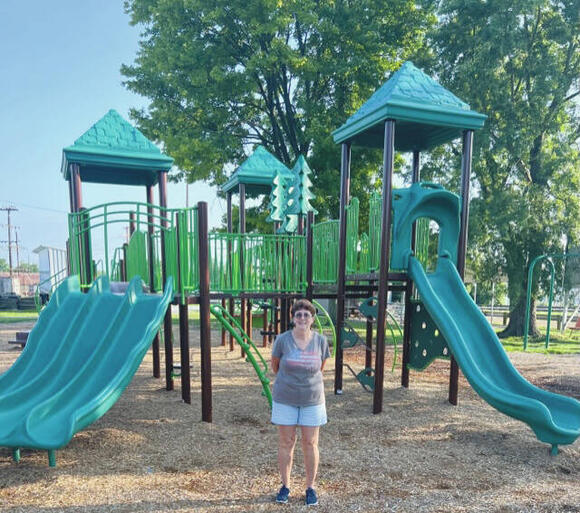 Shawn Gill, President of The Seaman Lion’s Club, stands in front of the newly installed playground climber and slides. (photo by Sherry Larson)

It’s 8 a.m. on Wednesday, and a GE Peebles crew is volunteering at the Seaman Lions Club Park to install benches. The park is lovely and has many entertaining features for children and adults to enjoy. There is a massive new playground climber and swings, including a new handicap swing. The splash pad looks enjoyable, and there’s an inviting shelter to sit in the shade and have lunch. Dustin Dean is the lead for the GE crew today. He shares, “It’s nice being part of a company that is willing to give back to the local communities. We come here for the Seaman Fall Festival, so it will be nice to see the new benches that make the park look better.”

The original Lions Club started in Seaman in 1960. Lions Club International originated to provide eyeglasses to folks and mainly school age children in need. Shawn Gill, President of the Seaman Lions Club, stated, “There are times when the school needs hygiene products or clothing and we give them money.”

Gill explained, “Each county was allotted money, and every year they have a certain subject, and this year it was the parks.” Johnson contacted Gill, told her this year’s focus was parks, and asked if Seaman Park needed anything. Gill said, “Oh, do we!” Most of what was in the park had been there since the 90’s. The original grant that was used for the park was completed by Gill’s father and the shelter is his namesake – Bill Sullivan Memorial Pavilion. Gill explained, “My Dad was instrumental in getting all of this done.” Gill is overseeing the new grant project. She says, “I’m taking it on. I’m retired, so I have the time.”

Gill continued, “Our wish list was going to be fulfilled. We needed to replace benches, and we needed to replace lights.” She points to the new playground equipment and says, “This is our brand-new playground, and the old playground equipment was about half that size, and the new benches (GE was putting together) and we’re replacing all our lights. A different group from GE is coming to do that on another day.”

GE also donated the concrete work and two benches for the park’s splash pad. Gill says, “There is never a time that it’s not busy here. The water doesn’t come on until noon, but it’s on from noon until 8 p.m. There are kids here constantly.”

The park is impeccably clean, and the lawn is well groomed. Gill said the primary focus is to keep it clean. She said, “The town of Seaman is great. A lady who works for the community said if we could get the cans and the liners, she would come and pull out the liners. She’s been wonderful.” Dolly Willis’ Boy Scout Troop walks through the park and picks up trash.

Gill hopes the current project is completed before Seaman’s big Fall Festival held September 21 – 24. The festival is famous for the baked potatoes. Gill said that the culinary classes at the vocational school are helpful in cleaning and wrapping approximately 3,000 potatoes for the festival. GE is also installing a concrete slab to the side of the pavilion, so there will be a decent area for a tent extension during the fair that can avoid getting muddy if it rains. Another event that includes the park is the Christmas tree lighting and decorating done by the American Legion.

Many of the Lions Club’s active members are older and they need to solicit new and younger members. The club will try a membership push during the Fall Festival in hopes to encourage new supporters. Gill shares, “We can’t get the younger people.”

The Seaman Lions Club Park flourishes “with a little help from their friends”. The splash pad has literally made a “splash” in the community and is the perfect example of folks from all walks of life enjoying the park and all it has to offer. Debbie Ryan of ACHWC stated, “Seaman has a beautiful park, thanks to their very active Lions Club. The Adams County Health & Wellness Coalition has been fortunate to be able to help them create such a welcoming park and beautiful green space in the center of their village where families can come and enjoy the outdoors together. It’s so nice to work with groups who want to improve their environments. The Seaman Lions Club has been a great partner over the years and has done a stellar job.” Gill concluded, “The park is free for anybody to use anytime.”

And a beautiful park it is. Seaman is fortunate to have the Lions Club and willing members of the community who dedicate much care and concentration to maintaining a space everyone can experience and appreciate.

By Sherry Larson People’s Defender It was a lovely Monday morning on September 1
WEST UNION, OH・19 HOURS AGO
People's Defender

By Mark Carpenter People’s Defender Drama reigned in the second and final round
MANCHESTER, OH・1 DAY AGO

By Sherry Larson People’s Defender On the afternoon of Wednesday, September 14 a
PEEBLES, OH・5 DAYS AGO
People's Defender

By Julia McCane-Knox It’s party time! Families will enjoy hotdogs, snacks, and activities at this Meet and G
ADAMS COUNTY, OH・11 DAYS AGO

Chapter 30- Part 5 This week, the year is 1908 and little Lena is not so little any more. Her mind wonders off on
ADAMS COUNTY, OH・12 DAYS AGO
People's Defender

By Sherry Larson Peoples’s Defender The paper is popping with Peebles this wee
PEEBLES, OH・14 DAYS AGO