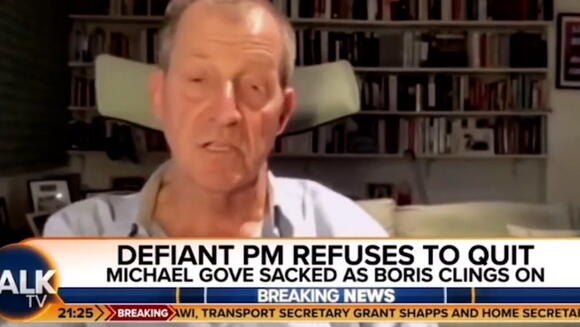 Jeremy Kyle will be standing in for Piers Morgan on Morgan’s TalkTV show Uncensored for the rest of the summer.

The presenter will take over from Morgan on the show for a five-week period, beginning at the start of August and ending on 5 September, while Morgan takes time off to film his true crime documentary, Serial Killer with Piers Morgan.

Kyle is a near-constant presence on TalkTV – his Talk Radio show is simulcast on Talk TV and he hosts opinion show The Talk with Sharon Osbourne .

He joined the network after his ITV series The Jeremy Kyle Show was cancelled, following the suicide of 2019 contestant Steve Dymond .

“I can imagine no finer broadcaster to keep my seat warm. Well, I can, but they weren’t available. I’m sure he’ll do his best,” joked Morgan.

Morgan’s show, in which he rails against “wokeness” and has interviewed figures as varied as Donald Trump and President Zelensky, has suffered a fall in ratings as steep as 80 per cent since its launch in April.

Earlier this week on TalkTV, journalist Kate McCann fainted while hosting a debate between Liz Truss and Rishi Sunak.

The showdown between the two Tory leadership contenders was brought to a dramatic halt when she fainted off-camera while Truss was speaking.

Footage of the foreign secretary’s horrified look and a loud crash were the signal that something had gone wrong during Tuesday’s debate.

Back on air on Wednesday evening, McCann said she was feeling “a little embarrassed, a little bit bruised, but glad to be back and totally fine”.

Fans of the royal family have been stunned by the “striking familial resemblance” between photographs of the Queen Mother as a child and her great-great granddaughter, Princess Charlotte of Wales.Pictures of the late Queen Mother from the archives of Glamis Castle in Scotland were revealed on the historic site’s Instagram and Twitter accounts on Monday (3 October).One photo shows the young Lady Elizabeth Bowes Lyon sitting against a stone wall in a wide brim hat and a white dress, while the second is a portrait of her holding a stalk with flowers.The castle’s social media team also posted a...
CELEBRITIES・15 HOURS AGO
The Independent

Fans have come to the defence of fashion editor Gabriella Karefa-Johnson after Kanye West singled her out on Instagram for criticising his “White Lives Matter” shirts.On Monday, West sparked backlash when he appeared at his Yeezy SZN 9 presentation in Paris wearing a shirt emblazoned with the phrase “White Lives Matter.” He later sent models down the runway in shirts bearing the same slogan, before posing for photos with controversial conservative figure Candace Owens, who was also wearing the shirt.As noted by the Anti-Defamation League (ADL), “White Lives Matter” is a “white supremacist phrase that originated in early 2015...
CELEBRITIES・3 HOURS AGO
The Independent

Kate Garraway discovers she is related to creator of Paddington Bear

Kate Garraway has discovered she is a relative of the creator of Paddington Bear, Michael Bond.The Good Morning Britain presenter, 55, was introduced to Karen Jankel, the daughter of the late author, as part of the ITV series DNA Journey.The pair have the same three times great-grandparent and shared an emotional embrace after meeting close to the London train station that bears the character’s name.The enduring children’s book character famously arrived in London from the deepest, darkest jungles of Peru and first appeared in print in 1958 in the book A Bear Called Paddington.Ms Jankel told Garraway she wanted to...
CELEBRITIES・1 HOUR AGO
Variety

British playwright, composer, songwriter actor and singer Noel Coward may have been among the first multi-hyphenates and an influencer long before there were such concepts. Coward died in 1973 at the age of 73 and will be remembered on the 50th anniversary his death with a new documentary, “Mad About The Boy — The Noel Coward Story,” due out in 2023. Contributing a cover of the title song, which was first released in 1932, is Adam Lambert, whose version — produced by Amanda Ghost and Johnny Coffer — is due out on Oct. 7. The former “American Idol” finalist and...
CELEBRITIES・22 MINUTES AGO

Jeremy Paxman has revealed he was diagnosed with Parkinson’s after a fall on icy ground while walking his dog.“The first thing I knew was when somebody was sitting me on a bench. I’d fallen over and I made a terrible mess of my face,” the 72-year-old says in Paxman: Putting Up With Parkinson’s, airing on Tuesday October 4 at 9pm on ITV.He continues: “When I was in A&E, a doctor walked in and said, ‘I think you’ve got Parkinson’s.’ And it turned out that he had been watching University Challenge and had noticed that my face had acquired what’s known...
CELEBRITIES・12 HOURS AGO
The Independent

Paxman: Putting Up with Parkinson’s review: The way he deals with his slow physical deterioration is, in its own grumpy way, inspiring

The most striking thing about Parkinson’s Disease, as we learn in Jeremy Paxman’s Paxman: Putting up with Parkinson’s (ITV), is the way that it just creeps up and mugs people. In this rather touching and very candid account of his life since he was formally diagnosed with it 18 months ago, Paxman explains that he only knew he had the condition after he’d been admitted to hospital when he slipped over on some ice and suffered some cuts to his face.“I was in a real mess in A&E, and the doctor said, ‘I think you’ve got Parkinson’s.’ And it turned out he’d been...
CELEBRITIES・3 HOURS AGO
The Independent

Jodie Turner-Smith has called Kanye West “fake” and “disgusting,” after he wore a shirt emblazoned with the phrase “White Lives Matter” on it during his YZY SZN 9 presentation in Paris on Monday.On Tuesday, the 36-year-old model slammed West’s surprise appearance at the Yeezy’s fashion show on Instagram. During that appearance, West and a group of models wore t-shirts with the phrase “White Live Matter” on it. He also posed on the runway with conservative figure Candace Owens, who was also wearing the shirt. The phrase notably first “originated in early 2015 as a racist response to the...
BEAUTY & FASHION・1 HOUR AGO
The Independent

Fans of the royal family have been stunned by the “striking familial resemblance” between photographs of the Queen Mother as a child and her great-great granddaughter, Princess Charlotte of Wales. Pictures of the late Queen Mother from the archives of Glamis Castle in Scotland were revealed on the...
CELEBRITIES・12 HOURS AGO

Saba Sams has won the BBC National Short Story Award with Blue 4eva, taken from her debut collection Send Nudes.The Brighton-born writer, 26, was praised by the judges for her “utter truthfulness” and they were particularly enamoured by the “veracity” of her writing.Blue 4eva tells the story of a 12-year-old navigating the powerplay of a newly-blended family’s summer holiday and is an exploration of sexual identity, agency, power and class.It was inspired by Sams’ memories of her own childhood holidays and was first drafted when she was a 19-year-old creative writing student at the University of Manchester.Sams said: “It’s very...
BOOKS & LITERATURE・3 HOURS AGO
The Independent

House of the Dragon star Olivia Cooke has candidly revealed that she experienced a "full mental breakdown" six years ago.The actress, who stars Alicent Hightower, the daughter of King Viserys I Targaryen’s righthand man in the Game of Thrones prequel, told The Guardian about her past mental health struggles. “It was bad, bad. Awful, actually... I was working all the way through. I was very good at hiding it," Ms Cooke said.Click here to sign up to our newsletters.
MENTAL HEALTH・12 HOURS AGO