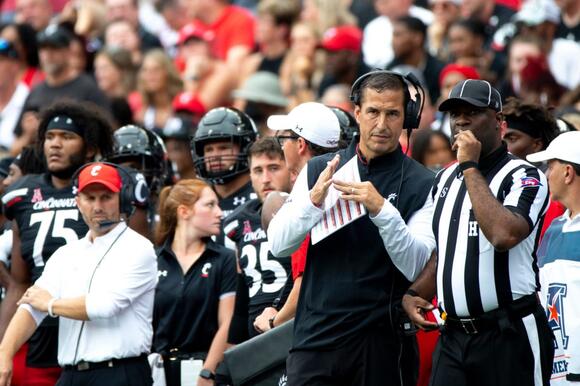 The Bearcats head coach had plenty to say during his time on the big stage.

CINCINNATI — AAC Football Media Day is in the books, and a trio of Bearcats had some interesting remarks heading into the start of fall camp this Wednesday. Here are some of the best moments from head coach Luke Fickell's time on the microphone.

On getting picked second in the AAC Media Poll:

More than anything, we have objectives and goals every year that aren't going to change based on what polls come out to be. We will use it. In some regard, we like to play from that (underdog) position a little bit more. I think our guys are far enough along that we got enough of the leaders and the older guys that understand the realities of what those things mean.

On the quarterback battle:

Well I mean there is everything to be evaluated. That's the beauty of fall camp. Obviously, the one that comes to mind is the quarterback. We haven't had a true quarterback battle in quite a while here. We've been very fortunate to have the Desmond Ridder of the world, who pretty much started for four years. So it's been kinda different going into this fall camp. Where you have the ability to focus on a lot of different things.

There is definitely a quarterback battle. As much of a battle as it can possibly be. You know you can't go live. You can't put quarterbacks live. It's just not something you do now, but knowing we have five returning starters on the offensive line and a defensive line that's kinda going to be the anchors of what we do will give us an opportunity to really challenge the rest. Challenge the quarterbacks. Challenge the backend of our defense because of a lot of new guys. So it's not that it's going to be different, but I think we can try to script it and put some of those guys in positions where hopefully we can do a better job to truly evaluate them.

On a different vibe going into camp surrounding position battles:

I definitely think going into camp it's definitely different, not that you're not battling every year and there's competitions and all different things, but this is a year where there's definitely a little bit more of an edge, there's definitely some unique battles, and it's not just at the quarterback position. But there's also some positions that maybe guys have been kind of thrust into through spring, but you really want to see what the maturity and what they've done over that time from spring. The end of spring, into summer, and into this fall camp.

So I think that you get a, I'm not gonna say there's greater energy, there was an energy last year, there's been an energy every year. But I think when you have guys in positions, your camp is different knowing that those guys haven't maybe played as many snaps, and you're gonna walk into Fayetteville, Ark. on Sept. 3, and need to be playing at your best. So there's a definite different feel and will be a different feel. I think our entire camp.

On preparing guys who haven't played as much for in-game experience:

I think the unique thing is, you know, with exception to a couple positions, I think we've got a lot more maturity than people would know. I think our leadership is more mature than maybe it even has been with, you know, with Desmond and Coby (Bryant), because our guys have come from different places and earn things in a different way. I think the uniqueness is that a lot of these guys have played, we aren't a team that just played you know, 11 guys on defense and 11 guys on offense.

I think that there has been multiple guys playing, and it doesn't happen at the quarterback position that everybody wants to talk about. And for us, it probably didn't happen as much at the corner position, just because of the two guys that we had. All of which those spots are going to be completely in challenge all through camp

I think for us, I think at the running back position, to me is more the one that you know, we got a little bit more of not sure exactly, you know, in game tight situations those are the ones that you know, to me are the ones that are a little bit more like okay, we got to find a way through this camp to figure that out because you don't go live you don't tackle nearly as much and at those positions—tailback in particular—that's what you really need to see. So the corners are gonna get challenged, you know, all through camp, we got some great wide receivers, it's gonna be a battle.

They can get some incredible experience even though it might not be as much game experience. The quarterback is going to be challenged in many different ways. I know they don't go live, but there's so many ways to be able to challenge them. It's the running backs, and it's the young guys on defense and tackling. Because those are just things you don't do nearly as much of.

Pace notched his first career TD against the Golden Hurricane.
CINCINNATI, OH・4 HOURS AGO
All Bearcats

The Bearcats haven't played Tulsa on the road this decade.
TULSA, OK・7 HOURS AGO
All Bearcats

The duo has half of UC's rushing and receiving scores this season.
CINCINNATI, OH・2 HOURS AGO
All Bearcats

Cincinnati is battling The Golden Hurricane on ESPNU.
CINCINNATI, OH・4 HOURS AGO

The Bearcats are in the mix for the top-140 prospect.
CINCINNATI, OH・6 HOURS AGO
All Bearcats

The linebacker is getting heaped with praise following his 15-tackle performance against Indiana.
CINCINNATI, OH・1 DAY AGO
All Bearcats

I filled in for Alex Frank on the final show of the week.
CINCINNATI, OH・1 DAY AGO
All Bearcats

Alex Frank and I batted around plenty of topics on Thursdays Locked on Bearcats.
CINCINNATI, OH・2 DAYS AGO

The playmaker has turned into a top-five player nationally over the past year.
CINCINNATI, OH・1 DAY AGO