The Daily Reflector has been a vital part of the life of Greenville, Pitt County, and eastern North Carolina for more than a century. The company was founded in 1882 by David Jordan Whichard and Julian R. Whichard, who bought the printing equipment from the proprietor of The Express, for whom they once worked. Moving the equipment into their mother's one-room schoolhouse, the brothers began their own weekly newspaper, The Eastern Reflector. In 1885, David Jordan Whichard became sole owner and publisher of The Reflector, beginning daily publication December 10, 1884. 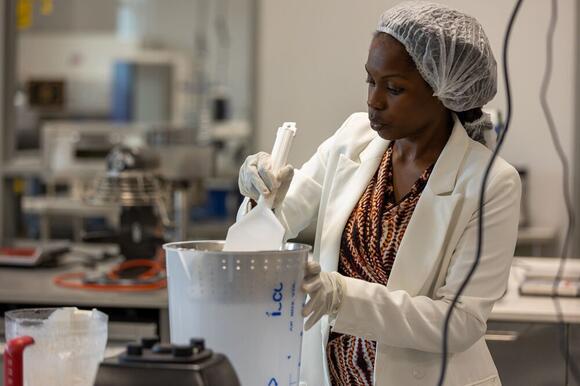 It was not a U.S. baby formula shortage that led a Greenville mother to work to develop a plant-based milk for babies and toddlers. For April Kelly, the crisis was much closer to home.

Three years ago, she was battling postpartum depression and struggling to breast-feed her newborn. Formula seemed like the only solution for Kelly and her husband, Caleb, but it ended up causing more problems for their baby girl, including intestinal gas and skin reactions.

“I was desperate to have a silent, satisfied baby and a few nights of sleep,” Kelly recalled. “That really led us to saying, ‘You know, what the heck is in infant formula? Why is she having this problem?’”

Unsure, the Kellys began experimenting in their kitchen, where necessity became the mother of invention. They concocted a plant-based formula that is free of soil, palm oil, gluten and lactose. Their product — called Sure! — is scheduled to launch in October, following a nationwide baby formula shortage that has persisted for months.

“(People) think that I just started this because of the shortage,” Kelly said. “That’s not the story at all.”

Instead, the story is how a wife and working mom, minus a degree in chemistry or nutrition, decided to enter a formula market that in America is dominated by three major companies.

“The tenacity that she has as a person outweighs any lack of knowledge of chemistry or nutrition,” said Rachel Bridgers, a business counselor with the Small Business and Technology Development Center at ECU who has worked with Kelly for two years. “She’s a mom that was looking for a solution that wasn’t presently available. She’s a great example of what’s possible when you’re willing to commit to the work and take advantage of your resources and explore options. ... She just as an appetite for entrepreneurship.”

A graduate of Farmville Central High School, Kelly, 30, was a member of Future Business Leaders of America. She began Pitt Community College as a business student but left before graduation to join the workforce. Parenthood also came early, with the Kellys welcoming their first daughter before April’s 20th birthday.

Although the young mother had successfully nursed her two older children, Tavi had been born with ankyloglossia, known as a tongue-tie, a condition that interferes with breast-feeding.

“I was drawn into this world of insanity because I didn’t have a plan,” Kelly said. “I didn’t even see it not working out because it worked so well with my daughters previously.”

The Kellys, who were following a strict vegan diet at the time, wanted to avoid infant formula made with cow’s milk. But Tavi had difficulty with soy-based formula, and her parents were hesitant to try alternative formulas manufactured overseas.

“We said, ‘Let’s dig a little deeper. Let’s see if there is a formula that could provide complete nutrition and still be a plant-based formula,” Kelly recalled. “We didn’t want to give our baby anything unhealthy. We were educating ourselves, reading the back label of the formula can dissecting every ingredient that is in infant formula (to see) if there is a way we could substitute it for a natural ingredient.”

After researching ingredients and consulting with their pediatrician, the couple created a coconut-milk based formula for their daughter. The new recipe not only helped Tavi gain weight, it helped her mom gain a following for Modern Mom Fix on Facebook and YouTube. The feedback Kelly received when she shared a video and the recipe on social media helped her decide that the formula efforts might satisfy a need beyond that of her own family.

“It was that response that we got from other women,” she said. “Moms reached back out and said, You’re on to something.’”

Kelly started in 2020 with Mark Frohman of the nonprofit SCORE, which offers free counseling and resources to people interested in starting or growing a small business. From there, she connected with Bridgers of SBTDC and began participating in business accelerator programs as well as I-Corps@ECU, a National Science Foundation-funded program that helps inventors explore the potential or their ideas, and NCGrowth, a University of North Carolina program that provides technical assistance on economic development and entrepreneurship projects.

In 2021, Sure! was among nearly two dozen businesses selected to receive a $10,000 grant from N.C. Idea, a private foundation that supports young companies.

“You don’t have to be an expert in business in order to have a great business idea or to start a business,” Bridgers said. “She is someone that has taken advantage of every opportunity and resource that has been put in front of her.”

For product development, Kelly was referred to the NC Food and Innovation Lab, a partnership between N.C. State University and the state Department of Agriculture that is dedicated to helping entrepreneurs create plant-based foods.

“There were some things that we had to tweak in order for this to be commercialized, but for the most part the base of that recipe remains the same,” Kelly said. “That’s something that we were so excited about.”

The plant-based milk, which is being produced in liquid form, is being manufactured in Raleigh for release this fall. Kelly said the company is focusing on direct sales orders through its website, though the product may be available through some small business retailers.

While she works to establish her own business, Kelly works full time in the health care staffing industry. In 2021, she gave birth to the couple’s fourth child, a son, and she is successfully breast-feeding him.

“By no means do we want to compete with breast milk,” Kelly said. “We want to be an alternative should there ever be a need.

“There are so many horror stories of moms trying what’s out there, trying some of the options that are available on the market and having terrible experiences,” she said. “When you try and you try everything that’s out there, what is left to do? As a mom, I feel like one of the things we do best is we figure it out. We are the world’s best problem solvers.”

The Daily Reflector has been a vital part of the life of Greenville, Pitt County, and eastern North Carolina for more than a century. The company was founded in 1882 by David Jordan Whichard and Julian R. Whichard, who bought the printing equipment from the proprietor of The Express, for whom they once worked. Moving the equipment into their mother's one-room schoolhouse, the brothers began their own weekly newspaper, The Eastern Reflector. In 1885, David Jordan Whichard became sole owner and publisher of The Reflector, beginning daily publication December 10, 1884.