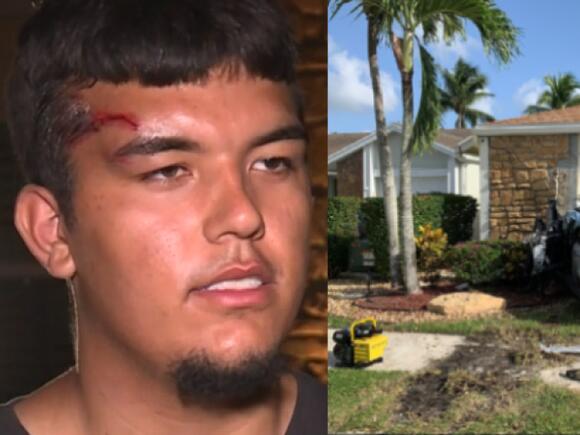 Two people were taken to the hospital after a car crashed into a house in the Country Landing One community, west of Boca Raton.

The house sits at the end of a road where witnesses said a car went through the lawn and crashed into the front of the house, hitting 19-year-old Isaiah Riley inside.

"I was in my room playing on my phone and then, next thing I know, in under 3 seconds a car is halfway through my room, blood is dripping off my face and there's glass flying through my room," said Riley.

The teen's bed was up against the wall that the car crashed through, launching him across his room into his closet doors.

"I'm just happy to be alive and that everyone is good that lives in this house," said Riley.

Riley and the driver were both taken to the hospital.

Riley was released after a few hours with a gash on his head and legs.

"I mean, I'll see how I feel tomorrow. I got too much adrenaline in my body to feel anything right now, but yeah I want to take it day by day but got to get some stuff back that was destroyed," said Riley.

His grandfather, Ross Terrano, works for a remodeling company and has been busy patching up the wall, predicting there's upwards of $40,000 in damages.

"After we witnessed what happened in there was projectiles from concrete and from the automobile that went through the wall," said Terrano.

Riley said his bed, electronics, and other furniture were all damaged but has since gotten the hole in the house patched up.

So far, no word on the condition of the driver but the homeowners said he was responsive at the time of the crash.

6-car crash on I-95 in Martin County closes all lanes, injures 7

Neighbors of missing Lyft driver: 'We love you'

The search for a missing Lyft driver is weighing on many in the Palm Beach Gardens community. Gary Levin, 74, was last seen on Monday.
PALM BEACH GARDENS, FL・2 DAYS AGO
WPTV West Palm Beach

As the search continues for Gary Levin, a missing Lyft driver from Palm Beach Gardens, WPTV is learning more about him through his brother, who also lives in Palm Beach County.
PALM BEACH GARDENS, FL・1 DAY AGO
WPTV West Palm Beach

19 migrants in custody after attempted landing near Jupiter Inlet Colony

A boat filled with migrants was spotted Friday afternoon off the coast of Jupiter with two jumping into the water and swimming to shore.
JUPITER, FL・2 DAYS AGO
WPTV West Palm Beach

A pedestrian was fatally struck by a vehicle that made an illegal U-turn late Friday in a hit-and-run, the Jupiter police department said Saturday morning
JUPITER, FL・1 DAY AGO
WPTV West Palm Beach

A man is taken to a hospital after he was shot while driving on Interstate 95 in Pompano Beach near Sample Road, not far from the Palm Beach County line.
POMPANO BEACH, FL・3 DAYS AGO
WPTV West Palm Beach

Two elderly New York residents died and a woman was critically injured when their vehicle was struck by a vehicle that ran a red light near Boca Raton on Wednesday morning.
BOCA RATON, FL・4 DAYS AGO
WPTV West Palm Beach

A 27-year man improperly riding a bicycle in the inside eastbound lane on Lake Avenue just east of the Lake Worth Beach drawbridge died in a crash with a 2015 BMW early Monday, PBSO said.
LAKE WORTH, FL・5 DAYS AGO
WPTV West Palm Beach

A 23-year-old woman is behind bars for the death of her newborn baby, deputies said. The medical examiner ruled the girl's death as a homicide, and malnutrition as the cause of death.
BOCA RATON, FL・5 DAYS AGO
WPTV West Palm Beach

Gary Levin, a Lyft driver from Palm Beach Gardens, has been missing since Jan. 30. His car was found in North Carolina on Thursday.
PALM BEACH GARDENS, FL・2 DAYS AGO
WPTV West Palm Beach

A cosmetic surgeon is sounding the alarm about the dangers of a new plastic surgery trend that many celebrities are flocking to.
BOCA RATON, FL・3 DAYS AGO
WPTV West Palm Beach

Police have arrested a gunman, they said, shot and killed a man in front of a convenience store in Riviera Beach.
RIVIERA BEACH, FL・4 DAYS AGO