Cara Delevingne addresses viral red carpet photos of her and Megan Thee Stallion: ‘I was hyping her up’ 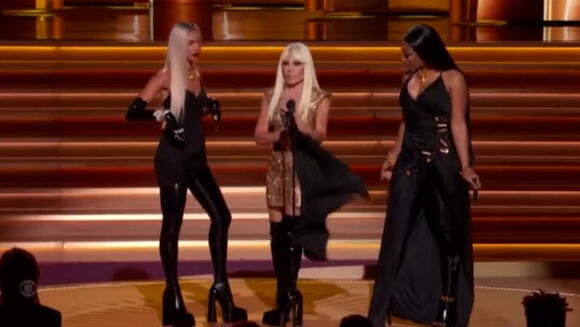 Cara Delevingne has addressed the viral photos of her helping Megan Thee Stallion with her dress on the red carpet at the 2022 Billboard Music Awards .

The model talked candidly about the meme-worthy moment with the rapper during an appearance on The Tonight Show Starring Jimmy Fallon , and explained how she ended up in attendance at the May awards show.

“So basically I was kind of working as her [personal assistant], I needed a side job,” Delevingne joked, before telling Fallon that she had actually been in Las Vegas, Nevada, with friends at the time and “really wanted” to see Megan Thee Stallion perform. “I was in Vegas with friends, I really wanted to see her play and she asked me to come along with her,” she said.

Lest you forgot, the photos being discussed captured Delevingne poking her head out from around a corner, and later, standing off to the side and lifting the train of the rapper’s dress as she posed for photos on the red carpet. The images sparked a range of confused responses, and memes, at the time prompting fans to question why Megan was joined by the Only Murders in the Building actor.

According to Delevingne, she was on the red carpet to assist Megan ahead of the awards show, carrying a clipboard and helping the rapper memorise her acceptance speech for Top Rap Female Artist.

As for the viral photos of her throwing Megan’s train in the air, the 29-year-old said that she was simply “hyping” the rapper up and helping her get the “fashion” shot.

“I was helping her and I was doing it, and I was going like, ‘Yeah girl!’ I was hyping her up, being a hype woman,” she said.

Delevingne also addressed the photos showing her sitting near the stage during the awards show, with the model telling Fallon that she walked in and had a seat in the front row, at which point she noted that she was “not meant to be here”. However, she acknowledged that that hadn’t stopped her from lying on the floor to take photos of the attendees. “That’s what I do, I was just really excited,” she said. 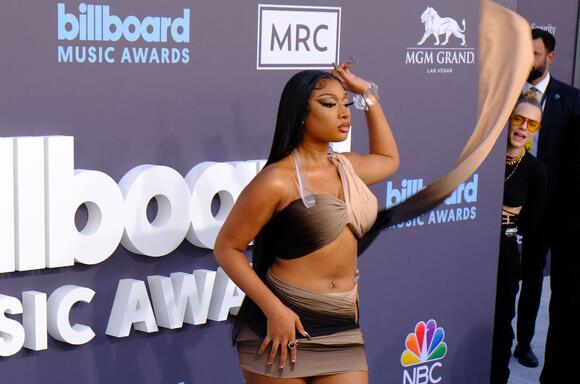 Ultimately, the model said that she was living her “best life” during the awards show, and that she has “no shame”.

“I was living my best life, but people found it a bit odd. People find me a bit odd, but that’s me. No shame,” she said.

Kelly Clarkson Lit Up The Stage In A Low-Cut Black Dress—She Looks Incredible!

Kelly Clarkson made a stunning appearance at the 74th annual Emmy Awards in Los Angeles last week, rocking a glamorous, classic LBD! The “Since U Been Gone” hitmaker, 40, rocked a low-cut, floor-length, long-sleeved black gown by Gucci with pleated detailing and an overall draping, goddess-like fit. The Kelly Clarkson Show host attended the Microsoft Theater event and presented Zendaya with her historical ‘Outstanding Lead Actress in a Drama Series’ with a smile, as her shimmering accessories shined in the stage lights.
LOS ANGELES, CA・1 DAY AGO
The Independent

Sylvester Stallone and his wife Jennifer Flavin are reportedly back together, one month after the former model filed for divorce from her husband of 25 years. On Friday, Page Six reported that a representative for the 76-year-old actor said that he and Flavin have rekindled their relationship and were very “happy”.
CELEBRITIES・1 DAY AGO
The Independent

Charlize Theron explains why she turned down relationship during pandemic: ‘I just feel so out of practice’

Charlize Theron has spoken candidly about her hesitations when it comes to romantic relationships, with the actor revealing that she feels “so out of practise”.The Snow White and the Huntsman star, 47, opened up about her dating life, and the relationship she nearly entered during the pandemic, in a new interview with Harper’s Bazaar.According to Theron, who said she is currently single, she met someone during the pandemic who was interested in “doing this thing with me”.However, the actor said she ultimately turned down the opportunity with the unnamed individual because she wasn’t sure if she wanted to be...
CELEBRITIES・2 DAYS AGO
TMZ.com

Todd Bridges, who famously played Willis on "Diff'rent Strokes," has tied the knot for a second time ... this time with a low-key Bev Hills ceremony. Sources at the wedding tell TMZ ... Todd married a woman named Bettijo on Wednesday at Greystone Mansion & Gardens, and it was an intimate and exclusive affair for those closest to the bride and groom.
BEVERLY HILLS, CA・1 DAY AGO

Olivia Wilde and Florence Pugh did not have a “screaming match” on the set of Don’t Worry Darling, according to the film’s crew.The psychological thriller, which was released on Friday (23 September), has been plagued with reports of behind-the-scenes drama, in particularly regarding an alleged feud between director Wilde and star Pugh.A recent report by Vulture, citing an anonymous source who spent a significant amount of time on set, alleged that the pair even once got into a verbal altercation on set.According to the source, news of the hostility got back to studio executives, with Warner Bros’s Toby Emmerich...
MOVIES・7 HOURS AGO
The Independent

Strictly 2022: Shirley Ballas gets ‘muddled up’ in scoring blunder during first live show

Shirley Ballas found herself in “a bit of a muddle” during the first Strictly Come Dancing live show.The new series kicked off on Saturday (24 September) as all 15 couples danced together for the first time.You can find out about all the couples competing on Strictly 2022 here.Second to dance were Kiss FM DJ Tyler West and his professional partner Dianne Buswell, who performed the American Smooth to “Falling” by Harry Styles.The couple received a mixed reception from the judges, but were praised by head judge Ballas, who said that West “just put [Buswell] in the most beautiful space”...
TV SHOWS・9 HOURS AGO