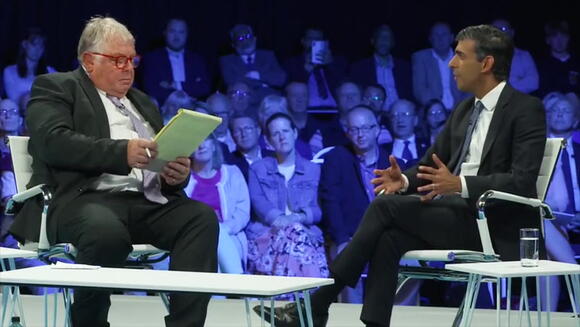 Rishi Sunak has said Margaret Thatcher was best leader of the Conservative Party, during the first Tory hustings in Yorkshire.

“She delivered multiple election victories and changed this country for the better,” Sunak said.

When asked how be thought Thatcher would respond to him being the first chancellor since 1974 to raise corporation tax, Sunak said: “I think she would have responded, as I have done, in gripping inflation first.”

Liz Truss and Rishi Sunak went head-to-head in the first official hustings on the evening of 28 July.

A blueprint for the future of the UK being drawn up by former prime minister Gordon Brown will be both a “safer” and “more radical” alternative to Scottish independence, the Labour conference will be told.Shadow Scottish secretary Ian Murray will tell the gathering in Liverpool that Mr Brown’s proposals are “nearing completion”, with the document to be launched “in the coming months”It comes after Labour leader Sir Keir Starmer asked the former PM to head up a special commission to look at the future of the UK.It will set out both a safer and more radical offer for change than...
POLITICS・1 HOUR AGO
The Independent

Sir Keir Starmer has faced fresh demands to pave the way for Jeremy Corbyn to stand as a Labour candidate at the next general election.Former Labour leader Mr Corbyn remains a party member but sits in the Commons as an Independent MP after having the whip withdrawn due to his response to an Equality and Human Rights Commission report into antisemitism in the party.But some party delegates have forced a vote on a proposed rule change in a bid to allow Mr Corbyn (Islington North) to be re-selected as a Labour candidate.Always gives me great pleasure to welcome @UKLabour to...
ELECTIONS・8 HOURS AGO
The Independent

Labour’s deputy leader Angela Rayner has warned that Liz Truss shows “all the signs of allowing another wave of Tory sleaze to fester” after it emerged that her No 10 chief of staff Mark Fullbrook was being paid through his lobbying firm.Also accusing Ms Truss’s new administration of “miring itself in sleaze, not even a month into the job”, the Lib Dems’ Daisy Cooper claimed it was “proving to be nothing more than the same as Boris Johnson’s”.However, the tax cuts announced in new chancellor Kwasi Kwarteng’s mini-Budget on Friday saw disagreement among the Labour Party as its annual conference got underway in Liverpool.Labour leader Sir Keir Starmer said he would reverse the decision to get rid of the top rate of tax for the highest earners, but would keep the planned 1p cut to the basic rate of income tax.However, Andy Burnham, the Greater Manchester mayor, said he believed both should go, saying: “I don’t think it’s a time for tax cuts, it’s a time to support people through this crisis.”
POLITICS・4 HOURS AGO
The Independent

Sir Keir Starmer will resist pressure from within his own party to reverse Liz Truss’s 1p cut for basic-rate taxpayers because of fears it could deal a fatal blow to Labour’s chances of victory at the coming election.The Labour leader dramatically pledged to reinstate the 45p income tax rate for Britain’s wealthiest people, abolished by chancellor Kwasi Kwarteng in his mini-Budget on Friday in what Sir Keir described as a “wrong-headed” Tory policy to “allow the rich to get richer”.But he was facing demands to go further by restoring the 20 per cent basic rate of the levy, due...
INCOME TAX・4 HOURS AGO

Labour in line for a big majority while Boris Johnson could lose his seat, poll suggests

Sir Keir Starmer could secure a comfortable 56-seat majority for Labour and unseat Boris Johnson at the next general election, according to a new poll released on the first day of the party’s annual conference in Liverpool.The Savanta ComRes survey of more than 6,000 voters put Labour a clear 12 points ahead of the Conservatives, on 45 per cent, with Liz Truss’s party on 33 per cent.It suggests that there has been no “Truss bounce” for the Tories following the election of their new leader at the start of September, with the Conservative Party down two points and Labour...
ELECTIONS・6 HOURS AGO
The Independent

Boris Johnson made a significant verbal slip-up as he thanked Vladimir Putin instead of Volodymyr Zelensky for his “inspirational leadership”.In his first major contribution as a backbench MP during a Commons debate, the Conservative former prime minister said it is important to “double down in our defence of the Ukrainians” if Mr Putin doubles down on his “aggression”.As he listed the reasons why Ukraine’s counter-offensive is proving to be successful, though, Mr Johnson inadvertently thanked Mr Putin for his “inspirational leadership”, before quickly correcting himself and thanking Mr Zelensky.He said: “Thanks to the heroism of the Ukrainian armed forces,...
POLITICS・2 DAYS AGO
The Independent

A Labour government would create a state-owned investment fund to back projects which could generate wealth for the nation.Shadow chancellor Rachel Reeves will use her speech at the party’s conference in Liverpool to set out the plan, which would begin with an initial £8.3 billion investment to fund green industries.Ms Reeves has the main speech at the gathering on Monday, but party leader Sir Keir Starmer will also appear at the conference alongside former England footballer Gary Neville.Ex-Manchester United defender Neville used a Daily Mirror interview to brand the tax cuts announced by Chancellor Kwasi Kwarteng “immoral” and “madness”.The Sky...
ECONOMY・1 HOUR AGO
The Independent

Chancellor hints more tax cuts are on the way

Kwasi Kwarteng claimed his tax cuts “favour people right across the income scale” amid accusations they mainly help the rich, and hinted more are on the way.The Chancellor and Prime Minister Liz Truss defended the biggest programme of tax cuts for 50 years, which he announced on Friday using more than £70 billion of increased borrowing.Analysis suggests the measures, which include abolishing the top rate of income tax for the highest earners, will see only the incomes of the wealthiest households grow while most people will be worse off.But Mr Kwarteng insisted he is “focused on tax cuts across the board”.When it...
INCOME TAX・1 HOUR AGO

#The Conservative Party
The Independent

Labour should be bold on energy policy, union boss says

A senior union leader has urged Labour to be more bold to press home the “clear blue water” that now exists between the party and the Government.Unite general secretary Sharon Graham spoke to union members in Scotland while Labour’s annual conference was being held in Liverpool.She said “trickle down” economics will fail, pointing to the huge profits made by energy firms.“This is one area where bold Labour policies could exploit the ‘clear blue water’ that exists between the party and Government priorities.“Figures exposing rampant profiteering, on their own, practically establish the need for the renationalisation of energy.“A windfall tax might...
ENERGY INDUSTRY・7 HOURS AGO
The Independent

‘A matter for the Bank of England’: Liz Truss refuses to discuss if UK in recession

Liz Truss has refused to discuss fears that the UK is already in recession, insisting the downturn in the economy is “a matter for the Bank of England”. The Bank issued the warning last week – as it hiked interest rates to 2.25 per cent, their highest level for 14 years – but the prime minister argued it was not her responsibility.
ECONOMY・7 HOURS AGO
The Independent

Liz Truss is paying a lobbying company for the services of her chief of staff, the government has admitted, triggering Labour condemnation.In an unprecedented arrangement for such a senior aide, Mark Fullbrook receives his salary as a contractor through the firm, Fullbrook Strategies, he set up in April – rather than as an employee.Previous holders of the key No 10 role have been treated like any other special adviser by being appointed on a temporary civil service contract and paid a salary that is made public.Angela Rayner, Labour’s deputy leader, called the admission “shocking”, saying it “raises serious questions...
U.K.・5 HOURS AGO
The Independent

A Labour government would give taxpayers a stake in British industry with the creation of a national wealth fund that would invest billions of pounds in green businesses over the next decade, the party says.The money created would be ploughed back into local areas, Rachel Reeves will pledge in a speech to the Labour conference in Liverpool. As well as providing skilled jobs, she promised “wealth that will flow back into your community and onto your high street. Wealth that the British people will own a stake in”.Labour also accused the Conservatives of letting good jobs go overseas during...
INDUSTRY・1 HOUR AGO

Voices: It’s not just the right that’s in thrall to the fantasy of trickle-down economics

The phrase “trickle-down economics” is rearing its ugly head in the news again, following the appointment of Liz Truss as prime minister and the introduction of “trussonomics”.The new chancellor, Kwasi Kwarteng, has introduced the largest package of tax cuts since 1972. All economic policies that emphasise tax cuts disproportionately benefit the wealthy, but the particulars of Trussonomics thumb the scale more than most: analysis by the Resolution Foundation has found that almost two-thirds of the benefits of these new tax cuts will go to the 20 per cent of households with the highest income.This move is widely seen as...
WORLD・7 HOURS AGO
The Independent

The former deputy chief whip at the centre of the controversy that led to Boris Johnson’s demise will not be investigated by Parliament’s watchdog over allegations of drunken groping at a private members’ club, it is understood.Chris Pincher dramatically quit his Government role on June 30 after allegedly assaulting two fellow guests at the exclusive Carlton Club in London the evening before.Mr Pincher was the Tory MP for Tamworth in Staffordshire but now sits as an independent in the Commons after Mr Johnson bowed to pressure to remove the Conservative whip after a formal complaint was made to the parliamentary...
PUBLIC SAFETY・3 HOURS AGO
The Independent

Voices: Tin-eared Truss is about to embark on the greatest betrayal of animal rights imaginable

The new prime minister, Liz Truss, has a funny relationship with animals. She says she’s a cat lover, but she has previously called for the return of foxhunting.As a former environment secretary, she should be aware of animal sentience – the capacity non-humans have to feel emotion, pain and suffering. But as a Tory leadership candidate, Truss held up a vision of a neoliberal administration that she was convinced would appeal to the party faithful.Now, as part of that single-minded deregulation mission, she looks set to embark on the greatest betrayal of people and animals anyone could ever have...
ANIMALS・8 HOURS AGO
The Independent

National Trust: Government going in ‘opposite direction’ to protecting nature

The National Trust has criticised the Government for going in the “opposite direction” to supporting the environment with policies laid out in the mini-budget.The charity joins several organisations which have criticised the Government over its planned policy announced by Chancellor Kwasi Kwarteng on Friday.This includes proposals for 38 investment zones – areas in England where the Government will loosen planning rules in order to release more land for commercial and housing developments.Conservationists have expressed concern that there are no provisions in the policy to safeguard environmental assessments in the planning process.Rather than ramp up action to support our environment, this...
POLITICS・6 HOURS AGO