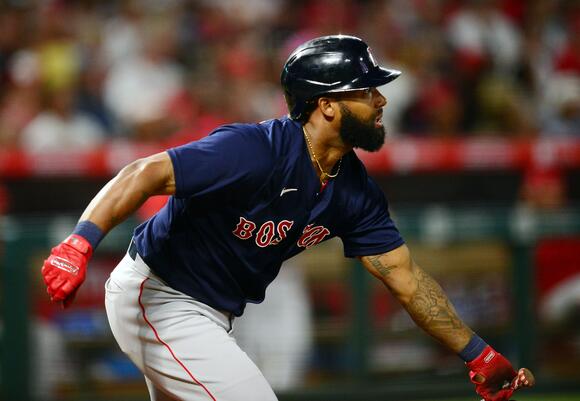 The World Series is back on!

The Red Sox signed infielder Danny Santana to a minor-league deal Thursday, giving the organization another body for its 40-man roster. (@RedSoxStats noticed the signing first .)

And that’s really all one can say about Santana. He hasn’t played this season after being suspended 80 games by MLB in April for violating their Joint Drug Prevention and Treatment Program.

Santana played sparingly for the Red Sox last season, appearing in 37 games and posting a modest slash line of .181/.252/.345 in 127 plate appearances. He hit a home run in his first at-bat with the Red Sox, and the highlights ended there — outside of two runs he scored against the Rays in the ALDS.

Santana has a career .709 OPS, though that’s misleading. He’s only posted an OPS above .600 twice in his eight-year career.

It’s possible the Red Sox will use Santana at first base (he played 13 games there last season), considering their dumpster fire platoon of Bobby Dalbec and Franchy Cordero. Boston has the 28th-best OPS at first base in the league.

Santana almost certainly won’t offer much improvement in that department. But maybe he can actually play the position, unlike Cordero.

The Boston Red Sox players and coaches did their part in saluting Dennis Eckersley on the day he retired from broadcasting in the NESN booth, coming out to applaud Eck during the fifth innin.
BOSTON, MA・1 DAY AGO
WEEI Sports Radio

The future is now here for the Boston Red Sox, with the page turning toward figuring out what is going to happen when it comes to Rafael Devers, Xander Bogaerts and Co.
BOSTON, MA・1 DAY AGO
WEEI Sports Radio

Dennis Eckersley was holding back tears during his final sign-off

Dennis Eckersley got choked up when signing off from his final Red Sox broadcast on NESN Wednesday. Players and fans at Fenway Park gave him a standing ovation as well.
BOSTON, MA・23 HOURS AGO
WEEI Sports Radio

Xander Bogaerts got the moment he deserved

It might not have come under ideal circumstances, but Xander Bogaerts’ grand slam was a fitting moment for the shortstop as he heads into an uncertain future.
BOSTON, MA・2 DAYS AGO

J.D. Martinez: 'I have always rewarded the teams that believed in me'

Heading into the final game of the 2022 season, Boston Red Sox designated hitter J.D. Martinez sat down with the Bradfo Sho podcast to talk why he is optimistic about his future.
BOSTON, MA・2 DAYS AGO
WEEI Sports Radio

Don Orsillo and Dennis Eckersley worked together for many seasons calling Red Sox games for NESN. Orsillo recorded a heartfelt video tribute for Eck ahead of his final game.
BOSTON, MA・2 DAYS AGO