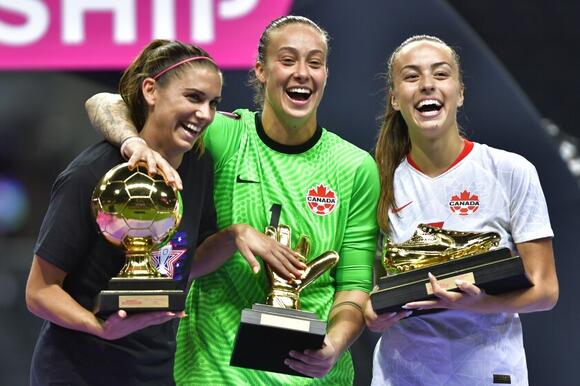 The moment had unfolded, what, 20 times before? U.S. soccer superstar Alex Morgan lining up for a penalty kick attempt against Canadian goalkeeper Kailen Sheridan, one of the best ball-stoppers on the planet.

They had squared off again and again amid the relative quiet of the San Diego Wave FC training facility at Surf Sports Park.

This, though, was not that.

This was the CONCACAF women’s final July 18, in front of 17,247 in suburban Monterrey, Mexico. This guaranteed a spot at the 2024 Olympics in Paris. This decided an international championship.

This was … something else .

“I knew there was a possibility it could happen,” Morgan said Wednesday.

It’s important to first understand how closely matched the U.S. and Canada find themselves. The Canadians beat the Americans in the 2021 Olympic semifinals 1-0 on a penalty kick in the 74 th minute — the exact score of the three most recent matchups between the countries.

Then you find yourself 1-on-1 against a respected coworker with all the things on the line that were on the line. And in the face of all that uniquely awkward pressure, you … smile.

Why? Because the universe gets twisted and weird like that sometimes.

“We had a little joke on stage afterwards,” Sheridan said. “Just like, ‘Of course, it had to be the two of us.’ ”

The universe decided to potentially pester a San Diego workplace in the 78 th minute, when American Rose Lavelle found herself grass-bound in the box. Though Lindsey Horan initially grabbed the ball, she gave way to Morgan for the penalty kick.

“I walked away to try and get in their heads,” she said. “At the moment Lindsey picked up the ball, I was like, ‘Cool. I’m going to get in her head, I’m going to mess her up.’ So I walked away, almost to the sideline, just to make her think longer.

“As I was coming back, she gave Alex the ball. I just started laughing. It’s just funny, you know?”

Sheridan pulled back the curtain to reveal the thinking as the situation dramatically changed.

The Canadian team had combed through video and data of Morgan, trying to mine tendencies, comfort levels and success rate. Data, though, fail to give the full picture of Morgan, who’s playing perhaps the best soccer of her life at 33.

The data said left side. As Sheridan dove that direction, Morgan went right.

“When somebody’s that diverse, you have to take a gamble sometimes,” Sheridan said. “If I gambled right (from her view), we look like geniuses for going through all that film. But sometimes you get it wrong.”

“I decided before I took it, going right,” Morgan said. “You usually go by instinct. I used to go left a lot, earlier in my career. Now, I go left, right, center. I try to mix it up.”

The international showdown became a statement-maker for the Wave, a debut franchise shattering expectations in the National Women’s Soccer League. The Wave, which next plays Saturday at Chicago, lead the 12-team league with 22 points through 13 matches. The U.S. CONCACAF team also included San Diego’s Naomi Girma and Taylor Kornieck.

When the final concluded, players were brought to a stage. Morgan was named the tournament’s best player, while Sheridan earned the honor of top goalkeeper. When the awards were presented, Sheridan draped an arm around Morgan, the player who scored on her.

“I would trade that award for the No. 1 spot every day of the week,” Sheridan said. “At the same time, you come back (to San Diego) with two players on top out of three. That’s pretty damn good.

“I think it makes a statement about how we work here and the kind of club we are. Obviously, Alex is a massive name. But at the same time, it shows the amount of work that goes in.”

Sheridan said pain remains the price of playing for things that matter.

“You’re incredibly disappointed in those moments, but I’ve learned in my career that you can’t just live the disappointment your whole life,” she said. “At the end of the day, we can come back and be great teammates with each other. If it had to be somebody, I guess it’s OK it was her … for now.”

“We’re both playing some of the best football in our careers, together in San Diego,” she said. “What we’re building here is special.”

So, how did all those Surf Sports Park matchups shake out?

“I’m not really focused on the goalkeeper in training,” Morgan said. “I’m more focused on me and what I’m trying to work on. I’m not tallying goals and saves.”

Sheridan is keeping track of something else.

“We go back and forth,” she said. “Last time it was us (in the Olympics). They won this time. Next time it will be us, right?”

Without Griner, US using versatile posts Stewart and Wilson

Brittney Griner anchored a dominant frontcourt that made the U.S. women's basketball team the favorites in any international tournament
BASKETBALL・2 HOURS AGO
San Diego Union-Tribune

Romain Langasque tied the course record at the Old Course at St. Andrews by shooting 11-under 61 in the first round of the Alfred Dunhill Links Championship
GOLF・2 HOURS AGO
San Diego Union-Tribune

NFL teams use new rights to jockey for fans, revenue in UK