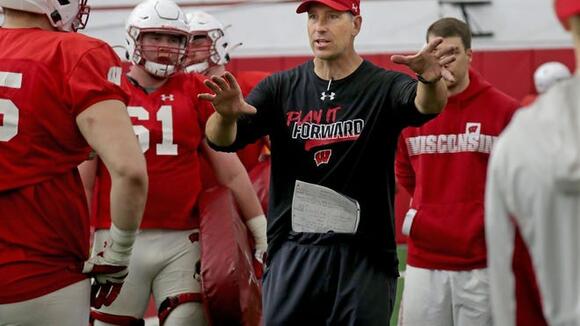 INDIANAPOLIS – Mark D’Onofrio wasn’t a factor when Paul Chryst brought in a veteran assistant in late February to coach Wisconsin’s inside linebackers.

Less than four months after he was hired, Bill Sheridan was out as UW’s inside linebackers coach because of an ongoing NCAA investigation and D’Onofrio had taken his place, back in football for the first time since the 2018 season.

How did Chryst and UW reach this point?

Speaking Wednesday during Day 2 of the Big Ten preseason meetings, Chryst explained Sheridan told him during the interview process he was being investigated for a potential minor NCAA violation during his two seasons at Air Force (2020 and 2021).

“He kept me (informed) from the very first time we talked,” Chryst said. “You didn’t know the way it would be handled. That is one of those … I’m anxious to tell people what happened. I can’t right now, but it’s ridiculous.”

Why did UW need a new coach for inside linebackers?

Chryst needed a new inside linebackers coach because he moved Bob Bostad back to the offensive line to replace Joe Rudolph, who left for Virginia Tech after the Las Vegas Bowl.

“It wasn’t a long time with him,” Chryst said, “but I really appreciate Bill.”

Sheridan resigned on May 13 in the wake of a report he committed NCAA violations while at Air Force. Sheridan didn't want the investigation to have a negative effect on UW.

“He was great,” Chryst said, referring to Sheridan’s decision to resign. “He didn’t want to take away anything from the team.”

Less than a month later, the 53-year-old D’Onofrio was announced as his replacement.

D’Onofrio played linebacker at Penn State from 1988-91, was a second-round pick of the Green Bay Packers in 1992, suffered a career-ending hamstring injury in his rookie season and then compiled an impressive coaching résumé that spanned from 1999-2018.

D’Onofrio’s résumé includes serving as the defensive coordinator at Temple, Miami and Houston. He was fired late in the 2018 season by then-Houston head coach Major Applewhite and has not coached in college since.

“The first thing you do is talk to guys on your staff,” Chryst said in describing how he started the process of looking for Sheridan’s replacement. “And then I had a couple of guys I reached out to and a couple guys reached out to me.

“I felt he had a chance to give to our players what we felt like we needed. Felt pretty fortunate, actually, with the timing.”