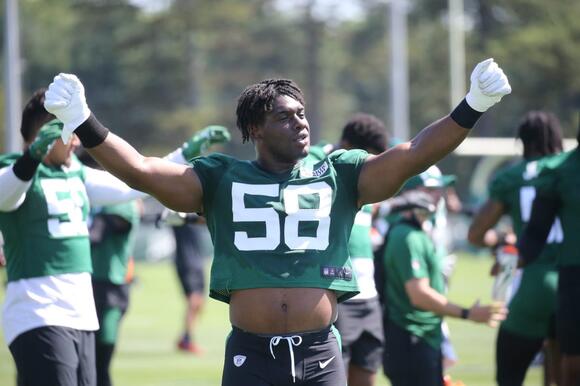 Lawson returned to practice on Wednesday for the first time since he ruptured his Achilles last spring, missing all of the 2021 season

For the first time since he ruptured his Achilles last August, Jets defensive end Carl Lawson rejoined his teammates at practice on Wednesday, taking the field for New York's first training camp workout.

Even for a specimen like Lawson, a player that's overcome serious injuries in the past, this journey back to the practice field was as challenging as you'd expect.

"It was horrible," Lawson told reporters on Wednesday. "It is what it is, you grow stronger from it. Of course it was tough, it was ridiculously tough. But I knew I was going to come out on top."

Lawson previously recovered from two different ACL tears. One occurred during his tenure with the Bengals. The other while he was at Auburn.

"You kind of build a callus to things, you just keep working and keep the process," he explained. "Some of the greatest people in history have suffered and overcome, so it’s kind of the people that don’t overcome that don’t get the results they want."

Lawson, 27, signed with New York in the offseason before the 2021 season, poised to wreak havoc in green and white as the Jets' premier edge rusher. With a season-ending Achilles injury before the campaign even began, he missed the entire season, pushing his debut back to this fall.

Some players require extra time when attempting to recapture their dominance between the lines coming back from this type of injury. Lawson never considered that adjustment period. His mission since last spring was to come back better than he ever was.

“I was working two weeks ago and I was like, 'oh yeah, I’m fast,'" he said. "There was never a point where I was like, 'I want to get back to myself.' It was always I want to be better than what I was. So I never put a timeline on when I was going to be back where I was previously."

Considering the numbers Lawson produced before joining the Jets—leading all defensive linemen in 2020 with 32 quarterback hits—this edge rusher is poised to take this club's pass rush to the next level.

"He’s a freak," Jets head coach Robert Saleh told reporters. "I’m telling you, he was ready to practice at OTAs, it’s just we have to protect Carl from Carl in terms of the amount of work he has to do because he won’t stop unless we tell him to stop. So, we're excited to have him back."

Defensive tackle Quinnen Williams called Lawson a freak this week as well, adding that he's an "animal" up front.

Headlining a deep group on the defensive line, New York can ease Lawson back over the next few months. If healthy, he'll be a spark and produce top-shelf numbers, leading one of this team's strongest position groups to battle each Sunday.

Follow Max Goodman on Twitter ( @MaxTGoodman ), be sure to bookmark Jets Country and check back daily for news, analysis and more.