Mekhi Becton Reacts to Position Change: 'It's a Work in Progress' 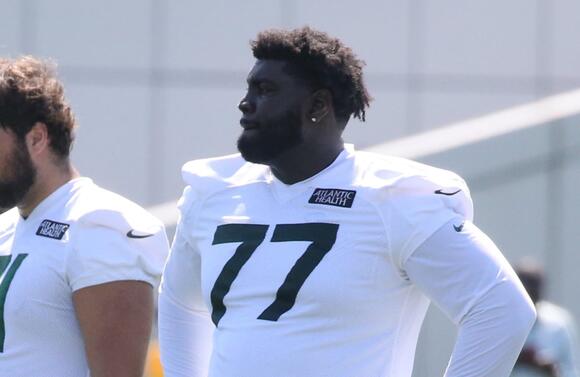 His days as a left tackle aren't necessarily over, but the plan is for Becton to line up on the right side for the foreseeable future, with George Fant continuing to hold it down at left tackle.

Asked about the change in positioning, Becton told reporters on Wednesday that it doesn't matter where he's lining up on the offensive line. The most important thing is that he's on the field, healthy and contributing to his team.

“I’ve just got to change my technique up," Becton explained. "As long as I’m on the field, it don’t really matter to me. I just know I have to do different things on the right side than I do on the left. I’m still getting used to that. It’s a work in progress.”

Becton missed just about all of last season, his sophomore year, after going from Louisville to the Jets with the No. 11 pick in the first round in 2020. After sustaining a season-ending knee injury less than 50 snaps into the 2021 season, his weight and bust-like tendencies have dominated storylines.

Returning to practice in green and white on Wednesday, Becton couldn't stop smiling throughout his first training camp presser of the new year.

"Can't wait to do it tomorrow," he said, gushing over the chance to take the field again with his teammates.

Becton went on to explain that while it might seem easy to make a transition to a new spot on the offensive line, this is more than just simply mirroring his moves. The tackle understands that it's more complex.

Nonetheless, learning that he'll be at right tackle this early in the process gives the 23-year-old a chance to get acclimated to his new position. He'll have plenty of time to work with right guard Alijah Vera-Tucker as well, another recent first-rounder for general manager Joe Douglas and the Jets.

“I’ll still do my own type of work on the side. Just practice isn’t going to be enough to get where want to be,” he said.

Follow Max Goodman on Twitter ( @MaxTGoodman ), be sure to bookmark Jets Country and check back daily for news, analysis and more.