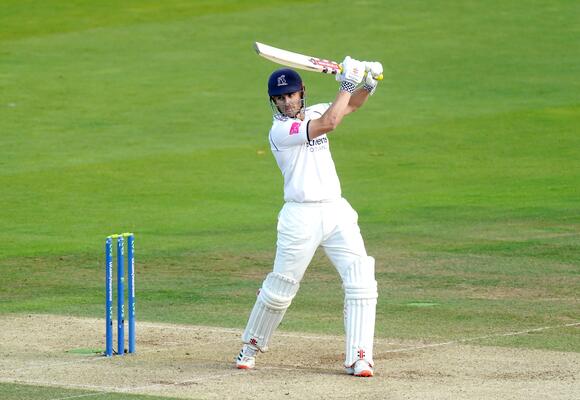 Sam Hain’s unbeaten 87 in an unbroken stand of 127 with Will Rhodes enabled the Bears to reach a second innings 270 for four.

Alex Davies also contributed 49 as leaders Surrey , for whom Will Jacks took two wickets, head into the final day trailing by 207 runs.

Mid-table Yorkshire made 272 in their second innings to set Hampshire a 214 victory target, with the visitors closing on nine without loss.

Wicketkeeper Jonny Tattersall top-scored for the hosts with 63, opener Adam Lyth made 59 and Matthew Waite contributed an important 47.

All were handed lives as Hampshire dropped six catches that could prove costly in the final title reckoning.

Third-placed Lancashire did their best to keep title hopes alive by turning around their contest with Kent at Emirates Old Trafford.

Rob Jones chipped in with an unbeaten 53 and skipper Steven Croft made 41 as Lancashire, 125 behind on first innings, closed at 377 for five – a lead of 252.

Australian batter Matt Renshaw made a Championship-best score of 146 for Somerset against Essex.

Renshaw spent six hours and 34 minutes at the crease and shared an unbroken partnership of 193 with Tom Abell before the Somerset captain was forced to retire hurt on 90 after appearing to damage his hamstring.

The visitors ended the day on 359 for three in reply to Essex’s 505, still 146 behind heading into a final day, with the draw seemingly the likely outcome at Chelmsford.

The 19-year-old shared a key ninth-wicket stand of 78 with Ben Sanderson (38) as the visitors extended their first innings score from an overnight 353 for seven to 479 all out, a lead of 162.

Left-arm spinner Zafar Gohar finished with five for 134, but his efforts appeared to be in vain.

Gloucestershire had slipped to 135 for five by stumps in their second innings, still 27 behind, despite a plucky 62 from Marcus Harris.

In Division Two, Derbyshire’s victory hopes against Worcestershire at New Road were held up by the weather.

Derbyshire set the home side a 289 target after Anuj Dal had scored an unbeaten 112 from 217 balls.

Worcestershire slipped to 108 for five before bad light and rain saw play called off for the day at 5.10pm.

Ben Aitchison was again the chief thorn in Worcestershire’s side with figures of 15-7-27-3 taking his wicket tally to seven in the game.

Sussex seamer Robinson proved deadly with the new ball for the second time, reducing the Division Two leaders to 40 for three in their second innings.

But Nottinghamshire recovered to reach 284 for seven – a lead of 381 – with Haseeb Hameed making 94 and Lyndon James 56.

Earlier, Nottinghamshire pace bowlers James Pattinson and Dane Paterson finished with five wickets each as Sussex, next to bottom of the table, were bowled out for 143 in reply to the hosts’ first innings 240.

John Simpson defied Durham with a brilliant century to steer Middlesex to near parity with one day remaining at Seat Unique Riverside.

The 34-year-old continued his impressive Championship form, scoring an unbeaten 132 to guide the visitors out of potential trouble at 201 for five.

Middlesex were 417 for seven at the close, trailing the home side’s first-innings total by just four runs.

Glasgow will host the starting point for the world’s longest non-stop baton relay ever attempted as it passes hosting duties to Egypt for Cop27, having hosted Cop 26 last year.Thousands of runners, cyclists and sailors will work together to pass a relay baton hand-to-hand from Glasgow across more than 7,000km to Sharm el-Sheikh as part of Running Out of Time.Starting at Glasgow Green on Friday, around 2,000 school pupils from across the city will join organisers for a 2km run around the green.The relay baton message will be read out by a pupil at Sunnyside Primary School before being sealed...
WORLD・57 MINUTES AGO
The Independent

A new state-of-the-art television studio has opened in Glasgow’s Kelvin Hall in what has been hailed as a “new and exciting chapter” for the iconic building.The BBC Studioworks facility, which launched on Friday, will meet the growing demand for production in Scotland as well as supporting the growth and development of Scotland’s creative workforce.Taking up 10,500 square feet of Kelvin Hall, the purpose-built studio has been created with funding from the Scottish Government and Glasgow City Council.The chief executive of BBC Studioworks, Andrew Moultrie, said the studio was a “new and exciting chapter” for the company which is a subsidiary...
ENTERTAINMENT・3 HOURS AGO
The Independent

The Queen died from old age, her official death certificate has revealed.The document released by National Records of Scotland noted the time of the Queen’s death on Thursday September 8 as 3.10pm at Balmoral.When paying tribute to her mother the Queen, the Princess Royal revealed she was with the head of state in her last moments.Anne, who accompanied her mother’s coffin as it travelled from Balmoral to London, via Edinburgh, said: “I was fortunate to share the last 24 hours of my dearest mother’s life.”The princess is named as the “informant” on the document and would have notified the...
CELEBRITIES・4 HOURS AGO