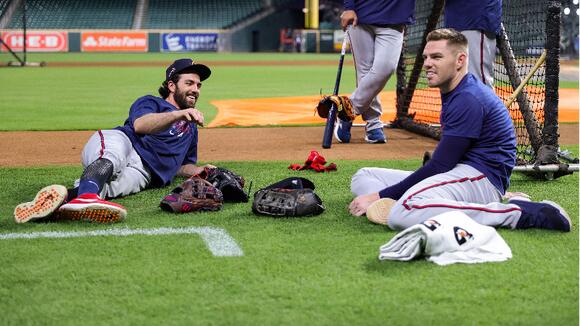 The Freddie Freeman situation seemed like it was resolved in March.

Freeman’s split with the Atlanta Braves, which resulted in Alex Anthopoulos trading for Matt Olson before Freeman even signed with the Los Angeles Dodgers, was controversial in the moment. Now, after Freeman’s emotional return to Atlanta when the Dodgers played at Truist Park, there is all sorts of debate about the role his since-fired agent Casey Close had in the debacle.

It’s a mess, one that certainly feels like it will take a long time to actually resolve. However, one of of Freeman’s ex-teammates, Dansby Swanson, thinks it all might be overstated.

“I think at the end of the day, the entire story was a little blown out of proportion, we’ll just leave it at that” Swanson said Tuesday on the "Pat McAfee Show” .

“I think whenever stories come out,” Swanson later said, “It is always the negative repercussions of things that happened. And to be honest, to me, that’s news media in general these days, right? Every story you get is negative and being conditioned to blow the negative things up and not reward for good behavior. It’s like if your parents only got onto you for doing the wrong thing instead of reinforcing what it is you should be doing more often.”

Ultimately, the chatter around this situation probably isn’t going to mellow out anytime soon. It might very well be all blown out of proportion, but the reality is it, at least outwardly, seems like an odd situation, and people are going to be fascinated by that.

Mets were willing to play in Atlanta Thursday; Braves declined

There’s a very real chance that the winner of the National League East will be decided during a three-game series between the New York Mets and Atlanta Braves this weekend at Truist Park.
QUEENS, NY・1 DAY AGO
Sports Illustrated

The 20-year-old will join the club for this weekend’s pivotal series against the Braves.
QUEENS, NY・21 MINUTES AGO
Audacy

Marlins’ Richard Bleier on balking three times in one at-bat: ‘I was like, what is going on right now?’

Marlins reliever Richard Bleier went on The Dan Le Batard Show with Stugotz to talk about his bizarre Tuesday night, balking three times in a single at-bat against the Mets.
MIAMI, FL・1 DAY AGO
Audacy

Kyle Schwarber (jokingly) boos David Ross, who had booed him a day earlier

David Ross and Kyle Schwarber, former teammates on the Cubs, have had an entertaining back-and-forth this week with the Phillies in Chicago.
PHILADELPHIA, PA・1 DAY AGO

Should Aaron Judge be viewed as true record-holder? Twitter debates

After slugging his 61st home run of 2022, tying an American League record set 61 years ago by fellow Yankee Roger Maris, does Aaron Judge have a legitimate claim to being MLB’s single-season home run king?
MLB・20 HOURS AGO
Audacy

Video surfaced earlier this week of Angels slugger Mike Trout declining to sign autographs for two young fans outside his hotel, stirring an online debate about autograph etiquette and how much privacy celebrities should be afforded.
MLB・1 DAY AGO