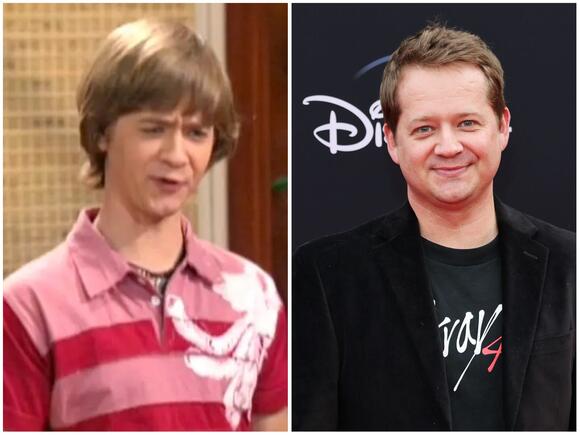 " High School Musical: The Musical: The Series " star Julia Lester told Insider that season three guest star Jason Earles has been working as a mentor to the cast since the first season.

Earles, best known for his role as Miley Cyrus' brother Jackson Stewart in the 2000s "Hannah Montana" series, makes an appearance as camp director Dewey Wood in the season premiere of the "High School Musical" spinoff series, which was released Wednesday.

Lester, who plays lead character Ashlyn, revealed to Insider that the actor has been working as a mentor to the main cast and was ironically nicknamed "camp counselor."

"He's our dialogue coach in technical terms, but he's really like an acting coach and mentor," Lester said. "Since season one, we've called him camp counselor as a joke. And now he, like, literally is like a camp counselor. Well, he's camp director."

Lester continued: "It was so much fun and, literally, he wore so many different hats in the show, but also figuratively. One second he would be bringing the house down with laughter on camera and then the next day helping us with a really intense emotional scene and being so invested. I'm like, 'Oh my God, a childhood idol in front of my eyes acting.' It's amazing."

The series' showrunner Tim Federle told Insider that it felt like he and Earles were the only adults on set.

"I remember Dar Renee season one walked onto set and was like, 'What is Hannah Montana's brother doing here? I'm so intimidated. I wasn't intimidated before,'" Federle said. "And I was like, 'No, no, no, he's here to help.' So to get Jason's comedy chops in the show is such a blast."

In an interview with People , Earles explained that he was brought in by former Disney Channel casting head, Judy Taylor, to make sure the cast was in a "safe environment" for their mental health and personal development due to their young age. The main cast was all between the ages of 15 and 21 when the show first aired.

Earles, who was 29 when he first played 16-year-old Jackson in "Hannah Montana," also noted the similarities between Olivia Rodrigo's stardom and Miley Cyrus' rise in the mid-2000s.

"For me, what has been mindblowing is I was there during Hannah Montana, and I watched Miley turn into the biggest pop star in the world overnight," he told People. "The show premiered, we told them, 'She's a pop star,' [and] suddenly, she was a pop star."

He continued: "And then Olivia Rodrigo when 'Drivers License' dropped, the world just decided that she was the biggest pop star on the planet. It happened so quickly. It was so shockingly similar to Miley's rise that I was like, 'How can I possibly be this close to this twice in one lifetime?' It's just fascinating to see in the front row as it goes down."

Lautner appeared on the latest episode of the Dear Media podcast "The Toast" and said that the competitiveness was "a little bizarre."
2 DAYS AGO
Insider

The most shocking moments from Netflix's Pamela Anderson documentary, explained by the director

Finn Wolfhard said that Winona Ryder is also "one of the funniest texters ever" because she'll ghost conversations she started.
1 DAY AGO
Insider

"I think I even accepted the offer the next day," McConaughey revealed in a Vanity Fair oral history on the rom-com.
1 DAY AGO
Insider

Melinda Dillon, the Oscar-nominated actress best known for playing Ralphie's mom in 'A Christmas Story,' has died at 83

According to an obituary shared by People, Dillon died on January 9. No cause of death was given in the announcement.
LOS ANGELES, CA・22 HOURS AGO
Insider

Witherspoon said on "Jimmy Kimmel Live!" that she and Kutcher sent videos to each other to get to know each other before shooting the film.
IOWA STATE・2 DAYS AGO
Insider

The daughter of "Westworld" star Thandiwe Newton and notable movie director Ol Parker weighed in on the "nepo baby" debate.
2 DAYS AGO
Insider

"Ant-Man" star Kathryn Newton also said she didn't get to play golf with Bill Murray in London because "it turns out Marvel movies are very intense."
CALIFORNIA STATE・2 DAYS AGO
Insider

Austin Butler says he's finally 'getting rid of' his Elvis accent: 'I have probably damaged my vocal cords'

Since starring in the Baz Luhrmann film, Butler has used his Elvis accent in numerous public appearances. He says the accent is going away.
2 DAYS AGO
Insider

Jennifer Grey followed Jamie Lee Curtis's wig advice when transforming into diet guru Gwen Shamblin: 'I do what she says'

'The Last of Us' star Bella Ramsey thinks it's 'important' to depict LGBTQ love in a post-apocalyptic world: 'It's not like all the gay people got blown up'

"The Last of Us" episode three featured an expansion of an LGBTQ storyline from the game, starring Nick Offerman and Murray Bartlett.
LOS ANGELES, CA・1 DAY AGO
Insider

In a recent interview with Vanity Fair, Kendrick reacted to scenes from her past films like "Pitch Perfect," and "The Twilight Saga: Eclipse."
20 HOURS AGO
Insider

'The Last of Us' star Nick Offerman says he almost passed on his role until his wife Megan Mullally read the script: 'You have to do this'

Nick Offerman said that he originally didn't have time in his schedule to take his much-praised role in "The Last of Us" episode three.
2 DAYS AGO
Insider

Kylie Jenner and Travis Scott threw a birthday party for their daughter Stormi, which included a nod to the tragic Astroworld music festival in 2021.
2 DAYS AGO
Insider

Bautista said on "The Late Late Show with James Corden" that he wants to star in every genre but has yet to get roles in the "rom-com space."
3 DAYS AGO
Insider

Taylor Lautner revealed that working out so hard for the "Twilight" movies caused body image issues for him.
1 DAY AGO
Insider

Finn Wolfhard was 'really proud' of his 'Stranger Things' costar Noah Schnapp after he came out: 'I just had a big smile on my face'

Finn Wolfhard said that he was happy for his "Stranger Things" costar Noah Schnapp after he came out as gay on social media.
2 DAYS AGO
Insider

Tarek El Moussa of "Flip or Flop" and Heather Rae of "Selling Sunset" planned to conceive via IVF before getting pregnant naturally in early 2022.
1 DAY AGO