What to Expect From Jets’ Elijah Moore This Season 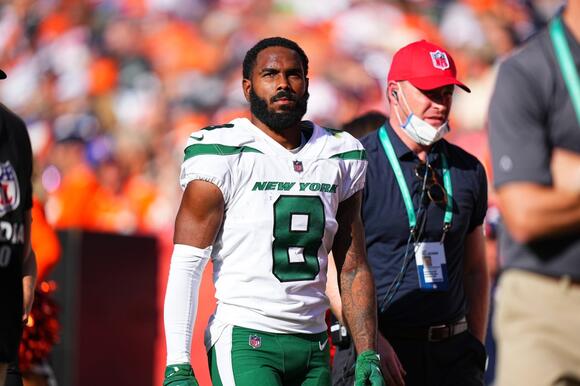 Unmet expectations are the source of disappointment.

With that said, what should Jets’ fans expect from their second-year wide receiver Elijah Moore this season?

To look forward, requires a look back at his solid rookie year.

It is fair to say it was a “tale of two seasons.”

Up until Halloween, Moore posted domestic rookie numbers, but down the stretch, he started coming into his own.

Moore, who was a high second-round draft choice out of Ole Miss, started looking like he was quickly developing into a solid No. 2 WR in his last six games before being put on injured reserve (quad).

During the season, Moore’s final numbers that he tallied were 43 receptions (77 targets) for 538 yards (12.5 average) and 5 touchdowns.

Not great, but not bad either, and that summarizes how Moore looked on game film.

While he did have a long of 62-yard touchdown, by no means did Moore show he will ever develop into a viable deep target or into a team’s No. 1 go-to-receiver.

That 62-yard long traveled around 22 yards in the air, and Moore did the rest of the damage running after the catch.

Moore is a decent role player who has an uncanny ability to create separation in the short to intermediate route levels.

What should fans expect this season?

Moore showed last year he is a quick learner. There’s no reason to expect him not to continue to develop.

How much playing time will Moore have in 2022?

That’s a bit more of a wildcard.

The main concern with Moore is circling back to the 43 catches on 77 targets.

This means Moore was able to only come away with 56% of the passes intended for him. Part of that is Jets’ quarterback Zach Wilson’s erratic ball placement and part of that is Moore’s limitations, which he will likely not be able to correct.

That is a lot of passes (44%) to be missing for whatever the reason.

Grade: B- (Good player, but not elite; he’s good enough to win with)

Tough scrappy athletic receiver with average hands and catch radius and below average ability to adjust to and high point deep passes. Ordinary looking get-off. Looks good on bubble screens and has ability to pick up yardage after the catch when a defensive back is not right on him. Excellent ability to make quick little move in the midst of a route to gain route leverage and create separation at the intermediate route level. Excels at any route short to intermediate that features a breakpoint where he can cut or hook back and use his body to shield corners. Struggles on passes high/low or thrown off-target. Could not get away from tight coverages to pick up yardage after those catches. Great overall veteran type of route runner who also excels at finding soft spots in zone. Smooth gliding strider with above average speed. Does not have the speed to take the top off a defense. He was not competitive enough on 50-50 deep jump balls. Below average ability to time jumps. Struggles to adjust on long throws. Willing to stick his nose in as a run blocker. Able to take a hand off and run a Jet sweep effectively. Demonstrative after scoring touchdowns.

While many fans may automatically expect Moore to be the Jets’ No. 2 WR this season, I would not be so fast with that assumption.

The forgotten man in this equation at wideout is Corey Davis, who is in the midst of a three-year, $37.5 million dollar deal.

Davis missed eight games last season (injuries), but when he did play he had 34 catches (59 targets).

That works out to Davis only being able to haul in about the same percentage of catches (58%) as Moore.

However, the difference again is Davis is in the midst of that three-year, $37.5 million dollar deal.

In order for Moore to overcome Davis for that No. 2 spot, he will need to catch everything thrown in his direction starting day one in training camp.

Follow Daniel Kelly on Twitter (@danielkellybook). Be sure to bookmark Jets Country and check back daily for news, analysis and more.