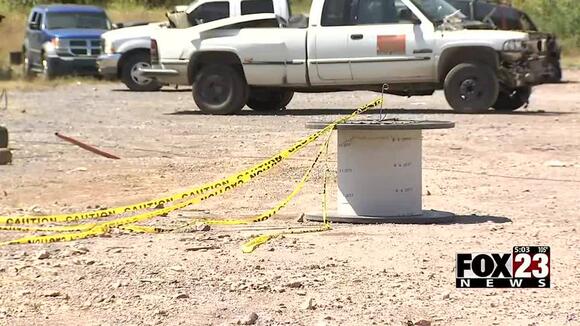 TAHLEQUAH, Okla. — A man arrested for murder in Cherokee County told sheriff’s investigators he doesn’t know where the shotgun is that he used to kill a man because he threw it into a random pickup truck as it drove by the crime scene after he, and his alleged accomplice, were done cleaning things up.

The Cherokee County Sheriff’s Office arrested Joe Garcia and Michael Clark in connection to the death of Andrew Hopkins.

“This was a brutal murder. He’s trying to make it sound like it wasn’t,” said Cherokee County Sheriff Jason Chennault after Garcia was arrested and confessed to the crime. “What he told us is what we found at the scene, but his story is very self-serving, and it downplays what really happened.”

Hopkins’ body was found under the Welling Bridge southeast of Tahlequah earlier this month by people driving in the area. Chennault told FOX23 it was easy to see that Hopkins had been murdered from the moment investigators arrived on the scene.

Eventually, an informant would come forward and tell investigators that he saw Hopkins’ body inside Garcia’s commercial buildings near the State Highway 51 Spur and West Choctaw Street. That would be enough to bring Garcia in for questioning.

After being brought in for a second time, Garcia confessed to killing Hopkins, and he claimed Hopkins had been stealing from him and that is why he ended up shooting him.

“He says the victim Andrew Hopkins was stealing from him, and he confronted him. Garcia says he blacked out, but he remembers shooting [Hopkins] with a shotgun,” Chennault said.

Eventually, Michael Clark would also be arrested for helping to clean up the crime scene after Hopkins was killed, but it’s what happened during the clean up that remains a mystery to investigators because the murder weapon hasn’t been found yet.

Garcia claimed the 12 gauge pump-action shotgun used to kill Hopkins is gone, and he doesn’t know where it is. According to Chennault, Garcia said he went out to get some fresh air while he was cleaning up the crime up, and when he went outside, he took the shotgun with him. He then walked towards Highway 51 and threw the gun in the back of a random pickup truck passing by. The gun landed in the bed of a pickup, and Garica said whoever was driving the truck didn’t see or hear him throw a gun in the back and drove off with the gun.

“We don’t really buy the story, just because it’s too farfetched in our minds, but if anyone out there finds a 12 gauge shotgun in the back of their vehicle that does not belong to them and shouldn’t be there, we need to know about it,” Chennault said.

It’s possible the gun has also been dumped, like Hopkins’ body, but until it’s recovered, anyone who drove through the westside of Tahlequah earlier this month in a pickup and found a random gun is asked to call Cherokee County Sheriff’s Office because they could unknowingly be in possession of a murder weapon. They are not in trouble for having the gun. Investigators said they are just looking to recover it for the prosecution of Garcia and Clark in the future.

Chennault said Garcia had help dumping the body by the Welling Bridge, but the driver of the vehicle will not be charged because he never saw a body while helping Garcia dump what he assumed to be trash that Garcia needed help disposing.

It appears Garcia and Clark are the only suspects who will be arrested for Hopkins’ murder at this time, according to Chennault.

CLAREMORE, Okla. — Four people were arrested after Claremore police say they sold vaping products to a 16-year-old. Investigators and the teenager went into four different stores in the city. The teenager successfully bought products at three of the stores; Cali Culture, Buy-N-Bye, and Mo and Sam’s Corner.
CLAREMORE, OK・12 HOURS AGO
FOX 23 Tulsa KOKI

TULSA, Okla. — An arrest report reveals new details into what led up to the stabbing of Tulsa County District Attorney (DA) Steve Kunzweiler. According to police, Kunzweiler was stabbed by his daughter, Jennifer Kunzweiler. Jennifer was booked into the Tulsa County jail Saturday night after spending days in...
18 HOURS AGO
FOX 23 Tulsa KOKI

Alleged rapist in custody after victim shoots him following attack

TULSA, Okla. — Warning: this article contains descriptions of sexual assault. A man has been arrested after Tulsa police say his alleged victim shot him in the foot. Officers responded to a shooting Sunday afternoon near MLK Boulevard and E. 56th Street N. When they arrived, officers found Wilfredo Gomez with a gunshot wound.
TULSA, OK・14 HOURS AGO
FOX 23 Tulsa KOKI

TULSA, Okla. — Authorities say a man was hit by a suspected drunk driver in Tulsa Sunday evening. The Oklahoma Highway Patrol (OHP) said just before 7 p.m., 70-year-old Curtis Kelsey and another man were working on a broken down vehicle on Interstate 244 westbound east of North Mingo Road. A tow truck was there with emergency lights activated.
TULSA, OK・19 HOURS AGO

TULSA, Okla. — Tulsa police said a man was shot in the foot after he said two juveniles stole from him. Police said around 5 a.m. they found one man with a gunshot wound to his foot near East Admiral Place and North Harvard Avenue. The victim said two...
TULSA, OK・19 HOURS AGO
FOX 23 Tulsa KOKI

TULSA, Okla. — The Tulsa County Sheriff’s Office (TCSO) confirmed to FOX23 Sunday there was no shooting at the Tulsa State Fair. Social media posts claimed there was shooting at the fair last night which caused a panic for those at the fair and those with loved ones at the fair. The posts started a panic amongst fairgoers, and people rushed and ran for cover Saturday night.
TULSA, OK・1 DAY AGO
FOX 23 Tulsa KOKI

TULSA, Okla. — Tulsa police said two more victims were hit by gunfire at McLain High School Friday night, in addition to the two victims already reported. Tulsa Police Chief Wendell Franklin said told FOX23 radio partner, KRMG, Monday morning two more people were shot at the school, and made it to the hospital on their own. In total, four people were shot, including a McLain student that died.
TULSA, OK・18 HOURS AGO

Okla. woman sentenced to life for murder in a 1999 domestic violence case may get new trial

TULSA, Okla. — The attorneys for a woman in prison for fatally shooting her ex-fiancée filed the paperwork for a Post-Conviction Relief, which they hope, will eventually free her from prison. April Rose Wilkens has spent 25 years of her life in the Mabel Bassett Correctional Center for...
TULSA, OK・14 HOURS AGO
FOX 23 Tulsa KOKI

SKIATOOK, Okla. — The Oklahoma Highway Patrol (OHP) is searching for a man at Skiatook Lake Monday. OHP’s Marine Enforcement Division says they are searching for Terry McGee, who went into Skiatook Lake to help two children who were tubing on the water. A spokesperson for OHP confirmed the two children are safe but the McGee never came back to the surface.
SKIATOOK, OK・17 HOURS AGO
FOX 23 Tulsa KOKI

TULSA, Okla. — Tulsa police identified the 17-year-old victim killed after a football game at McLain High School on Friday. Police said Terron Yarbrough was shot and killed following the game. Police have not identified the other 17-year-old shot at the game, or the two additional shooting victims reported...
TULSA, OK・15 HOURS AGO

CRAIG COUNTY, Okla. — The Oklahoma Highway Patrol (OHP) said a man was hit and killed while driving a golf cart in Craig County in September. According to an OHP report released Monday, a golf cart driven by 60-year-old Stephen King on Sept. 21 was stopped in a driveway off U.S. Highway 59 west of St. Louis Street in Welch waiting on traffic to clear.
CRAIG COUNTY, OK・15 HOURS AGO
FOX 23 Tulsa KOKI

TULSA, Okla. — FOX23 has been investigating a string of mail thefts across Green Country. Criminals have been breaking into the blue collection boxes outside of post offices in Tulsa and Owasso, forcing employees to tape the bins shut to protect people from thieves. Now, the National President for...
TULSA, OK・10 HOURS AGO
FOX 23 Tulsa KOKI

TULSA, Okla. — There’s a call for unity as the McClain and north Tulsa community deal with the aftermath of the shooting at McClain high school. The shooting happened near the football field at McClain while the players were on their field at the end of the homecoming game with Miami. The violent incident left a 17-year-old dead and another 17-year-old injured.
TULSA, OK・1 DAY AGO
FOX 23 Tulsa KOKI

TULSA, Okla. — The Tulsa Health Department is now offering flu vaccines. While the vaccine won’t necessarily keep you from getting certain strains of the flu, it will make the illness less severe if you get it. Health officials recommend that everyone over the age of six gets...
TULSA, OK・11 HOURS AGO
FOX 23 Tulsa KOKI

TULSA, Okla. — McLain High School announced Sunday evening that classes will be cancelled Monday, Oct. 3. This decision comes in the wake of a deadly shooting on McLain High School’s campus late Friday night. One 17-year-old boy was shot and killed, and another 17-year-old was hospitalized after being shot.
TULSA, OK・1 DAY AGO
FOX 23 Tulsa KOKI

MIAMI, Okla. — Miami Public Schools has halted travel to Tulsa McLain for student activities following a deadly shooting at a football game on Friday. A 17-year-old boy was shot and killed and another teen was wounded after football play wrapped up for the night, Tulsa police said. Police...
MIAMI, OK・2 DAYS AGO