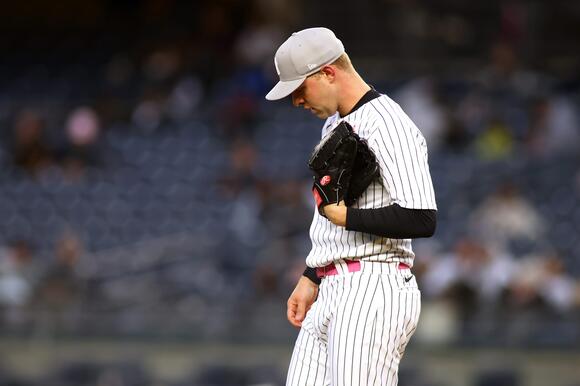 The Yankees confirmed the bleak outlook for Michael King on Saturday afternoon, announcing that the righty reliever had been transferred to the 60-day IL with a right elbow fracture.

King, in the midst of a career year as one of the most valuable relievers in the American League, suffered the injury after throwing a pitch in the eighth inning of Friday's win against the Orioles, and is very likely done for the season.

To replace King, the Yanks called up former hyped pitching prospect Clarke Schmidt, and signed a familiar face in Shane Greene to a major league deal. Greene pitched a full season for the Yankees in 2014, was an All-Star in 2019, and has thrown just two big league innings this season, with the Dodgers.

Joe Benigno is fed up with James McCann, says Tomas Nido should play all meaningful games

After being in first place for all but two days, Mets' season comes crashing down in Atlanta

The Mets were in or tied for first place every day but two from April through September - and now, after being swept in Atlanta, they’re one Braves win or one loss away from heading to the Wild Card Round.
QUEENS, NY・19 HOURS AGO
WFAN Sports Radio

Joe Benigno was predictably furious with Jacob deGrom after Friday’s start, and says Max Scherzer is the unquestionable ace of the Mets staff.
QUEENS, NY・2 DAYS AGO
WFAN Sports Radio

Marinaccio left Sunday’s game in the eighth inning due to the issue, which has lingered off and on all year. He had tests earlier this season that came back fine, and he is hopeful that will again be the case Monday.
BRONX, NY・1 DAY AGO

Joe Benigno rips the Mets after collapse in Atlanta: 'They blew the freakin' division!'

The Mets needed just one win in Atlanta to enter the final series with their own NL East destiny in their hands. Instead, they got swept, and Joe Benigno was absolutely LIVID in his hit with Tiki & Tierney Monday.
QUEENS, NY・15 HOURS AGO
WFAN Sports Radio

Domingo German has been solid in the rotation since returning from the IL, but if the Yankees want him in a bullpen role in the playoffs, he will be ready.
BRONX, NY・2 DAYS AGO
WFAN Sports Radio

After Jacob deGrom surrendered three home runs in a loss to the Braves, callers phoned in to Joe Benigno’s Saturday show and ripped him apart.
QUEENS, NY・2 DAYS AGO
WFAN Sports Radio

Clay Holmes is likely done for the rest of the regular season due to a shoulder strain, but he is “very optimistic” that he will be ready for the ALDS.
BRONX, NY・2 DAYS AGO

Zack Britton shut down for year with left shoulder fatigue

The Yankees announced Saturday morning that reliever Zack Britton is done for the year, as he was placed on the 60-day IL with left shoulder fatigue.
BRONX, NY・2 DAYS AGO
WFAN Sports Radio

“This was worst-case, absolutely pathetic, so disappointing, and now, after leading the division almost every single day this year, when it counts, they’re not, and that just flat-out sucks!” Gio exhorted to open Monday’s show.
QUEENS, NY・18 HOURS AGO
WFAN Sports Radio

Marinaccio threw a 1-1 pitch to Jorge Mateo for a ball, and then was approached by third baseman Josh Donaldson, who sensed something was amiss - and indeed, Marinaccio left the game.
BRONX, NY・1 DAY AGO
WFAN Sports Radio

On the day Aaron Judge will try again for 62 (weather permitting), we celebrate the 61st anniversary of Roger Maris’$2 61st home run, hit on this day in ‘61.
MLB・2 DAYS AGO

Judge hit No. 61 in Toronto and went homerless on the Yankees’ final homestand - but his focus, even with the Yankees playing for nothing in Texas, is on preparing for the postseason.
BRONX, NY・1 DAY AGO
WFAN Sports Radio

Yankees manager Aaron Boone hopes Giancarlo Stanton’s struggles are still timing related and not due to lingering discomfort in his Achilles.
MLB・2 DAYS AGO